"I’ve been able to watch a few 155-pound title fights and see those guys
fight, and I always like to say that I'd love to be the Godfather of
the lightweight division." - Jens Pulver 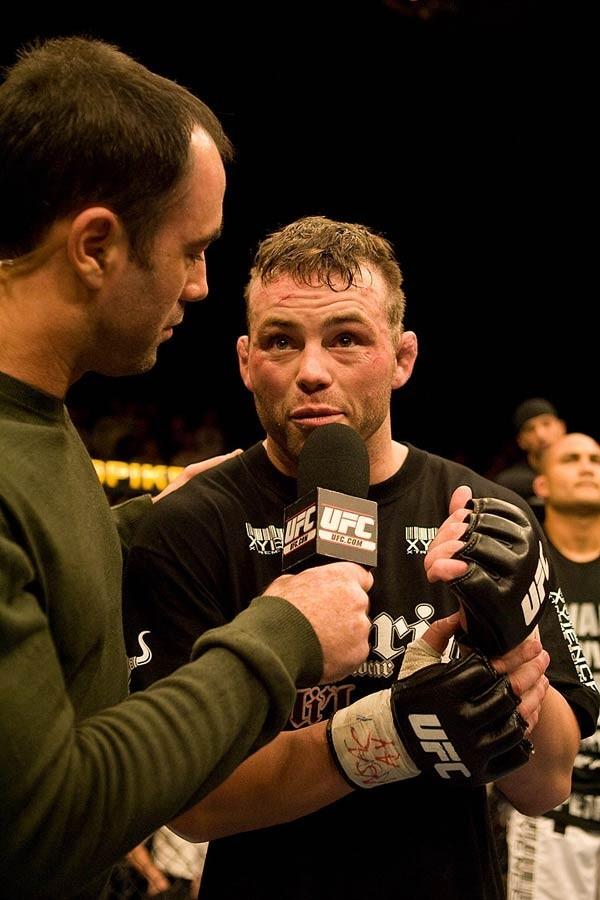 It may have been Jens Pulver’s definitive knockout win, a first round blitz of John Lewis at UFC 28 in 2000 that has lived on in highlight reels ever since. It was also a fight that probably shouldn’t have happened.

“Nobody knows how badly injured I was and how beat up I was before that fight,” recalled Pulver. “I was bedridden for two weeks, with the sciatic nerve firing down my leg. It was so bad. I didn’t know how I was gonna stand up, let alone fight, cut weight and do all this stuff.”

Pulver’s coach, Pat Miletich, had a plan though. He couldn’t cure his fighter’s injury, but he could give him the advice he thought would end the bout as soon as possible. So beds and tables were shifted around the hotel room in Atlantic City, New Jersey, allowing the two to get in some last minute tactical sessions.

On fight night, Miletich repeated the instructions and added one more reminder:

“Remember, you’ve got your teammates and your family in your left hand, and you’ve got God in your right,” he said.

15 seconds after the opening bell, Pulver was back with his teammates, celebrating the victory. One win later, “Lil’ Evil” was the UFC’s first 155-pound champion, which went by a different name than it does now.

“The first belt I won, it actually says bantamweight on it,” he said. “And then they switched it to lightweight later.”

It’s a reminder of how far the sport has come as the UFC celebrates its 20th anniversary this week. Back when Pulver turned pro in 1999, there were no featherweight, bantamweight, or flyweight divisions, let alone a 155-pound class, and even once that came around, the Washington native was still undersized. But the way he saw it, at least he could compete on a fairly even playing field there and not have to contend with monsters like his MFS Fighting Systems coach Miletich and teammate Matt Hughes.

“People were telling me I was going to have to go to 170,” he said. “And I remember saying that if I knock enough people out, they’ll start a 155-pound division, and I was happy to have that. I never wanted anybody to say that I was too small to fight in the UFC. I didn’t want to have to go through that.”

Turns out he didn’t have to, and after winning that first 155-pound title in 2001 by defeating Japanese star Caol Uno, he successfully defended the crown once against Dennis Hallman before meeting up with unbeaten phenom BJ Penn. A prohibitive underdog, many felt Pulver simply had no chance of beating the Hawaiian in the first 155-pound main event in UFC history – UFC 35 – in January of 2002.

“It was a lot of fun being around the guys that I was with and working out and training, but I just felt so disrespected,” said Pulver of the lead-up to the fight. “I don’t know how I lost that anger when I got older, maybe it’s just a young man’s thing (Laughs), but I felt so disrespected that I couldn’t wait to get out there. When you looked at it on paper, I wasn’t supposed to be anywhere near that title fight. I wasn’t supposed to be the main event, I definitely wasn’t supposed to beat him if you look at credentials. I probably should have just walked out there and laid it on the floor and said ‘here ya go.’ But boy, those first two rounds, it was horrible. And then something just snapped and I started to turn it around. I was the angry little badger I guess.”

That angry little badger roared back in the final three rounds of the fight, taking a majority decision win to retain his title. It was one of the most emotional wins you will ever see.

Pulver would leave the UFC in a contract dispute after the bout, but after years of fighting here and abroad, he returned in 2006 and went on to coach season five of The Ultimate Fighter against Penn, who defeated Pulver in their 2007 rematch. He wasn’t done yet though, as his six fight stint in the WEC helped propel that organization and the lighter weight classes forward once again. These days, he’s proud to look back at what he had a huge role in starting.

“I’ve been able to watch a few 155-pound title fights and see those guys fight, and I always like to say that I'd love to be the Godfather of the lightweight division,” he said. “To me, it’s really special to watch those title fights, and when I see the little guys do their thing, yeah, it makes me proud. Even in boxing, when there was no outstanding heavyweight, the little guys always kept it alive, and in combative sports as a whole, we’re like the little cockroaches. (Laughs) That’s our job. We fight like we have to knock people out like a heavyweight and scrap like a couple badgers the entire time, and it’s a good base to have. So while it sucks to get old, look at what I was a part of, look at what I got to be a part of that was being built, and I’m a proud papa.”

Now at 38, Pulver remains one of the sport’s most beloved figures, and you can usually tell when he’s somewhere by the crowd of fans around him. And having seen him in action, he will never turn anyone away.

“I was always thankful, and I thank them,” he said. “Even then, I knew two things: this isn’t gonna last forever, at least fighting wise, and I would look at it like this: you see people that are broke down on the side of the road and cars are just whipping by, or you see somebody struggling and people just walk on by because they have their own world and they’re busy doing whatever it is they’re doing. So it’s an incredible thing when people will stop and take five minutes out of their day, or they’ll wait in a line and gather just to say hi to you. I’ve been extremely grateful because they’re taking time out of their schedule to say hello to me. The last thing I’ll ever do is give them a stiff arm or say ‘I’m way too busy right now.’ I can’t do it. Probably one of the greatest gifts I’ve been given is that will people will stop and remember me.”

That’s a gift he’ll be receiving for a lifetime.