"I always thought I was the best in the world and could beat anybody. And I wanted to go and prove it every time I came out." - Chuck Liddell 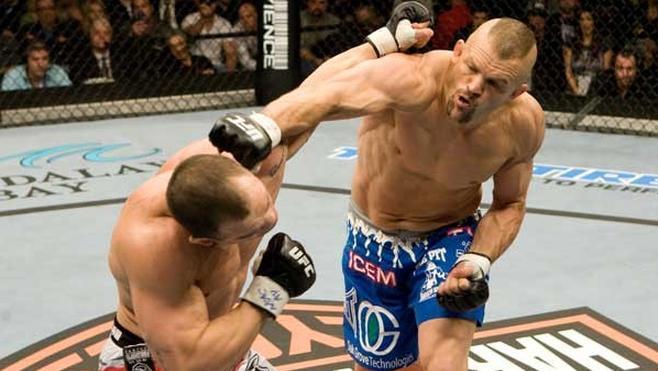 He was the face of the MMA explosion that began in 2005, the mohawked knockout artist who everyone knew simply by his nickname, “The Iceman.” But if you ask Chuck Liddell about being “that guy,” you can tell that he’s surprised by the acclaim he’s received, and still receives, more than three years after his last fight.

“It still amazes me, the respect people give me and how they treat me,” said Liddell, a UFC Hall of Famer whose importance to the organization and the sport went far beyond his significant accomplishments in competition. And while his Tyson-esque ability to end fights with one punch and intimidating look helped when it came to his appeal, he believes his connection with fans came from something a lot more basic.

“I’m just real, I’m just me,” he said. “I love to fight, I went out and fought in a style people like to watch. In interviews, I was just being me, and I think people enjoy seeing someone being real out there.”

And maybe that truly is the secret. From his first UFC bout (at UFC 17) against Noe Hernandez in 1998, through his reign of terror over the light heavyweight division from 2005 to 2007, and to his final bout against Rich Franklin in 2010, Liddell never changed. Oh, the paychecks got bigger and the spotlight got brighter, but the San Luis Obispo product never swayed from his original goal in the sport: to fight. And once he found out he could make in a career in it, well, let’s just say that beat putting his accounting degree to work.

“I loved fighting, and it was a way to keep away from getting a real job,” said Liddell, 43. “To be 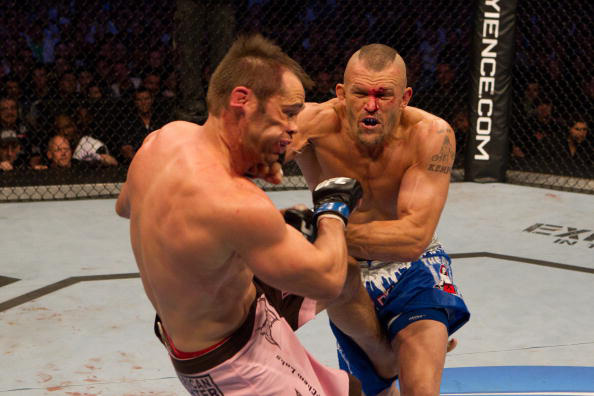 honest, when I was a kid I dreamt of having a karate gym. I wanted to be a martial artist for the rest of my life. That’s what I loved, I had been doing it since I was 12, and that seemed like the dream job to me anyway. I took accounting in college because my grandmother didn’t consider PE a real major. So I ended up doing it, and it was something that came easy to me. But I always thought of that as my fallback plan.”

It was a plan he never had to use. And as he tore through the 205-pound weight class, it was his right hand that led the way. A weapon unlike any in the sport, you could know it was coming and still not avoid it. And more often than not, if he caught you, you were done for the night.

“I threw from a lot of different angles, I threw a lot of different right hands, and I threw them hard,” he explains. “Jeremy Horn was looking for all the looping punches and he didn’t know I had a straight right. And that’s what I dropped him with. They just forget that you have a straight right, they’re expecting the other stuff, and that straight right slips right in. Or I’m throwing it over, over, over, and now I come up and through the middle. Like with Guy Mezger, I was throwing over and over and I just came up through the middle and changed it. It was a lot of precision timing, accuracy, and angles. I throw that punch hard from a lot of different directions. And you’re never sure where it’s coming from.”

Yet even if you didn’t know where it began, you knew where it ended, and during a seven fight stretch from 2004 to 2006, one of the greatest streaks in MMA history, Liddell beat Tito Ortiz (twice), Vernon White, Randy Couture (twice), Jeremy Horn, and Babalu Sobral, all by knockout. And though no fighter is invincible, he looked pretty damn close at the time. Did he feel that way? 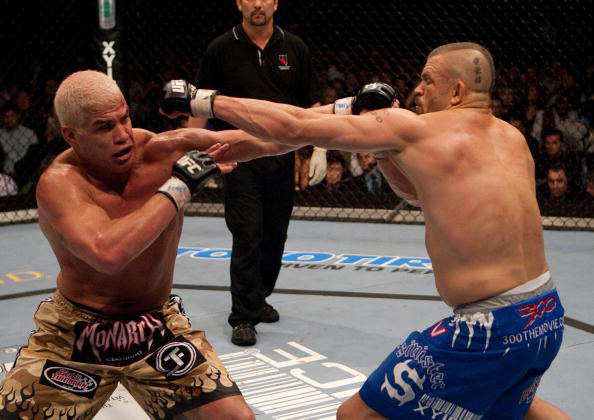 “I always felt that way and I always thought I was the best in the world and could beat anybody,” he said. “And I wanted to go and prove it every time I came out. It was a great feeling knowing that the people you were fighting respected your power and you knew they were worried about you hitting them. They can’t help it. I had a great time.”

It was a great time for the sport as well, and between Liddell’s knockout streak and his stint as a coach on the groundbreaking season one of The Ultimate Fighter, his profile grew with the sport’s.

“I got in there, I was chasing the title, and things just started moving,” he said. “I wanted to get that title, I had something to strive for, we started getting paid, and then it just kind of exploded.”

Was that a surprise?

“I was sure it would be where it’s at today,” he said. “I always thought it was a great sport, but it moved a lot faster than I thought it would. The reality show helped us blow up real fast.”

After Liddell lost his light heavyweight crown to Quinton Jackson in 2007, he went on a career-ending skid where he lost four of his last five, but there was still time for some glorious Liddell moments, the first when he beat Wanderlei Silva in a 2007 classic, and another when he switched up his usual intro song from DMX’ “Intro” to Slayer’s “Raining Blood” before his 2009 bout with Mauricio “Shogun” Rua.

“We had done the DMX one for so long, I love Slayer, and I knew I was getting to the end of my career, so I wanted to come out to Slayer at least once,” said Liddell, who did more than fight; he 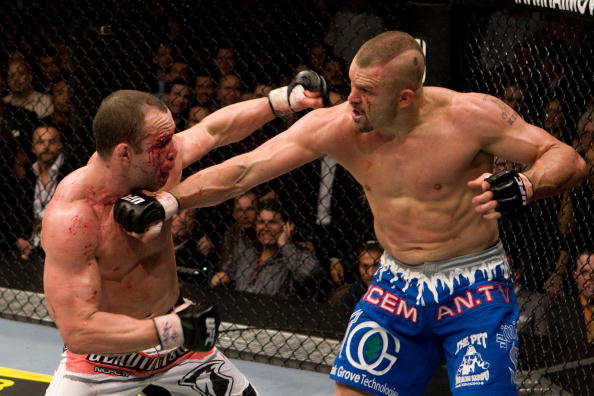 created events that you had to see, and whether he won or lost, you ended up talking about them for weeks. I won’t lie, I kind of miss seeing “The Iceman” in there, even though he called it quits at the right time. He agrees that he misses the sport too, but also that he left when he should have.

“I always want to fight,” he laughs. “I still love fighting, but the reasons I retired still stay the same, so I’m still here.”

That’s okay, because we’ll always have the memories.