Read on for the 20 greatest upsets in UFC history... 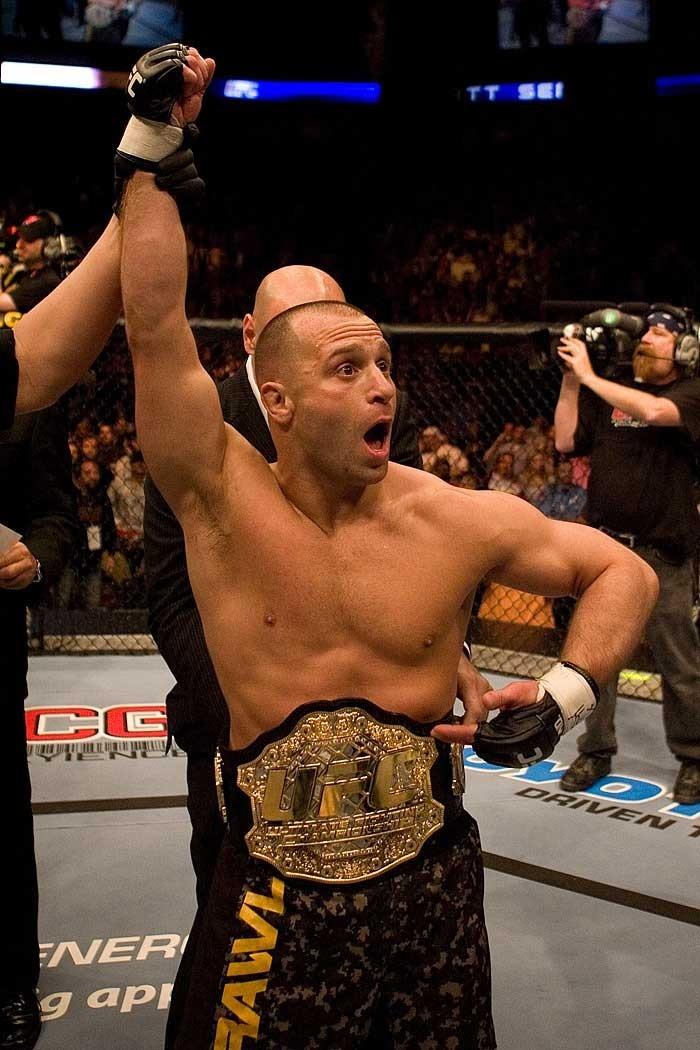 It may be the most exciting moment in combat sports, seeing the underdog upset the odds to beat a more heralded foe. And despite the diversity of fighters and situations on display below, the one thing all the winners had in common is that they didn’t care about the odds or public perception; all they cared about was winning the fight. And when the gloves are on and the Octagon door is shut, that’s all that matters.

UFC 1 - Royce Gracie-Ken Shamrock I
All you needed to do was look at Royce Gracie and Ken Shamrock side by side to wonder ‘how in the world is this skinny kid from Brazil’ going to beat this monster?’ Throw in the fact that Shamrock knew the “mysterious” submission game employed by Gracie as well, and the odds in his favor shot even higher. But on this night, Gracie was not to be denied as he put a new sport on the map with a brilliant three fight / three win performance that was epitomized by the win in the middle over Shamrock.

UFC 3 - Keith Hackney-Emmanuel Yarborough
In the early days of the UFC, it was hard to get a read on some of the competitors in this brand new fighting venue, so you usually judged fighters by their appearance. And when 200 pound Keith Hackney faced off against 600 pound Emmanuel Yarborough, you feared for Hackney’s safety. Well, at least you did until the fight started and Hackney dropped his opponent with the first strike he landed. From there, it was all Hackney as he halted Yarborough in less than two minutes.

UFC 14 – Maurice Smith-Mark Coleman
Just as jiu-jitsu ruled the early days of the Octagon, wrestling had taken over in 1996, and as 1997 dawned, the man on the top of the heap was “The Godfather of Ground and Pound,” Mark Coleman. But kickboxing star Maurice Smith was about to turn the MMA world on its ear, and at UFC 14, he stunned observers with a style that was soon to be known as “Sprawl and Brawl,” as he tossed off Coleman’s takedown attempts and pounded out a decision win that earned him the UFC heavyweight title and handed “The Hammer” his first ever loss.

UFC 15 - Randy Couture-Vitor Belfort I
As you can tell with a quick glance of this list, Randy Couture made a career out of beating the oddsmakers, and it all began with his October 1997 thrashing of then-unbeaten Vitor Belfort. At the time, the question wasn’t who would eventually beat “The Phenom,” but if he would lose at all. Couture took all of eight minutes and 17 seconds to answer both questions as he pounded 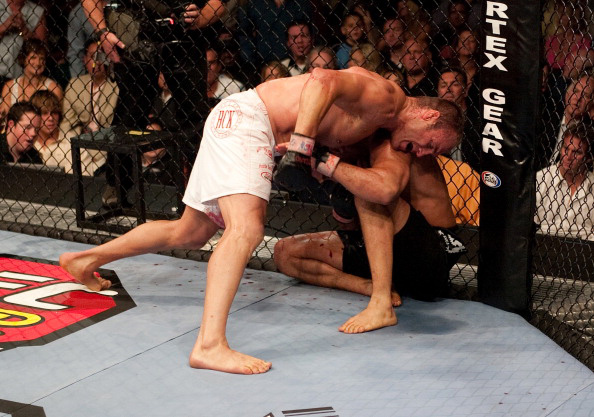 out a TKO victory.

UFC 17 – Pete Williams-Mark Coleman
Despite his loss to Maurice Smith 10 months earlier, Mark Coleman was still “The Hammer” and still a feared man in the Octagon. Originally scheduled to face fellow wrestler Randy Couture, Coleman was instead matched with young prospect Pete Williams, and the Lions Den product made an immediate name for himself with a highlight reel head kick knockout of an exhausted Coleman at the 12:38 mark of their 1998 bout.

UFC 35 - Jens Pulver-BJ Penn I
Despite his status as UFC lightweight champion and a veteran competitor of the sport, Jens Pulver was a prohibitive underdog when he took on “The Prodigy,” BJ Penn, at UFC 35 in 2002. And for two rounds, the oddsmakers were right, as Penn dominated and almost submitted the champion at the end of round two. But for the next three rounds, “Lil’ Evil” emerged, pounding out a five round majority decision that was the time capsule moment in the career of the UFC’s popular (and first) lightweight champion.

UFC 38 – Ian Freeman-Frank Mir
In 2002, Frank Mir was the UFC’s Golden Boy in waiting, a charismatic young heavyweight with off the charts talent. Ian Freeman, competing in front of his countrymen in the UFC’s first visit to England, was a grizzled veteran fighting with a heavy heart due to the illness of his father. Inspired, Freeman shocked Mir and the world with an emotional first round TKO win. But the celebration was tempered by the news that Freeman’s father had passed away shortly before the bout, with “The Machine” not being told until after the fight concluded.

UFC 43 – Randy Couture-Chuck Liddell I
After taking back-to-back losses at heavyweight to the much bigger Ricco Rodriguez and Josh Barnett, Randy Couture’s drop to the 205 pound weight class was seen as a move of desperation to save a career on the downswing. Facing the feared Chuck Liddell in his first light heavyweight bout was just going to hasten Couture’s demise. But the one person not counting Couture out was the man himself, and he not only beat Liddell, he stopped him in the third round and began the second act of one of the fight game’s most amazing careers.

UFC 46 – BJ Penn-Matt Hughes I
BJ Penn came up short in his two previous shots at UFC gold, losing to Jens Pulver and drawing with Caol Uno. What made him think that he could beat Matt Hughes, and 15 pounds north at welterweight to boot? It’s the confidence that made “The Prodigy” one of the greats, and he 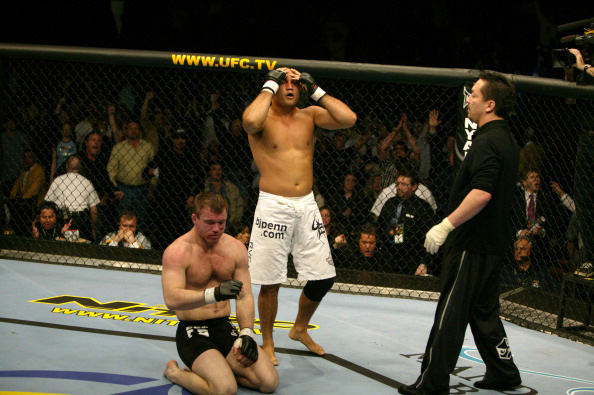 delivered a defining performance in submitting a stunned Hughes at 4:39 of the first round to win the UFC 170-pound title.

UFC 47 – Nick Diaz-Robbie Lawler
A no-nonsense knockout artist, “Ruthless” Robbie Lawler was turning into the UFC’s version of Mike Tyson and the fans loved him for it. Even an injury-induced loss to Pete Spratt didn’t quiet the buzz around Lawler, but jiu-jitsu ace Nick Diaz certainly did the trick with his stunning one punch finish of Lawler. But Diaz was no Buster Douglas, as he went on to a successful career of his own in the ensuing years.

UFC 57 – Marcio Cruz-Frank Mir
Less than two years removed from a serious motorcycle accident that took his UFC heavyweight title and almost his life, Frank Mir returned to the Octagon in February of 2006 to face jiu-jitsu specialist Marcio Cruz at UFC 57. But this wasn’t the same Mir that was on top of the world a couple years earlier, and Cruz proved it by bloodying and stopping the former champion in the first round. It wouldn’t be until 2007 that the “real” Mir once again made his presence known.

UFC 63 – Joe Lauzon-Jens Pulver
After more than four years away, Jens Pulver’s return to the UFC in 2006 was supposed to be a celebration. And it was – for opponent Joe Lauzon, who knocked “Lil’ Evil” out in less than a minute, derailing the former lightweight champion’s comeback momentarily. As for Lauzon, he was back in work on Monday morning as an IT professional.

UFC Fight Night 8 – Jake O’Brien-Heath Herring
No, it wasn’t the most compelling fight you’ll ever see, but in terms of having a gameplan, sticking to it, and executing it flawlessly, Jake O’Brien was spectacular in defusing the attack of PRIDE and K-1 star Heath Herring, who came to the Octagon with plenty of fanfare, but who instead was soundly outpointed by O’Brien, a veteran of only 10 pro fights.

UFC 68 – Randy Couture-Tim Sylvia
Sure, it was Randy Couture, but after the former heavyweight and light heavyweight champion’s year long layoff (and knockout losses in two of his previous three fights), finding someone who was picking “The Natural” to beat the 6 foot 8 Sylvia was near impossible.  But he pulled off yet another miracle in winning a shutout five round decision, delighting a packed house at the Nationwide Arena in Columbus, Ohio, in the process.

UFC 69 – Matt Serra-Georges St-Pierre I
2007 was the year of the upset, but when it came to a fighter who was given virtually no chance to take down a champion expected to reign atop his division for as long as he chose to, Matt Serra’s stoppage of Georges St-Pierre was not only the biggest upset of that year, but of All-Time. And the Renzo Gracie Jiu-Jitsu black belt did it with his fists, not his ground game, as he 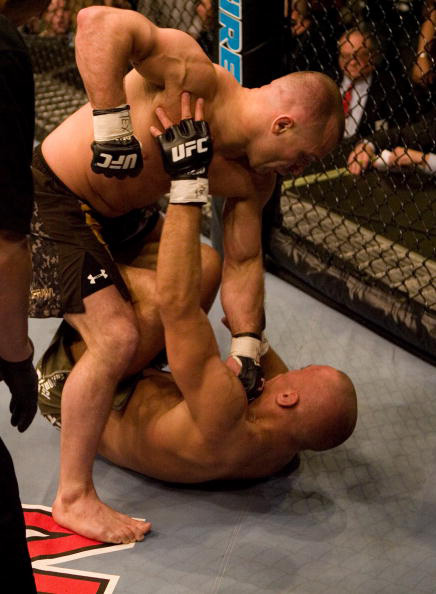 clipped GSP early and kept punching until referee John McCarthy halted the bout and raised the hand of the new welterweight champion.

UFC 70 – Gabriel Gonzaga-Mirko Cro Cop
Sure, Gabriel Gonzaga was an underdog against the feared Croatian striker, but there were more than a few people who figured the Brazilian Jiu-Jitsu Black Belt had the right stuff to beat Cro Cop – on the ground. Beating Cro Cop with a single kick to the head? Those are the kinds of odds that wouldn’t even show up in Vegas. But Gonzaga pulled it off, earning himself a shot at the heavyweight title and a permanent spot in UFC highlight reels.

UFC 71 – Houston Alexander-Keith Jardine
Practically no one knew who Houston Alexander was when he stepped into the Octagon against Keith Jardine at UFC 71 other than the fact that he was a radio DJ on the side, and a father of six. But everyone knew who he was after his 48 second blitz of the highly-regarded “Dean of Mean”, who was bludgeoned into defeat with a high-impact assault that electrified the packed house at the MGM Grand in Las Vegas.

UFC 76 – Forrest Griffin-Mauricio Rua I
No one thought Forrest Griffin was going to lie down and take a beating from high-profile PRIDE import Mauricio Rua when they met in Anaheim in 2007.  Griffin was going to show up, be competitive, swing for the fences, and eventually get put away by ‘Shogun’ – at least that’s what the Hollywood script called for.  Griffin didn’t get the memo though, and he not only beat Rua, he dominated him, putting the icing on the cake with a submission in the final minute to cap the upset victory.

UFC 95 – Paulo Thiago-Josh Koscheck
At the time of this 2009 bout, it was assumed that the unbeaten but unknown Paulo Thiago would be taken care of fairly easily by highly-regarded contender Josh Koscheck. Now the Brazilian had his supporters, but it would be safe to guess that not even Thiago’s biggest fans would have expected their man to score with a right uppercut followed by a clean-up left hand to win by first round knockout. This one stunned everyone, especially Koscheck.

UFC 112 - Frankie Edgar-BJ Penn I
Few outside of his native New Jersey gave Frankie Edgar a shot at defeating BJ Penn for the UFC lightweight title in their April 2010 bout. But with crisp striking and effective movement, as well as a couple points-scoring takedowns, Edgar stunned fans at Abu Dhabi with a unanimous decision win. And if that wasn’t enough, Edgar repeated the feat in more dominant fashion four months later at UFC 118, proving that the first win was no fluke.