The UFC 20 celebration continues with a look back at the short, but memorable, UFC career of Brock Lesnar... 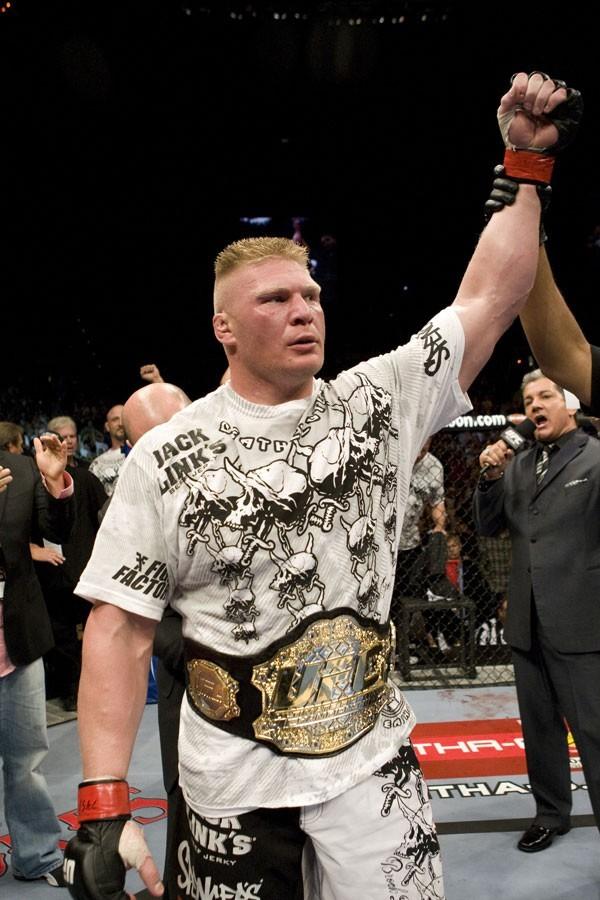 The word came down on fight day in Cincinnati, hours before UFC 77 took place: Brock Lesnar was coming to the UFC. After hearing this, there was a definite buzz around the UFC’s makeshift office in the host hotel, and while fans flooded the place for the opportunity to meet the fighters on that night’s card, Lesnar and his lawyer, Brian Stegeman, were at another hotel a few blocks away.

That’s where I went with the UFC’s head of PR at the time, Jennifer Wenk, to meet with the duo and grab some quotes for a press release and story. Now I’m bad with numbers, but I do recall reading somewhere that Lesnar was six feet tall. Well, as soon as the former and future WWE star rose from his seat to shake hands, the first thing I blurted as I continued to look skyward was “you’re not six feet tall.”

Lesnar laughed, and despite a reputation for being surly and difficult to deal with it, from that moment in the fall of 2007 until his last UFC bout in December of 2011, I never felt that way at all. Did I see him being surly and difficult to deal with at times with other folks? Yes. But in my dealings with the former heavyweight champ, he was always a pro, and always compelling. If you left an interview with Lesnar and didn’t have at least a few nuggets of gold, you needed to find a new line of work because he always knew how to sell a fight.

And when you’ve got someone who knows that tricky art of getting people to tune in, buy a Pay-Per-View, and pick up a t-shirt, that’s half the battle right there. The other half is completely up to the men (or women) in the Octagon on fight night, and despite the odds, Lesnar delivered more often or not when that bell rang.

Of course, finishing with a record of 5-3 isn’t what most fighters hope to do when their careers are all said and done, but those eight fights (seven in the UFC) don’t truly reveal the impact he had on the sport in a little over four years, or what he had to overcome to get into the Octagon in the tail end of his short career. Needless to say, he will be remembered by fans of the sport, some who booed, some who cheered, but all of whom watched him when he competed.

A 2000 NCAA Division I national wrestling champion for the University of Minnesota, South Dakota’s Lesnar went on to international stardom as a WWE wrestler before leaving that world to try out for the NFL’s Minnesota Vikings, despite a strong showing, Lesnar was cut, but he didn’t stay idle for long, opting to begin a career in mixed martial arts after a short return to pro wrestling.

“I originally wanted to fight when I was in junior college,” said Lesnar, who wrestled for Bismarck State College, in 2008.  “I took some summer school out in Lassen, California, where I met up with some guys who trained out of the Lions Den.  They booked me in a show in Reno, Nevada, and then I had to pull out because once you got paid to participate in something, the NCAA wouldn’t accept me, and I wanted to wrestle.  But I had actually started rolling and learning jiu-jitsu back in junior college when I was 19-20 years old.”

After putting in the requisite work in the gym, Lesnar was signed to make his debut against seven-foot-two Hong Man Choi at a K-1 event in Los Angeles in June, but he was instead matched up with late replacement Min Soo Kim, an Olympic silver medalist in judo.

The fight was a blowout for Lesnar, who took Kim to the mat and pounded on him, forcing a tap out due to strikes in just one minute and nine seconds.

“I was just so happy to put my fist in some other guy’s face,” said Lesnar of his pro debut.  “I felt like I was in heaven.  It did go fast, 69 seconds, and it felt like it was five seconds.”

Lesnar immediately made it known that he wanted to compete in the UFC, and a meeting with company president Dana White ensued.

“From the first conversation I had with Brock Lesnar, I was confident that he was gonna fight in the UFC,” said White.  “He had fought in another show, and after he fought in that show, he realized what it was like to fight in a rinky-dink organization.  Fighters and athletes of that caliber want to come to the UFC because this is the place to be.  It’s the most professional, it’s got the best fighters in the world and if you want to make your name and cement your legacy, the UFC is the only place to do it.”

Eventually, Lesnar convinced White that he was ready to take on the best the UFC had to offer and that he didn’t want any gimme fights. And White didn’t give him any, matching him up immediately with former heavyweight champion Frank Mir at UFC 81 in February of 2008.

After a strong start, Lesnar was submitted by Mir, but by the time he rebounded with wins over Heath Herring and Randy Couture, he was the heavyweight champion of the world, a feat he accomplished in just four pro fights.

At UFC 100 in July of 2009, he avenged the loss to Mir via second round TKO, but was struck a few months later with the first of two bouts of diverticulitis that threatened his career and his life.

He refused surgery after the first case of diverticulitis struck and he made a miraculous recovery, capping off his comeback with perhaps the biggest win of his career, a second round submission victory over Shane Carwin.

Three months after the Carwin bout, Lesnar would lose his belt to Cain Velasquez, and after a stint as a coach on season 13 of The Ultimate Fighter, he was hit a second time with diverticulitis. This time, he opted for surgery and had 12 inches of his colon removed. But once again, he rose from the proverbial canvas to beat the ailment and step back into the Octagon at UFC 141 in December of 2011.

He was just a shadow of his former fighting self that night though, as he was stopped in 2:26 of the first round by Alistair Overeem. Lesnar retired after the bout at 34 and eventually returned to pro wrestling and the WWE, but despite his short stay in MMA, it was one that won’t be forgotten by anyone who witnessed it.