"You look at my record and I’ve got a Who’s Who of people that I fought and I don’t think I would have it any other way." - Rich Franklin 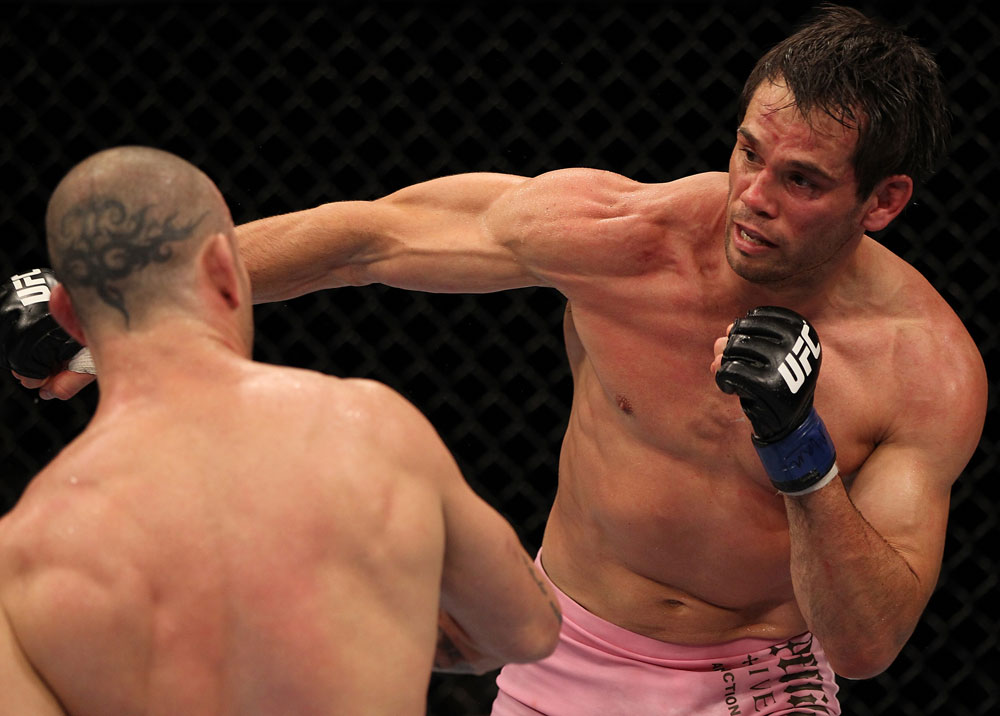 Every mixed martial arts fan remembers the night of April 9, 2005, when the Ultimate Fighter season one final between Forrest Griffin and Stephan Bonnar changed the landscape of the sport and the UFC forever. What some may have forgotten was that Griffin vs. Bonnar I wasn’t even the main event that night at the Cox Pavilion in Las Vegas.

That spot went to a battle between Ken Shamrock and a young man from Ohio named Rich “Ace” Franklin. And as he warmed up for the biggest fight of his life against the UFC Hall of Famer, Franklin heard the crowd getting louder and louder as Griffin and Bonnar put on their historic epic.

“The crowd was going nuts and there’s a two-fold feeling you get out of that,” Franklin told UFC.com last week as he prepared for the launch of his California organic juice company Ze/Lin. “Pre-fight you have those jitters and you’re nervous. If you’ve ever seen the movie Gladiator, before they’re about to walk out into the first arena, one of the guys starts peeing on himself. (Laughs) You get that feeling of ‘this is going to be me in a little bit,’ and it helps builds the nerves up. And at the same time, you’re thinking ‘crap, these people are going crazy for this fight. This is gonna be a tough act to follow.’ Which in turn plays into the nerves.”

It was a tough act to follow, but Franklin delivered on the promise that had seen him be dubbed one of the top young stars in the UFC, stopping Shamrock at 2:42 of the first round.

And that’s all it took.

“I knew that was the fight that would kind of put me in a different stratosphere within this sport,” he said. “I knew that at the time and I knew that there was a lot at stake for me. That was a make or break fight. Of course, then the popularity of the UFC exploded, along with my personal popularity within the sport, basically overnight. I had that fight, then the title fight a couple months later, and you fast forward the clocks and here I am today.”

In June of 2005, Franklin became the UFC middleweight champion after halting Evan Tanner. He went on to coach season two of The Ultimate Fighter, building his profile even higher, and it was simply a life-changing whirlwind from there for the former high school teacher from Cincinnati, one he admits was unexpected.

“I don’t think I ever thought that far ahead,” he said. “I really didn’t. Even when I was contemplating quitting teaching or after I decided I was going to walk away from the teaching profession to try and fight full-time in the UFC, part of me thought that I would leave school for a year and come back and teach again. I don’t even know if I believed that I was going to personally have a tremendous amount of success in the sport, and at least at that time, most of the fighters that were in the UFC, their careers were short lived.”

Not Franklin’s, and even though his presence was felt inside the Octagon as one of the best fighters on the planet, the world outside the MMA community got to know him as well, as he was – and is – one of the sport’s great ambassadors, often the first person reporters would speak to when the UFC would visit a new market, both Stateside and abroad.

“I embraced the role because it makes you feel needed, and there’s something to be said about that,” he said. “Not just from the fighting perspective, because for every talented fighter out there, if that fighter went away, you could always find a new face. When I disappear off the scene, it’s going to be filled with newer, younger fighters that are going to be better, exciting guys. But when you play that ambassador role, you feel needed on a different level. And there were definitely times when the UFC was really fighting for their position in the sports world, and there was a lot of negativity surrounding the sport, with people thinking it was unsafe and stuff like that. So I had an instrumental role within the organization, talking to a lot of people, and I really did enjoy that.”

Not as much as he enjoyed fighting though, and when you look up and down at the names on his record, it’s one of the most impressive lists you will find: Shamrock, Tanner, Lyoto Machida, Jorge Rivera, Nate Quarry, David Loiseau, Anderson Silva, Jason MacDonald, Yushin Okami, Travis Lutter, Matt Hamill, Dan Henderson, Wanderlei Silva, Vitor Belfort, Chuck Liddell, Griffin, Cung Le. If that’s not an MMA Murderers Row, what is?

“You look at my record and I’ve got a Who’s Who of people that I fought and I don’t think I would have it any other way,” he said. “I look at sports like boxing, and oftentimes in boxing, historically guys have had one big fight and then a couple tune-up fights, then they’ll have another big fight and a couple tune-ups. And I just don’t think that I could get excited for an opponent that I knew wasn’t going to bring my best out.”

ONE FOR THE TIME CAPSULE

With all the aforementioned heavyweights on Franklin’s pro record, when you ask him the fight he would put in a time capsule, the response isn’t one you would expect, but after he explains why he picked his 2008 win over Travis Lutter, it makes all the sense in the world.

“I believe the most important fight in my career was probably the Travis Lutter fight, even though it’s not one that people talk about very often,” said Franklin. “When I went to the fight, I had an amazing camp and my coaches did a great job of setting up the game plan. Rob Radford and I went up to Matt Hume’s camp. I had been working with Neal (Rowe) out of Seattle, he joined up with us Vegas, and we all watched film. When the three of them put their heads together, they said ‘this is gonna happen. Travis is going to come out and he’s going to do A. And in response to that, we’re going to do this. And then he’s going to do B. And in response to that, we’re going to do this.’ And so on and so forth down the line.

“So we worked these drills and I go into the fight having completely analyzed him as a fighter,” he continues. “I had all the answers that I needed, and I walked out and he did exactly what they said. But I didn’t execute properly. I failed and he was able to succeed. Everything he did, I had an answer, but I wasn’t performing at the level I should have been performing at. I was not executing in that fight until it got to the point where Travis took me down and full mounted me. It was the first time I was in a fight where I said to myself ‘I’m gonna lose this fight. And if I don’t want to lose this fight, I better get myself in gear and do what I need to do.’ So I really had to flip a switch in my mind and had to overcome some adversity in that fight.

“Everybody talks about my Nate Quarry fight,” Franklin concludes. “I was winning that fight from the first bell to the end of the fight. Fights like that don’t really tell what you’re really, really made of. And that’s why for me, personally, the Travis Lutter fight was one of the most important. He put it on me that fight and I had to come from behind to really make sure that I wanted the victory.”