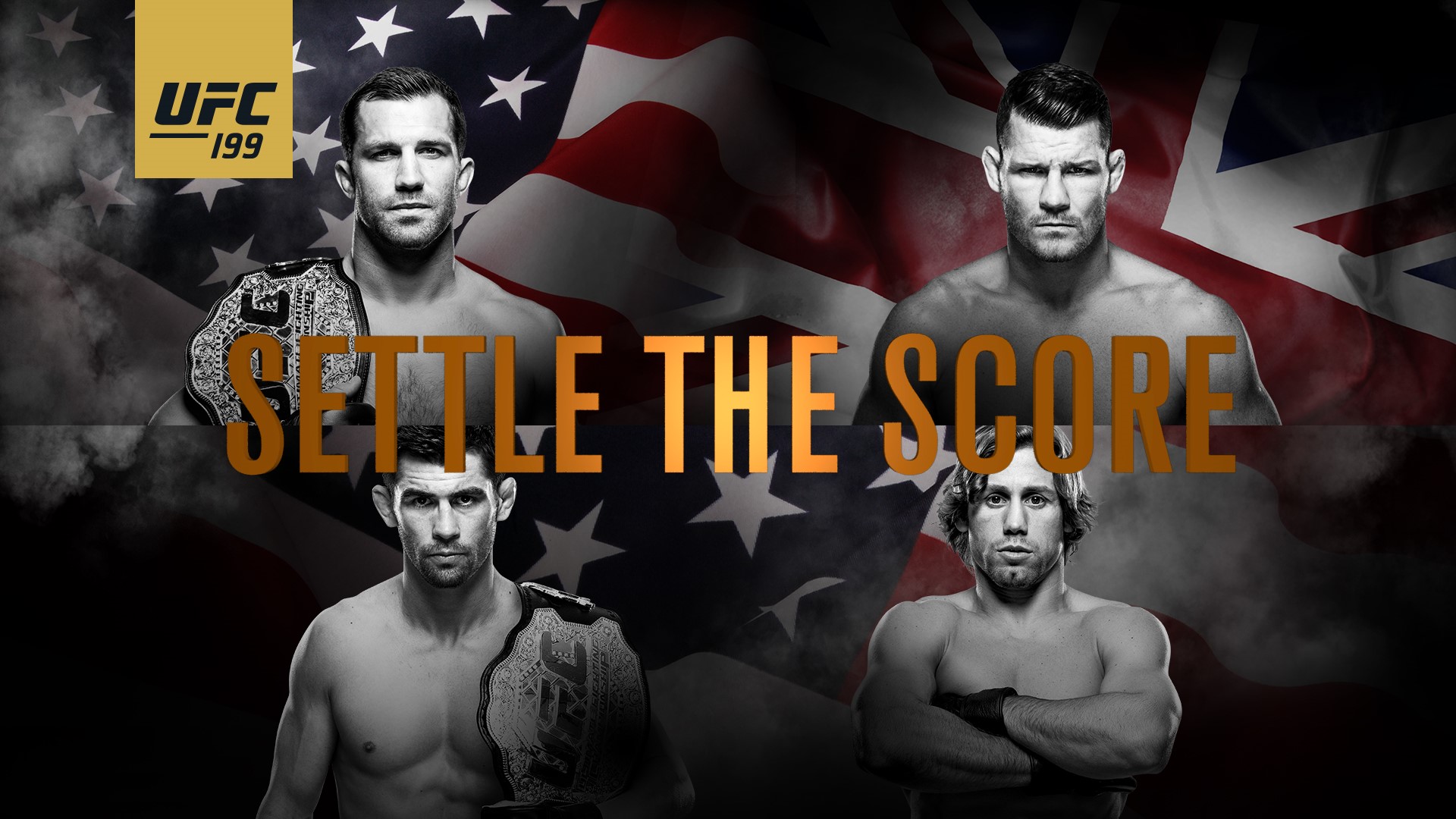 What do you get when you put two pairs of bitter rivals who have a proven ability and obvious enjoyment in taking verbal jabs at their adversary on the same conference call together?

At least that was the case with Thursday’s UFC 199 media conference call, which was non-stop banter from start to finish as champions Luke Rockhold and Dominick Cruz went toe-to-toe with the men they’ll defend their titles against, Michael Bisping and Urijah Faber, with vicious rhetoric in advance of their respective championship showdowns next weekend at The Forum in Inglewood, California.

“It’s joy. I can’t wait and I’m sure he feels the same way,” Faber said of getting to share the cage with Cruz for a third time to finally settle their rivalry that began nearly a decade ago in the WEC.”We’ve been wanting to punch each other in the face for a long time and we’re going to get that opportunity.

“I want to take out the best Dominick Cruz. I know the mind is there and the technique is there and I’ll be looking to take that head off.”

“First time I met him, I met him through a guy that is in the UFC still, Eddie Wineland, and it was all the way back in 2007,” Cruz began, asked to recall the first time he had negative thoughts about his nemesis. “He had a smug arrogance about him right from the start and I just didn’t like him. He probably felt the same about me and it just never really stopped from there.”

Not only does the rivalry between the two former WEC standouts trace back nearly a decade, but next weekend’s bantamweight title fight is nearly five years in the making, as Cruz and Faber were supposed to square off for a third time after serving as opposing coaches on Season 15 of The Ultimate Fighter before Cruz’s career was derailed by injuries.

Now that “The Dominator” is back on top of the division and with “The California Kid” having won three straight in the 135-pound ranks, the timing was right to square them off again and let them settle things once and for all.

While Cruz and Faber just traded words about the past and comments made in the build up to this fight, Rockhold and Bisping were happy to look to the future and forecast how things are going to play out next weekend when they close out the show at The Forum.

Like their bantamweight colleagues, next Saturday’s middleweight title combatants have a history together, as Rockhold earned a second-round submission win over the tenured British standout in Sydney, Australia during his march to the top of the division. There was a contentious build to that encounter and even though “The Count” is subbing in for Chris Weidman on short notice, it’s no less heated this time around.

“Mike is a tough dude – he’s got balls; he took this fight – but this will not be his fairy tale,” the middleweight champion offered. “This will be his swan song. This will be the end of him. I’m going to go out there and I’m going to dominate this guy like he’s never been (dominated) before.

“You earned this,” Rockhold continued, giving Bisping his due for beating Anderson Silva in February and putting himself in a position to challenge for the title. “You would have probably won that fight handily if you didn’t complain about your mouthpiece and get clipped, but you will not be a champion. I will humiliate you next week. Mark my words: humiliation.”

“You hold a victory over me and I want to rectify that,” Bisping said, offering a response to Rockhold’s assessment of how things will go. “I have to win this belt, I have to beat you. You’re very, very confident that you’re going to humiliate me, but listen: do not underestimate me, my friend.”

As UFC Vice President of Public Relations – and host of Thursday’s call – Dave Sholler put it, this was the Rockhold & Bisping Podcast and it was an instant classic, with both men wanting to make their cases clear and Bisping refusing to let anyone else get the last word in.

“It’s going to be a bad night for you, my friend,” Rockhold injected in the midst of one of the back-and-forth exchanges between the middleweight combatants that broke out over the course of the 40-minute call.

“Cool. Cool. We’ll see about that,” Bisping replied. “When you’re on the floor and you’re looking up at the stars thinking, ‘S***, I just lost my belt to a guy that came in on two weeks’ notice’ and took your belt that you worked so hard for, how’s that going to feel? I’m going to whoop your ass; that’s what’s going to happen.”