Jon Jones returned from a nearly 16-month absence from the sport Saturday night, as he shut down Ovince Saint Preux over five rounds to win the interim light heavyweight title in the main event of UFC 197.

The long layoff definitely didn't help Jones, as he returned to action successfully but looked rusty and hesitant to pull the trigger in many of the exchanges with Saint Preux.

To his credit, Saint Preux stayed tough even in the worst moments of the fight and he stuck around for 25 minutes, even though he lost a lopsided decision in the end.

For obvious reasons, Jones was an overwhelming favorite, with 90 percent of fantasy players picking the former light heavyweight champion to win in his return to the Octagon. Where almost everyone was surprised was Saint Preux taking Jones the distance after accepting the fight on only three weeks’ notice.

Seventy percent of players picked Jones to finish by knockout, so the few who did manage to select him to win by decision certainly got a leg up on the competition.

The co-main event featured another overwhelming favorite, with Demetrious Johnson picked by 83 percent of fantasy players to defeat Henry Cejudo on Saturday. Johnson was selected by 64 percent of players to win the fight by decision, but "Mighty Mouse" got the job done with an emphatic first round knockout instead. 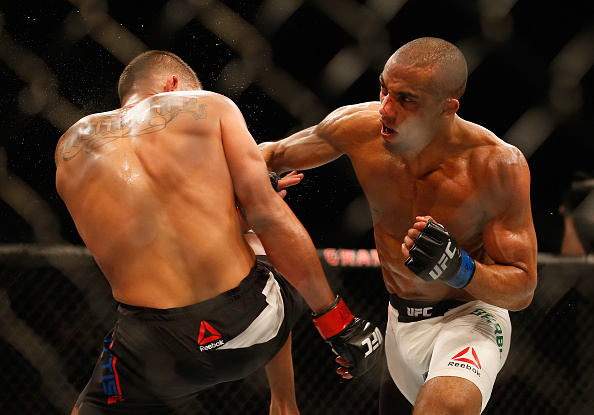 In one of the biggest upsets of the night, Edson Barboza took out former lightweight champion Anthony Pettis by unanimous decision to pick up a marquee win to add to his already impressive resume. Only 26 percent of fantasy players picked Barboza to win, while 74 percent selected Pettis.

For the players who picked Barboza, his victory signified a major shift in the fantasy game for UFC 197, as a lot of favorites came through during the course of the night.

The other two fights on the main card for UFC 197 both ended with the favorites coming out on top, with Robert Whittaker selected by a whopping 82 percent of players to take out Rafael Natal, while Yair Rodriguez was picked by 63 percent of players in his fight with Andre Fili.

In the prelims the favorites ruled the day, with Sergio Pettis coming out on top in his fight with Chris Kelades after 89 percent of players picked him to win. The same could be said for Danny Roberts and Carla Esparza, who were both solid favorites to win on Saturday night by most fantasy players.

The closest fight of the night came down to Walt Harris and Cody East, who met in a featured heavyweight bout on the prelims. East had a lot of hype around him after appearing on Dana White's "Lookin’ for a Fight" reality show, but savvy fantasy players still went with Harris 54 percent to 46 percent overall.

Harris got the job done with a TKO victory, and 68 percent of players believed he would get the job done by knockout, so that was another big win on the night.

The biggest upset on the prelims came courtesy of Marcos Rogerio de Lima, who was actually the betting favorite according to the oddsmakers. But only 36 percent of players picked him to defeat Clint Hester. The Brazilian got the job done with an arm triangle choke finish to put Harris away, benefitting the wise players who picked him to win at UFC 197.