While the headliners of UFC 196 thrilled the fans packing the Jabbawockeez Theater at MGM Grand on Wednesday afternoon, there were plenty of interested observers who have a lot more invested in the fortunes of Conor McGregor, Nate Diaz, Holly Holm and Miesha Tate.

So how do the coaches, managers and teammates see UFC 196? Let’s find out.

Bantamweight contender Bryan Caraway isn’t your typical coach. He’s also the longtime boyfriend of women’s bantamweight title challenger Miesha Tate, so he’s got a unique view of how his lady is dealing with her second UFC title fight.

The first time around, Tate was involved in a bad blood battle with Ronda Rousey back in 2013. A little more than two years later, it’s a full 180 with current champion Holly Holm.

“Everything about this is better,” Caraway said. “It goes back to competing and enjoying the sport. We got away from that and got our sights on beating just one person (Rousey), and that negativity took away from the sport. And this camp, she's being herself and having fun, training hard and is actually looking forward to a great fight. We love Holly Holm, she's an awesome opponent, she's very tough, and Miesha's definitely up to the challenge. I think the biggest thing coming up to this fight is just being able to enjoy the sport again.”

What would make this second championship fight even better for Tate would be walking out of the Octagon on Saturday night with a world title belt. But the most excited person in the MGM Grand Garden Arena may just be Mr. Caraway.

“To see Miesha win the UFC world title would be absolutely huge for me,” he said. “We've been together for almost ten years, and not just as a boyfriend, but as a coach. I've been her main coach her entire career. So seeing something we've put our whole heart into come to fruition at the pinnacle of the sport, is absolutely the best. This whole training camp has been surreal, this week has been amazing, and I just can't wait. I've had such a good feeling about this fight. I know Holly's an extremely tough opponent, but I like the style matchup and I can't wait until Saturday night and they announce 'And new...'” 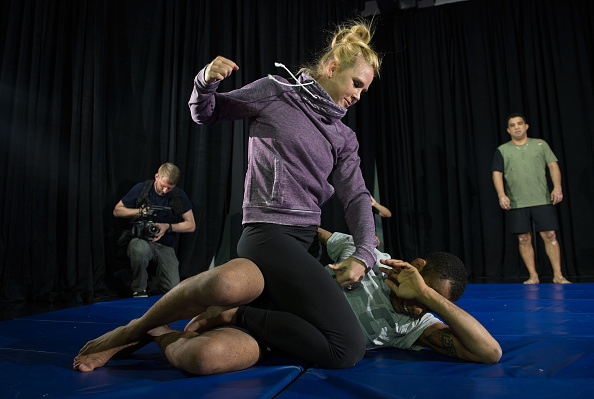 Lenny Fresquez always believed. The manager of UFC women’s bantamweight champion Holly Holm was there throughout her boxing career and is now right by the side of “The Preacher’s Daughter” as she takes over the world of mixed martial arts. He’s seen the ups and downs that a combat sports career can take, and now that the team is on a clear “up,” he’s happy to see his fighter is finally getting her just due.

“It's amazing that people are finally seeing what I've been trying to tell them for many, many years,” he said. “It's really nice to see her riding this wave and I'm very joyous to be on the ride with her. We're having a great time, Holly's having a great time, and we're just making the best of it. It's a lot of hard work and it paid off.”

While unbeaten in MMA, Holm’s decision to leave boxing, where she was a multi-division world champion and the queen of the pound-for-pound list, was risky, especially with a potential superfight against Cecilia Braekhus being negotiated. But Holm’s heart had gone from boxing to MMA, and when it was time to make a stand, she made it.

“We were negotiating with Sauerland (Promotions) for Cecilia Braekhus and they offered us a really good payday. We were the mandatory for two years and I let them know that Holly wants to fight. I also told them the way she feels and that she's going to walk away from this sport. They said ‘She won't do that for this kind of money.’ But we weren't going to play second fiddle to nobody.”

It was clearly the right decision, and if Fresquez needed any more convincing, he got it when Holm landed the head kick heard ‘round the MMA world on Ronda Rousey last November.

“It was a moment I'll never forget,” he said. “I don't even know how describe it, it was so joyous. There was that moment, and the other really great moment was when we were at the parade and she had 20,000 people show up for her. It was so touching to see the people crying. It's a big thing and it couldn't happen to a better person.” 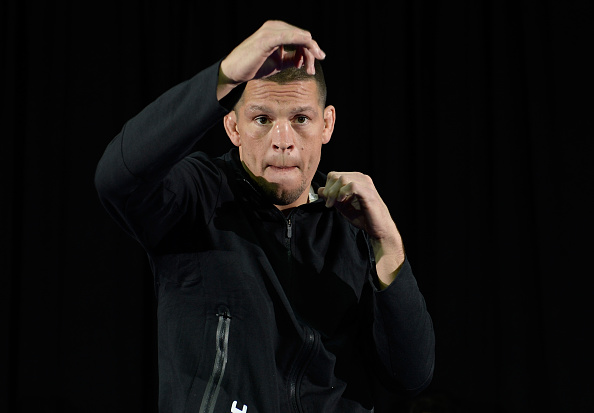 When talking to two of Nate Diaz’ teammates, Gilbert Melendez and Yancy Medeiros, two things were made clear. Neither were surprised that Diaz took the short notice fight with Conor McGregor, and that to them, Diaz isn’t just a teammate, but a brother.

Melendez, a former Strikeforce champion and current UFC standout, concurs, noting how happy he is to see Diaz in the main event spotlight.

“I consider us teammates and brothers, and we watch out for each other,” Melendez said. “Maybe I've helped him out, but he's helped me out just as much, and it's great to see him in this, on the big stage, getting what he deserves as an athlete, financially. Watching him work as a businessman was great, and the only negative is him not having a full camp to prepare for it to do himself proper justice. But he's a gamer, and if there's anyone that can wake up the next day and run seven miles after they get a phone call that they might have a fight, it's that guy. And he can follow that with a mile swim and a 30-mile bike ride. So there's no question that he'll be able to last out there, and he'll be good.”

“It was no surprise,” Medeiros said of Diaz’ willingness to step up and face “The Notorious” one. “He's always ready, he stays ready, and he's a martial artist in and out of the gym, 24/7. He wouldn't have taken this fight if he didn't feel he'd beat Conor.”

One key talking point is McGregor fighting Diaz at 170 pounds, where the Stockton standout has competed before. Melendez has been in the gym with a welterweight Nate Diaz, and as “El Nino” explains, it’s not one of his more enjoyable moments.

“Personally training with Nate, there's the Nate who is within making 155 pounds, and there's the Nate in the offseason, that's not within 155 pounds,” he said. “There's a definite difference between them. And him as a bigger guy is almost unmanageable for me as a professional fighter, especially when it comes to the striking department. All of a sudden, he's way more durable, and I'm not hurting him, and his hands are heavier. So I think it (fighting at 170) is a great thing, and I think he'll still be in good shape, so he's not going to be completely huge, but he's going to be at a good weight and it should be an advantage for him.” 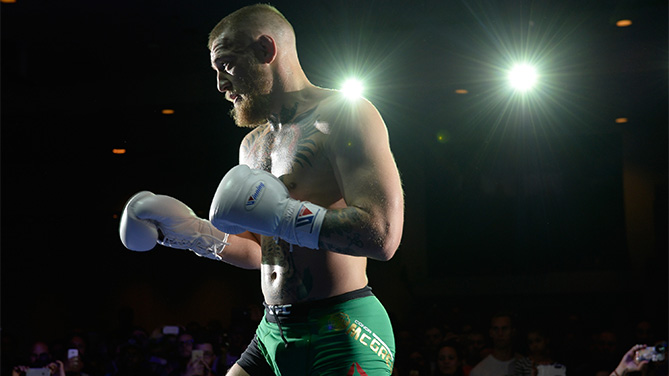 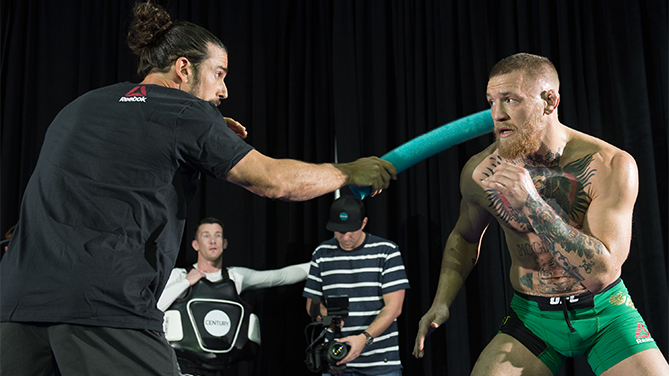 Poor Artem Lobov. As Conor McGregor’s main training partner for years, fight week used to be his chance to catch his breath. This time around, with McGregor jumping up two weight classes to the welterweight division, there have been no breaks for “The Russian Hammer.”

“He's been a completely different guy this time,” Lobov said. “Normally I look forward to his weight cut because it is the time when I hope that he will slow down a little bit and not hit me as hard and not go as hard, and his energy level will be low. (Laughs) And it just hasn't happened this time. He just grew stronger and stronger as the days went on, and I'm just happy we're finally here and I don't have to endure none of that raw power no more.”

If the UFC lightweight is clear on one thing, it’s raw power. Lobov is also well versed in the idea of fearlessness and putting little thought into the risks involved with his job. McGregor is clearly cut from the same cloth.

“One hundred percent,” Lobov said. “He is just a fighter. He is a true martial artist, and martial arts isn't about weight classes. If anything, it's about a smaller guy being able to beat the larger opponent. This is how martial arts was invented. So his attitude is f**k the weight classes, forget all that. Just get in there and fight. Do what you're trained to do.”