Andrei Arlovski isn’t the most jovial person on fight week.

Buried by an avalanche of questions at UFC 195’s Ultimate Media Day on Thursday, Arlovski was direct with his answers. Then out of nowhere, “The Pit Bull” cracked a smile.

Asked about his tenure and the loyal following he has among hardcore fans watching the sport for over a decade, he lit up a bit.

That’s the only word he needed to describe the mutually respectful kinship between this veteran fighter and his fans, a relationship that began when Arlovski started fighting 17 years ago.

UFC 195 feels like a card made specifically for resolute fans. Robbie Lawler vs. Carlos Condit is a classic throwback fight -- two warriors who are preparing for war with every intention of leaving everything they have inside the Octagon in pursuit of the welterweight title.

“I think I am a throwback fighter who was in this sport before it was big,” Lawler said. “It’s just nice to be around now and see how it’s grown, and what it’s evolved into.”

Lawler is one of the most must-see fighters in the UFC. His first title defense back at UFC 189 stole the show and earned Fight of the Year honors from virtually everybody who was declaring such a thing.

In Condit, Lawler gets an opponent who mirrors his own work ethic and aggressive fighting style – a dance partner much like Rory MacDonald, who should challenge the champion and help him put on a show for all the fans that have been following Lawler’s career since he began in 2001. 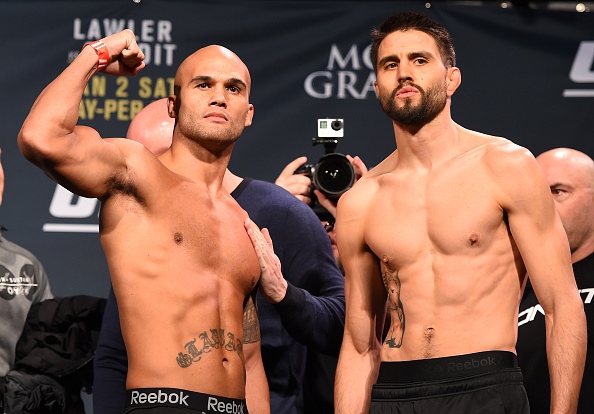 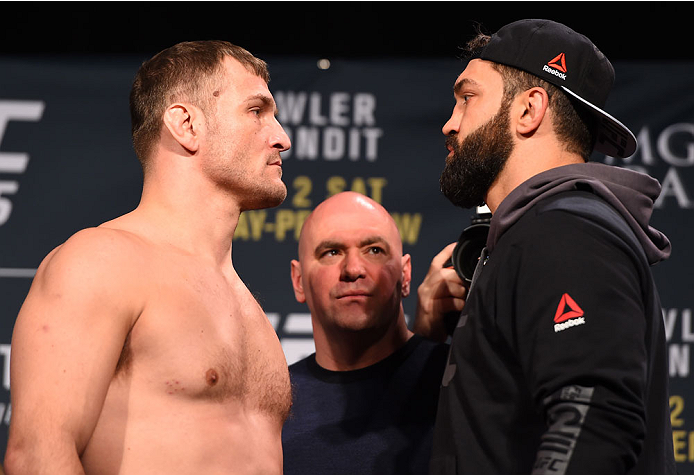 Stipe Miocic and Andrei Arlovski of Belarus face off during the UFC 195 weigh-in at the MGM Grand Conference Center on January 1, 2016 in Las Vegas, Nevada. (Photo by Josh Hedges)" align="center" />
Condit said he feels blessed to have started in the sport when he did (2002), allowing him to be a part of its progression.

“I get to train with the best athletes in the world, fight with guys from all over the world on a daily basis, and then go fight some savage on Pay-Per-View and not get arrested for it,” Condit said.

No. 3-ranked heavyweight Stipe Miocic is set to face Arlovski in the co-main event Saturday, a bout that could determine the next title contender.

Miocic, who began his professional MMA career back in 2010, is part of the new school of MMA. He was a fan back in the day, watching Arlovski compete even before he turned professional.

“(Andrei’s) been amazing. I mean, former champ, come on,” Miocic said. “He’s fought tough guys all around the world; he’s making a resurgence now with six wins in a row – he’s doing great.”

Both Lawler and Arlovski have found a way to resurrect their careers after running into their own separate road blocks on the way to the top.

Arlovski left the UFC knowing that he’d return someday to make one last run at the UFC title he held in 2006.

Lawler said he wasn’t ready for the big stage – physically or mentally – in his first UFC run. But the results tell the story since he made his return: seven wins on his way to capturing the welterweight championship.

The key to making it in MMA is finding a way to evolve as a fighter, Lawler said. He’s seen how the sport has changed over the years, and the fighters that have changed with the times have been able to stay in the mix.

“I’ve been in this sport a long time and it was one of those things where you went from guys who just knew how to wrestle and they didn’t know how to strike or grapple. Then to see my training partners when I started – they were well rounded in all aspects. And that was how the sport was evolving in that short period of time,” Lawler said.

“It’s going to continue to grow and get better. These young fighters are starting in every sport and mixing in everything and everyone is adding on to what’s already there.”

Lawler plans to continue leading the way, not only at 170 pounds, but as one of the best MMA fighters on the planet.

But Lawler doesn’t really care about his legacy or where he’s ranked on the pound-for-pound list.

He’s an old school fighter, after all. The years have made a once-brash young firecracker into one of the most humble fighters in the sport.

“It’s just an honor to still be relevant and doing my thing,” Lawler said.