UFC 194 Inside The Irish Invasion blog: Long Live The King

Despite another heavy night on the amber nectar on Friday night, the Irish faithful were packed into the Las Vegas Fight Store in Planet Hollywood making some last minute purchases.

“We haven’t seen the place like this since Mayweather versus Pacquiao,” store owner Scott Stern tells me. The fact that McGregor and Aldo have generated the same amount of traffic in the infamous apparel emporium as ‘The Fight of the Century” is quite telling in terms of the scale of UFC 194.

Gunnar Nelson’s bout with Demian Maia gave the masses their first vocal real test after they packed into the MGM. While the Irish got behind a man they consider one of their own, the Brazilians growled back with their signature chant of “Uh vai morrer” (you’re going to die). After Lobov’s defeat at the hands of Ryan Hall night before, Gunni’s concise loss at the hands of the Brazilian jiu-jitsu icon bolstered a sinking feeling in the Irish ranks.

On the other hand, the Brazilian fighters were having a very successful night. The roars of the samba people were full of optimism and hope as Leonardo Santos, Warlley Alves and then Maia tagged on big wins early. Even though “Jacare” Souza brought them back down to earth with a loss, there was still a definite confidence about the travelers from the South American country.

Like UFC 189 before it, the entrances of the main event pairing were undeniably spectacular.

Four banners fell from the four corners of the MGM Grand Garden Arena, which fell pitch black. As the opening bars of ‘The Foggy Dew” blasted around the arena, the four long canvases lit up with images from McGregor’s road to the title. Phones emanating light dotted through the darkened stands in anticipation of the self-proclaimed “Irish King.”

Eventually, ‘The Notorious” appeared on the screens around the arena and as he flashed his usual, maniacal grin, the Irish war cry filled the hallowed halls of the iconic venue.

Following Aldo’s entrance, the reigning champion stood formidably under one of the two spotlights that produced the only noted light in the MGM. The Nova Uniao product was determination personified, staring at the ground, as McGregor launched himself into various poses as he awaited the collision.

The act took all of 13 seconds. After the yearlong build-up, Aldo threw himself into the initial exchange and as he looked to land a left hand, McGregor slid out of the way and delivered his lethal dose. A left hand sent the lifeless reigning champion to the ground, and two more hammer-fists sealed the deal. 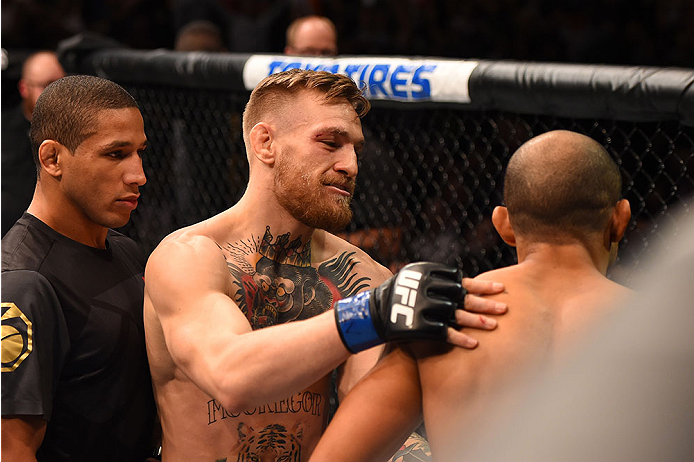 Beer flew through the air, grown men embraced and wept as McGregor scaled the cage and celebrated the unbelievable unification victory. In the front row, Irish fans danced with the ushers in the venue who couldn’t help get involved in the act.

The same sea of green, white and gold flowed through the MGM singing their songs of glory. Outside the box office entrance, another swarm of frenzied supporters bounced, laughed and bellowed out songs as confused security guards tried to think of a way to getting them to move away from the venue.

In one of the more spectacular celebrations among the Irish contingent, one man managed to scale the Octagon in the entrance of the resort to replace the cowboy hat on top of the MGM lion. Raising his tricolor aloft to the amusement of the hundreds of fans who were making their way towards the doors, he might have lasted three seconds on his pedestal before three security guards joined him in the mock fence enclosure.

McGregor emerged in front of the media and fielded in his own questions, the captain of his own ship indeed. Declaring his intentions to move up to lightweight, Dana White had sent the message through that the Dubliner will face the winner of next weekend’s lightweight title bout between Rafael Dos Anjos and Donald Cerrone.

Without a doubt, the Irish Invasion will be back again to support their hero as he journeys to become a reigning UFC champion for the second time.