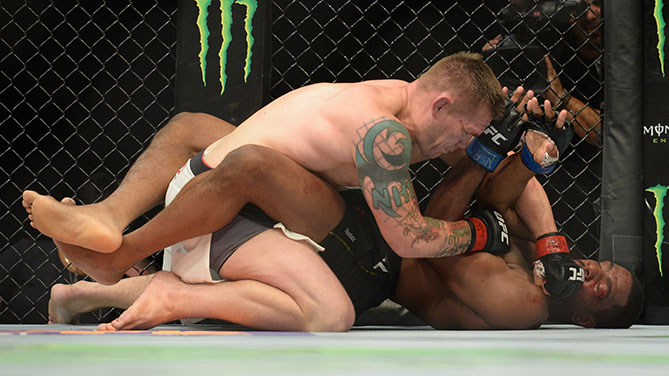 An inadvertent foul by Ron Stallings brought a premature end to his back-and-forth middleweight bout against Joe Riggs in UFC 191 early prelim action Saturday, with the illegal kick rendering Riggs unable to continue and disqualifying Stallings at the MGM Grand Garden Arena in Las Vegas.

Stallings had a solid first round thanks to a stiff southpaw jab that opened a cut around Riggs’ right eye and had the veteran bothered throughout the opening five minutes. Even two takedowns by Riggs didn’t allow the Arizonan to take control, as Stallings smoothly got himself out of trouble.

In the second though, Riggs got back in the game, dropping Stallings with a hard left. “Diesel” proceeded to deliver some thudding ground strikes, but after cutting Stallings, Riggs took a kick to the head when he was down and referee Jason Herzog intervened to give Riggs time to recover. When meeting with the Octagon-side physician, Riggs said that he couldn’t see, and the bout was halted, Herzog disqualifying Stallings at the 2:28 mark. 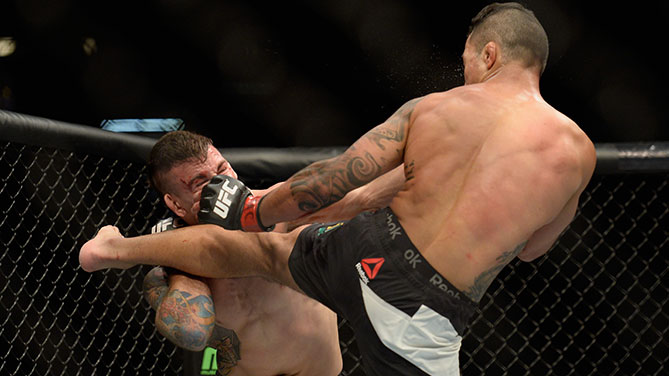 Despite going back to his corner with two cuts, one on the side of his head and the other over his eye, Malegarie had the better of the action in the opening round, as he repeatedly tagged Silva with left hooks. None of the shots appeared to stun Silva though, and the sporadic blows he scored with were the heavier ones.

Malegarie got an early takedown in Round 2, and though he didn’t do much with it, he continued scoring well once the two were back on the feet. Silva had the same success as he walked down his foe, leaving it to the final five minutes to determine the outcome of the bout.

In the last round, the two continued to battle on fairly even terms, Malegarie’s busier attack and a takedown serving him well. But it was Silva’s harder shots and aggression ultimately turning the judges’ scores in his favor.