Take a closer look at UFC 190 in this edition of By The Numbers. 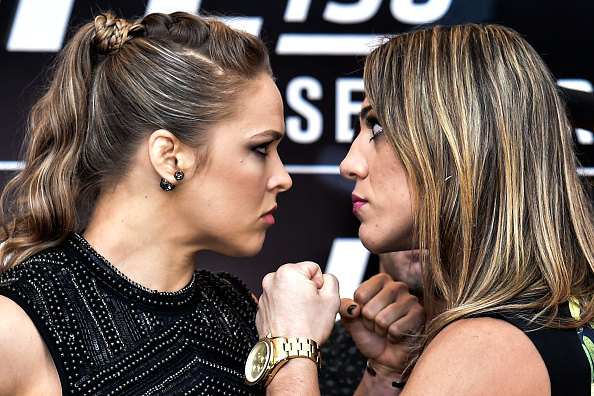 14
Seconds it took for the “Rowdy” one to secure an armbar finish of Cat Zingano at UFC 184, fastest finish in UFC title fight history

16
Seconds it took for Rousey to score a KO/TKO finish of Alexis Davis at UFC 175, tied with Frank Shamrock at UFC 15.5 for 3rd fastest finish in UFC title fight history

11
Career wins/finishes and 0 losses by Rousey

10
Of those finishes occurred in the first round

9
Of those finishes by Rousey were via armbar

2008
Year that Rowdy won a bronze medal in judo representing the US Olympic team, first woman is US history to win an Olympic medal in judo

70-37
Significant strikes landed to absorbed by Rua against Nogueira in their first meeting, which Shogun won by unanimous decision

6
KO/TKOs by Shogun in the UFC, tied for 2nd most in UFC’s light-heavyweight division behind Chuck Liddell’s 9

9
KO/TKOs by Rua in PRIDE

9
Knockdowns by Rua inside the Octagon, 3rd most knockdowns in UFC light-heavyweight history

875
Significant strikes landed by Shogun in UFC/PRIDE, 3rd most in the combined history behind former UFC light-heavyweight champions Jon Jones’ 916 and Quinton Jackson’s 1,048

42
Percentage of Nogueira’s last 12 fights he has won via KO/TKO, starting with Nog’s first KO/TKO 12 fights ago against Alistair Overeem at PRIDE Critical Countdown Absolute

155
Pounds that Glacio Franca and Fernando Bruno will be competing at to decide The Ultimate Fighter: Brazil 4’s lightweight winner

135
Pounds that Dileno Lopes and Reginaldo Vieira will be competing at to decide The Ultimate Fighter: Brazil 4’s bantamweight winner