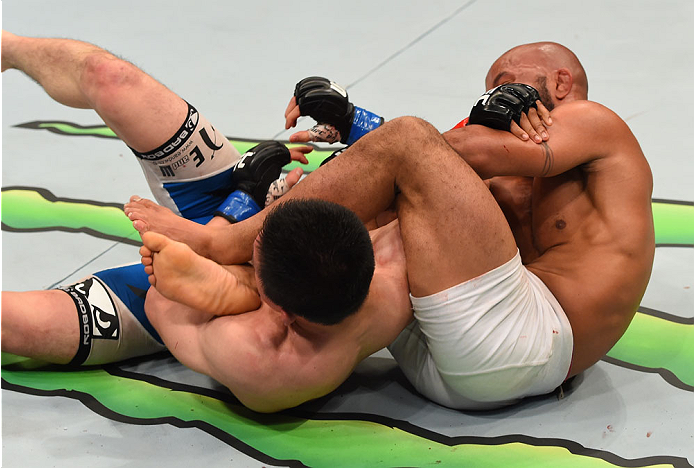 One big man, one small man.

For all the talk about Quinton “Rampage” Jackson’s return to the UFC Octagon, it was Demetrious “Mighty Mouse” Johnson who stood tall in Montreal – overpowering and spectacular from start to finish.

There was plenty to like about UFC 186 on Saturday night at Bell Centre – Rampage’s comeback plus several young Montreal fighters who earned rousing cheers from the hometown crowd – but Johnson’s epic performance belongs at the top of today’s Talking Points.

1. Mighty Mouse upstaged everyone. He earned the latest stoppage in UFC history when he spun from top position and a barrage of punches to place an armbar on Horiguchi, the No. 7-ranked flyweight, at the 4-minute, 59-second mark of the fifth round.

Until that point, Johnson (21-2-1) was almost perfect in his execution. He finished with 14 takedowns and had a 66-31 edge in significant strikes to defend his 125-pound title for the sixth time.

It’s difficult not to dispute the analysis of UFC announcer Joe Rogan, who said, “That’s the best fighter on the planet Earth right there.”

2. Rampage Jackson said he trained harder for his comeback fight than for any in his 15-year career. But he also conceded he was burdened by the stress of legal wrangling that nearly prevented him from appearing.

“I feel like I won just being here,” he said, and there was truth in that.

In the Octagon, he had the perfect opponent. Fabio Maldonado is a puncher, not a wrestler, and gave every indication he was willing to trade strikes in their co-main event, which was fought at a catch weight of 215 pounds.

Maldonado just didn’t throw enough. That was fine with Rampage, who showed a mix of body punches and kicks that he hadn’t previously displayed and essentially dictated the pace. He got off first and was more active from beginning to end, leading to a unanimous decision.

Rampage hadn’t fought in the UFC since January 2013, but he showed he is already a contender in the light heavyweight division.

3. It took three attempts, but Alexis Davis finally got the victory that has eluded her twice previously. Not surprisingly, she needed a second-round comeback to submit Sarah Kaufman.

After losing to Kaufman by TKO in 2007 and dropping a majority decision in 2012 in a bout considered one of the best women’s fights ever, Davis had to scramble Saturday. Kaufman pretty much dominated most of the first two rounds before Davis put herself in position for a clinching armbar.

It would have helped if the referee had seen Kaufman’s tapout sooner, but he moved to the wrong side of the fights, an error correctly noted by Rogan.

Despite the win, it’s still hard not to think of Davis as the bantamweight who lost to champion Ronda Rousey in 16 seconds at UFC 175.

4. These Montreal fighters bear watching in the future:

Lightweight Olivier Aubin-Mercier, who is 7-1 and scored the seventh submission win of his career with a rear naked choke of David Michaud in the third round.

Lightweight Chad “The Disciple” Laprise, who extended his record to 10-0 with an entertaining unanimous-decision victory over Bryan Barberena.