Take a closer look at UFC 186 in this edition of By The Numbers. 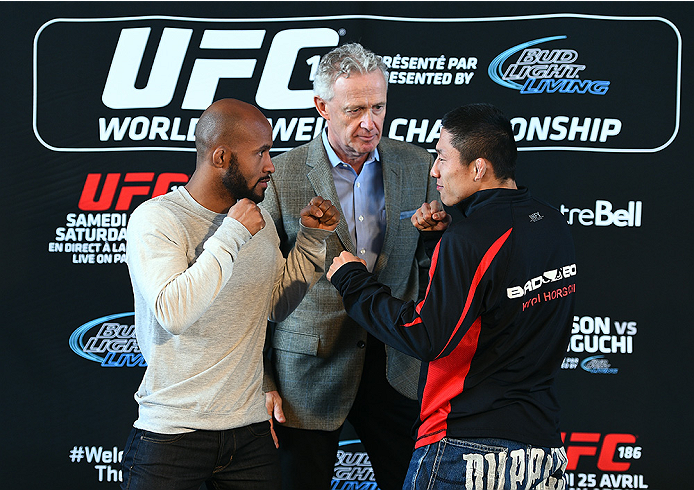 5
Consecutive UFC flyweight title defenses by Johnson including Mighty Mouse’s most recent second round submission finish of Chris Cariaso at UFC 179, tied for 5th with Ronda Rousey, Matt Hughes and Tito Ortiz for the most consecutive title defense in UFC history

2:18:20
Octagon time by Johnson as a UFC flyweight

275
Of those sig. strikes were delivered in the clinch, most in UFC history

25
Takedowns by Johnson, most in UFC flyweight history

12
Takedowns by Mighty Mouse against John Moraga at UFC on FOX: Johnson vs. Moraga, the most takedowns landed in a bout in UFC history without a failed attempt

7
Current ranking of Kyoji Horiguchi as a UFC flyweight

5
Career wins by Horiguchi occurred in the first round including his TKO of Jon Delos Reyes at UFC Fight Night: Hunt vs. Nelson

1021
Significant strikes landed by Rampage in UFC/PRIDE/WEC/Strikeforce competition, 3rd most by any fighter 199 pounds or heavier in combined history

690
Of those sig. strikes landed were in the clinch or on the ground, most in UFC/PRIDE/WEC/Strikeforce combined history

8
Knockdowns scored by Rampage inside the Octagon, 4th most in UFC light heavyweight history behind Mauricio Rua’s 9, Lyoto Machida’s 11, and UFC Hall of Famer Chuck Liddell’s 14

2
KO/TKOs via slam by Rampage, only fighter in UFC/PRIDE/WEC/Strikeforce history to do so

12
Current ranking of Fabio Maldonado as a UFC light heavyweight

10
Current ranking of Michael Bisping as a UFC middleweight

11
Wins by “The Count” at 185 pounds inside the Octagon, tied for 4th most in UFC middleweight history

3:24:46
Octagon time by Bisping as a middleweight, 2nd most in UFC middleweight history behind Yushin Okami’s 3:40:20

912
Significant strikes landed by The Count, most in UFC middleweight history

1095
Significant strikes landed by Bisping in UFC competition, 2nd most in UFC history behind Georges St-Pierre’s 1,254

9
KO/TKOs by Bisping inside the Octagon, tied for 4th most in UFC history

2
Times as a middleweight, Bisping has landed 100+ significant strikes (Yoshihiro Akiyama and Jason Miller), only UFC middleweight to do so

11
Current ranking of CB Dollaway as a UFC middleweight

29
Takedowns by “The Doberman”, tied for 4th most in UFC middleweight history

65.5
Percentage of those takedowns were started from the clinch

39
Seconds it took for The Doberman to score a knockout of Cezar Ferreira, fastest finish in Dollaway’s UFC career