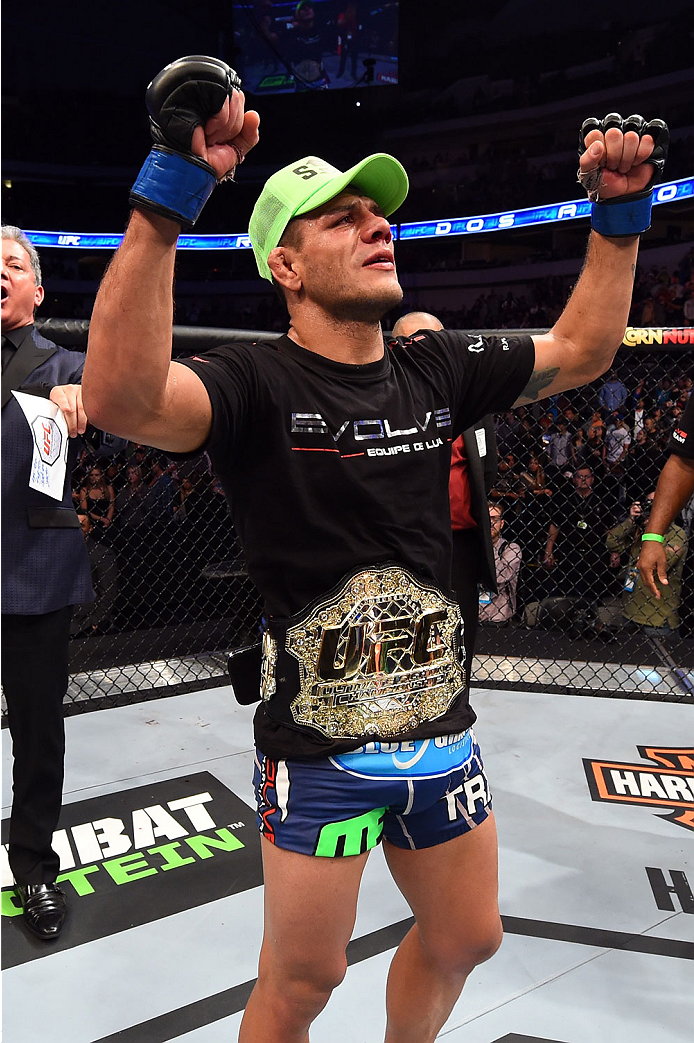 RAFAEL’S REIGN BEGINS
That’s why they fight the fights. That was the prevailing thought throughout Saturday’s Master Class by Professor Rafael dos Anjos against Anthony Pettis. As I wrote last night, dos Anjos had plenty of respect from the MMA world and was expected to be a threat to Pettis, but not enough of one to actually win the fight. Well, those of us who picked against RDA were wrong – in a big way. The Brazilian has looked like a different fighter since his win over Jason High last June, and it all comes down to his striking. Master Rafael Cordeiro has done a wonderful job leading the way for the hard-working dos Anjos, and with a fearless confidence against an ultra-dangerous Pettis, RDA wasn’t going to be denied. Of course, celebration time will be brief for the new champion, as the winner of the upcoming Khabib Nurmagomedov-Donald Cerrone bout will be screaming for his head and both fights have the potential to be epics. Cerrone lost to dos Anjos before, but his recent hot streak has the world amped up to see him get his first shot at gold. As for the unbeaten Nurmagomedov, he’s the last man to beat dos Anjos, so a great storyline is already in place for that one. As for Pettis, fights against Michael Johnson, Edson Barboza, Bobby Green or Tony Ferguson – especially Barboza – are all fun matchups. Yeah, it’s a great time to be a fan of lightweight MMA, and there ain’t nothing wrong with a little shakeup at the top.

JOANNA CHAMPION
One of my favorite aspects of MMA is that, unlike boxing, UFC titles mean something. There are ten titles, one for each division. So when one changes hands, that’s a big deal. Two on one night, that’s even more notable. And while Rafael dos Anjos’ win over Anthony Pettis for the lightweight crown may get more attention, the ascension of Joanna Jedrzejczyk to the UFC strawweight title deserves just as much play. Going in, most believed that the result of her fight against Carla Esparza hinged on the Poland native’s ability to keep the fight standing. Well, we all saw what happened at American Airlines Center. That was surprising in itself, given Esparza’s wrestling pedigree. What was even more shocking though was that Esparza clearly didn’t have a Plan B. Once her wrestling was taken away, Jedrzejczyk dominated, with it just being a matter of time before the end came. It was the culmination of a lead-up in which the fight world fell in love with the quietly charismatic Jedrzejczyk, and while most eyes point to her first defense being a rematch against Claudia Gadelha, should she get past Aisling Daly next month, I don’t think I’m alone in hoping we get to see Jedrzejczyk against fellow striker Joanne Calderwood in a five-rounder sooner rather than later.

WELTERWEIGHT BUSINESS
Some may have been disappointed with Johny Hendricks’ return to wrestling against Matt Brown, but in the 170-pound shark tank, you’ve got to do what is necessary to give yourself the best chance to win on fight night, and against Brown, “Bigg Rigg” brought the fight to his wheelhouse and kept it there. Could a shot against the winner of July’s Robbie Lawler-Rory MacDonald be next? That’s a long wait for Hendricks, so an elimination bout against number three-ranked Tyron Woodley makes sense once “The Chosen One” returns from a foot injury. As for the rest of the division, call me crazy, but as Hendricks-Brown was going on I couldn’t help but think “it would be cool to see Georges St-Pierre back in the middle of this division again.” Don’t read that as any inside dope that GSP is returning, because it isn’t. Just one of those things where you wouldn’t mind seeing one of the greats back in the Octagon again. If the former welterweight champ has strapped on the gloves for the last time, I would respect that decision and wish him well, but selfishly, I’d want to see one more run.

CEJUDO’S MESSAGE
While I don’t understand it, I appreciate Henry Cejudo’s insistence on giving flyweight another shot after missing the mark previously in his career. He told me it was a personal thing, and he not only hit 125 pounds on Friday, he followed it up with a clear-cut win over former world title challenger Chris Cariaso on Saturday. So expect him to stay here a while, and in this division, a couple more wins could land him a shot at champion Demetrious Johnson. What better reason is there to make that cut than that? Now that decision looks a lot better, doesn’t it?

ROSS THE BOSS
As noted in my pre-fight feature, Ross Pearson sounded more fired up than I ever heard him as he prepared to face Sam Stout at UFC 185, and he fought like it on Saturday, ending his bout with a blistering left hook that earned him a Performance of the Night bonus. In talking to fighters over the last 19-plus years, I can usually pick up when someone is telling me something that sounds good on the page or that they want to believe, and when it’s the (pardon the pun) “Real Deal.” When I spoke to Pearson, his determination to succeed, his happiness at being back at Alliance MMA full-time, and his desire to one day win a 155-pound title was evident and real. And while only time will tell if he gets that title, it’s going to be fun watching him try.

ROY AND THE REEM
With wins in three of his last four bouts, Alistair Overeem has quietly started to put together the kind of run everyone expected from him when he started in the UFC in 2011, and against Roy Nelson, “The Reem” looked as sharp as ever. What may hurt him down the line though is his refusal to take his game to the next gear when he has an opponent hurt. Nelson was rocked on several occasions, and while I understand that “Big Country” is like a dangerous zombie you can’t take out, Overeem’s patience almost cost him when Nelson dropped him in the closing moments of the bout. As for Nelson, yes, he’s lost four of his last five, but I would always pay to watch him fight simply because he’s one of the rare fighters in the game who is dangerous from start to finish.

DARIUSH, DUFFY, AND THE IRON LADY
You hear fighters talking about evolution all the time. Not the Charles Darwin kind, but the kind in which they’re adding wrinkles to their game, getting better, and becoming more well-rounded fighters. For some it’s just talk – for others, it’s a reality that will make this sport even better in the coming years and leave those who don’t follow suit in the dust. On Saturday, Beneil Dariush, Joseph Duffy and Germaine de Randamie all delivered performances that should have left fight fans wanting for more because they were that good. Kudos to that trio for showing that to move forward in MMA, you have to get better at everything.