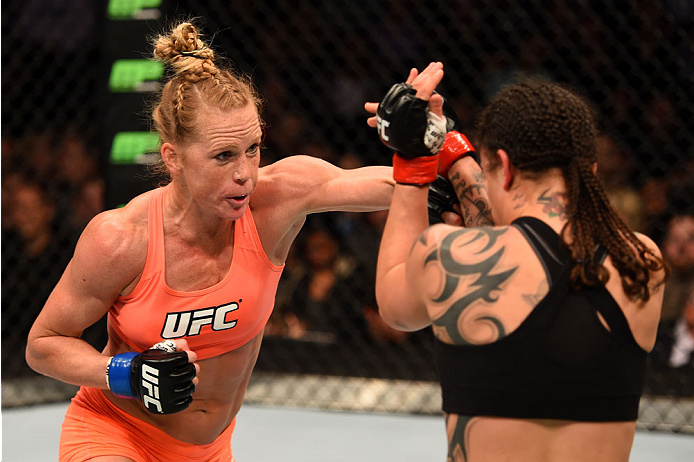 HAPPY HOLMCOMING
I’ve covered Holly Holm’s career since she held the top spot on female boxing’s pound-for-pound list, so when she came over to MMA full-time, I was obviously intrigued by what she would do if she made it to the UFC. Well, after her win over Raquel Pennington, I think “The Preacher’s Daughter” may have found her home. Was it the most spectacular win in the world? No, but it was the type of victory you want in a debut. Holm showed her skills, left room for improvement, and gutted things out when Pennington made a late run. And while you don’t normally look at a knockdown as the most impressive part of a fight for the one who got knocked down, when Holm got dropped in the final round, the way she jumped up and started throwing combinations made me smile. Yes, Holm is soft-spoken, humble, and all that good stuff, but she’s all-fighter, and as she continues to get her feet wet and gets more experience, she’s going to be a serious threat to anyone in the division.

EL CUCUY ARRIVES (HOPEFULLY)
If you’ve followed Tony Ferguson’s career here on UFC.com, you’ll see that no one’s been higher on this young man than yours truly. From the time he came off The Ultimate Fighter, he’s done everything someone should do to not just become a legitimate contender, but a star. But “El Cucuy” has been seemingly ignored over the years, something that baffles me. But after his quick and dominant destruction of Gleison Tibau, can Ferguson possibly be ignored again when it comes to a spot in the lightweight rankings? If there is someone on the fence, here’s a little primer: Ferguson is 8-1 in the UFC, he’s finished six of those wins, and he holds victories over Tibau, Abel Trujillo, Danny Castillo, Katsunori Kikuno, Ramsey Nijem and Yves Edwards, to name a few. He’s had one bad fight, folks, a decision loss to Michael Johnson that took place almost three years ago. Give the man his due. He earned it.

BRAHMA’S BIG WIN
I was an Alan Jouban fan the first time I saw him catch heat from Seth Baczynski, bite down on his mouthpiece and roar back to score a knockout win, all in the space of four minutes and 23 seconds. And though the Louisiana native received (and receives) a lot of attention for his modeling career, the best compliment I can pay him – and I did – is that he doesn’t fight like a guy trying to protect his face. Of course, like any great action fighter, he says his intention isn’t to get into wars, but once he gets hit, it’s game on. Saturday night, it was shaping up to be another typical Jouban fight against Richard Walsh, but with a vicious elbow and some follow-up shots, he got the Australian out of there without having to dig deep into his heart reserves. That’s a good thing for Jouban’s fighting longevity, and for us, it was still exciting from start to finish. Yeah, let’s add “Brahma” to the list of folks I’d pay to watch fight.

WHAT’S THE FUTURE FOR MUNOZ AND KOSCHECK?
In the fight game, being in your mid to late-thirties and having a losing streak means that every fight is cause for fans and media to question whether it’s time to hang up the gloves. For 37-year-olds Mark Munoz and Josh Koscheck, that’s the debate going on at the moment, and while I can make what I think is an educated guess from the outside, I’ve never been one to make that call for any fighter. I think of it like this: take something you’ve done for much of your life, that has become as much a part of you as anything else that you hold dear, and have someone else tell you that you can’t do it anymore. That’s not my place, nor is it the place of anyone else outside of the fighter and his inner circle. Yes, if there are medical reasons to keep someone out of the ring or Octagon, that’s one thing. But when it comes to a fighter’s retirement, he or she has to make that decision, with the input of family, friends, coaches and management. As for Munoz and Koscheck, both got caught in submissions that should have been stopped quicker by the referee, and while their losing streaks sit at three and four, respectively, I would like to see both of them get one more shot to prove that they should still be competing at this level, Munoz in the UFC’s first show in Manila this spring, and Koscheck against someone perhaps in the bottom half of the welterweight top ten.

MEANS BUSINESS
Tim Means may be one of the most underrated fighters in the UFC, and as such, it surprised me when several folks saw him as an underdog to former TUF 19 finalist Dhiego Lima. Yes, Lima is a talented prospect, but Means is just, well, mean. And in these prospect vs. veteran meetings, mean goes a long way. The Albuquerque prospect, confident from the start, didn’t get any reasons from Lima not to have that attitude in the early going, and once that was established, it was just a matter of time before “The Dirty Bird” struck and took the Brazilian out. Means did just that at 2:17 of the first round, and now, with three consecutive wins, he should be in line for a top 15 foe sometime real soon.

THIS AND THAT
Roan Carneiro, like his Saturday opponent Mark Munoz, is one of the good guys of the game, so it was nice to see him pick up the win in his first UFC bout since 2008. Expected to go back to welterweight after fighting Munoz at 185 pounds, the 36-year-old Carneiro will have to waste no time if he wants to make a title run, but in the meantime, he will be a tough out for anyone he faces in the Octagon…I don’t know if we saw the “dark side” of Jake Ellenberger against Josh Koscheck, but “The Juggernaut” certainly was sharp as he broke a three-fight losing skid. Ellenberger’s output while striking was sporadic, but when he threw and landed, he got Koscheck’s attention, and his ability to surprise everyone with the choke that eventually ended the bout showed that he was focused from the opening bell until the finish, a good sign for his future at 170 pounds…I don’t know how far guys like Derrick Lewis, Masio Fullen and Alex Torres will go in the UFC, but I can’t wait to see the trio fight again, if only because when they’re in there, they’re fighting and trying to finish. You can’t put a ranking number on that type of excitement. Valmir Lazaro vs. James Krause was a solid scrap, and while it was a nip and tuck fight throughout, I think the judges got it right.

Visit UFC.com on Monday for more UFC 184 musings on the main event and the reign of Ronda Rousey