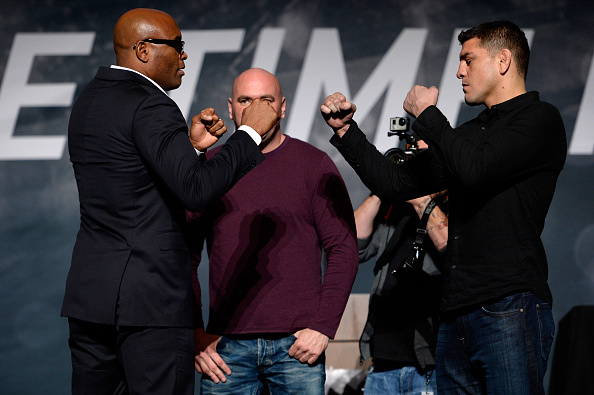 1
Current ranking of Anderson Silva as a UFC middleweight

16
Wins by “The Spider” inside the Octagon, tied for 3rd most in UFC history behind UFC Hall of Famer Matt Hughes’ 18 and former UFC welterweight champion Georges St-Pierre’s 19

12
Post-fight bonuses by Silva, 2nd most in UFC history behind Joe Lauzons’ 13

14
Finishes by The Spider, most in UFC history

11
KO/TKOs by Silva, tied with Vitor Belfort for most in UFC history

4
KO/TKOs by Silva via a knee or a kick, tied for most in UFC history

17
Knockdowns by Silva, most in UFC history

7
Of those knockdowns came in the clinch, most in UFC history

21
Finishes by Diaz across his 26 career wins

13
KO/TKOs by Diaz in his career

991
Of those significant strikes were landed at distance, most in combined history

1,536
Total strikes landed by Diaz in the UFC, 3rd most in UFC welterweight history

5
Times in Diaz’s career he has landed at least 100 significant strikes, more than any other fighter in UFC/Strikeforce/PRIDE/WEC combined history

5
Submission wins earned by Diaz from his last 21 attempts

5
Knockdowns by The Chosen One in the UFC

352
Significant strikes landed by The Chosen One in UFC/Strikeforce

40.6
Percentage of those strikes occurred in the clinch, largest proportion among active fighters (min. 350 att.)

7
Current ranking of Kelvin Gastelum as a UFC welterweight

11
Wins and 0 losses by Gastelum

5
Of those wins were inside the Octagon

187
Significant strikes landed by Gastelum in the UFC

93
Percentage of those strikes were standing, UFC average is 76.7

88.9
Takedown defense percentage by Jake Ellenberger who Gastelum took down, only second time Ellenberger had been takedown down in his 13 UFC fight career