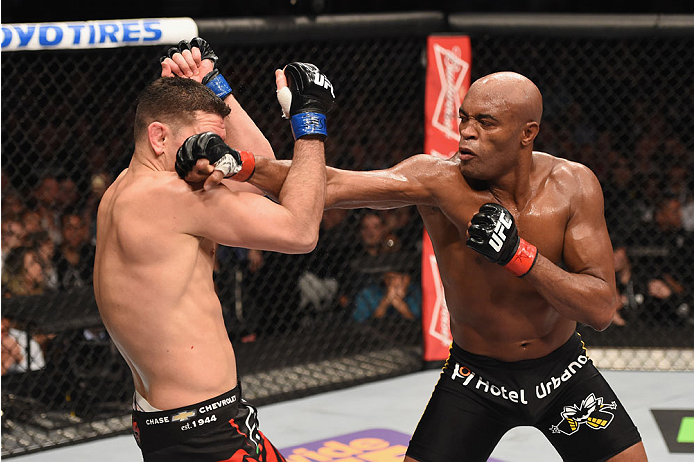 THE SPIDER
Welcome back Anderson Silva. For all the post-fight analysis of the Brazilian icon’s performance last Saturday against Nick Diaz, maybe the best course of action is to simply say that it was great to see him back. Fighters, especially 39-year-old ones, don’t generally come back at a high level from an injury similar to the leg break Silva suffered in December of 2013. It just doesn’t happen. And to return in a main event against a fighter the caliber of Diaz and not just win, but score a near-shutout, proves that Silva’s status as the best ever is secure. Was he a prime Anderson Silva? No. Maybe that has something to do with his year-plus away from the sport or his approaching 40th birthday, so the question is, what now? Does he listen to the pleas of his family and retire, or does he continue to fight and attempt to defy Father Time for a little longer? Only time will tell that tale, as Silva said he will discuss his future with his family before making a decision about his fighting future. If he does retire, I wouldn’t have a problem with that. There is nothing left to prove, and to go out on top after coming back from an injury that may have ended the career of other athletes is the perfect way to leave. If he does decide to return, how about just one more fight, in Brazil, in the biggest stadium the UFC can find? Either way, nothing will change the way fight fans view Anderson Silva.

DIAZ
I get into the fights for free. It’s a perk of the job I don’t take lightly. But if I had to pay to get in, I would always find the money to watch Nick Diaz compete. So yeah, he lost in the UFC 183 main event to Anderson Silva, but while nothing would have changed my view of Silva based on the result of that fight, the same goes for Diaz. No matter how a fight plays out, the Stockton native always makes it compelling, and even though he is 1-3 in his last four fights, the “1” was against BJ Penn and the “3” was against Silva, Georges St-Pierre and Carlos Condit. Diaz is one of the most interesting – and best - fighters of his era, and while I wouldn’t have an issue with Silva calling it quits at 39, if Diaz does the same at 31, that would be a severe blow to a sport that can always use another Nick Diaz fight – or a dozen.

T-WOOD
I will be the first to admit that while I remain as objective as I can be in my daily duties, I do have my favorites in this game, and Tyron Woodley falls into this category. So while I wasn’t blown away with his decision win over Kelvin Gastelum, it does keep “The Chosen One” in the title conversation at 170 pounds. But one of the reasons why he’s in my circle of favorites isn’t because his right hand can make opponents question their vocation in life, but because he didn’t want to collect on the fine imposed on Gastelum for coming in at 180 pounds for their welterweight bout. That’s class, and we can never have enough of that these days. Kudos, Mr. Woodley.

WEIGHTY ISSUES
The boss has spoken. After Gastelum and John Lineker missed weight again for their bouts on Saturday, UFC president Dana White said that we have seen the last of both of them at welterweight and flyweight, prospectively. It was the right call too. Regardless of the circumstances, if you can’t hit your contracted weight every time out, it’s unfair to your opponents and removes the idea of a level playing field. It’s not healthy either, so I expect to see even better versions of Gastelum and Lineker in the future due to the fact that they’re not exhausting and depleting themselves in an attempt to make weight. Hitting bottom and then deciding to move up in weight did wonders for the next man to compete for the UFC light heavyweight title, former welterweight Anthony Johnson, and there’s no reason to doubt the same results from Gastelum and Lineker.

RAGING AL
I thought I was just being biased as a fellow New Yorker, but Al Iaquinta’s second round finish of Joe Lauzon proved that his late-2014 knockouts of Rodrigo Damm and Ross Pearson were no flukes. I can’t recall such a positive progression in less than a year than the one Iaquinta has delivered since his May 2014 loss to Mitch Clarke, and it’s clear that after halting Lauzon, “Raging” Al has made his case as a legitimate 155-pound contender with a bright future and a likely contest with a top 15 opponent in his next outing.

THALES AND THIAGO
When fight fans talk about Brazil’s place on the UFC landscape, there are usually three schools of thought. First, they will talk about the legends like Silva, Minotauro Nogueira and Shogun Rua. Then there’s the current crop of superstars like Jose Aldo, Lyoto Machida and Renan Barao. And finally, it’s the young guns and rising stars, with a guy like Erick Silva coming to mind immediately. But what about the vets with plenty of gas left in their tank like Thales Leites and Thiago Alves? Leites and Alves both picked up Performance of the Night bonuses Saturday night, and rightfully so. Before finishing their opponents in the second round, Leites and Alves went through hell against Tim Boetsch and Jordan Mein, respectively. Both roared back, ended their bouts, and continued their road back to the top. Both have challenged for world titles and lost, but older and wiser now, they’re going to give anyone in their division a tough time, and it’s good to see them enjoying their current run.

MISS MIESHA
As I wrote in my pre-fight feature on her, Miesha Tate’s nickname “Cupcake” is a jab at those who assumed that an attractive young lady can’t fight, especially not at the highest level of the sport. But after I watched her take the best of Olympic Silver medalist Sara McMann at UFC 183 and come back to win yet again, I think a quote from Michele A. Roberts, the executive director of the NBA Players Association is more appropriate:

Roberts was quoted in an August 2014 New York Times article as saying “My past is littered with the bones of men who were foolish enough to think I was someone they could sleep on.”

Tate, one of the toughest competitors in the UFC, can’t be slept on anymore.