The UFC will kick off 2015 with potentially one of the biggest title fights in company history as Jon “Bones” Jones defends his light heavyweight title against undefeated, two-time Olympian Daniel Cormier in a bout for the ages.

Both fighters are virtually unscathed during their respective MMA careers and Cormier may stand as Jones' toughest test to date. Then again, Jones has been nearly untouchable during his almost three-year reign as champion, so he's always going to be a tough one to pick against.

In the co-main event, Donald “Cowboy” Cerrone looks to start the New Year just like he ended the last one after closing 2014 with a perfect 4-0 record that included three post-fight bonuses and three finishes. His opponent, Myles Jury, is an undefeated prospect who recently made waves when he finished former PRIDE champion Takanori Gomi by knockout, the first person in over 45 professional fights to finish the Japanese legend by strikes.

So as we gear up for what should be a tremendous start to 2015, let's look ahead with our fantasy preview for UFC 182: Jones vs. Cormier as we make our picks for the locks, the upsets and everything in between on what should be one of the best cards of the entire year.

These are the fighters with the best chance of coming away with a victory at UFC 182. While this is mixed martial arts - which means nothing is guaranteed - these are the favorites that will be the hardest to pick against come Saturday night in Las Vegas

Horiguchi comes into UFC 182 with the largest odds on his side, although he's facing a tough challenge in former Ultimate Fighter competitor Louis Gaudinot. While he's not as highly touted, Gaudinot has one of the biggest wins in the flyweight division with a submission over highly-ranked John Lineker. Unfortunately, since that fight Gaudinot has been mired in mediocrity with a loss to Tim Elliott and then a no contest against Phil Harris.

Horiguchi is a legitimate threat to the 125-pound title, but fighting on the main card for UFC 182 is a great chance for this Japanese wrecking machine to prove his worth in the division. He's landing 4.65 strikes per minute during his UFC career and he mixes things up well with over one and a half takedowns per fight. Gaudinot isn't known for his pace, although he's not afraid to mix things up, but he might struggle to deal with the kind of blistering offense that Horiguchi will offer over the course of three rounds.

Despite Horiguchi's finish rate (71 percent), this fight should still probably make it to a decision, but bet big on the favorite to get the job done.

Since dropping down to welterweight, Hector Lombard has been nothing short of spectacular and he should keep that streak going at UFC 182. He's facing returning fighter Josh Burkman, who last fought in the UFC in 2008. Since that time, Burkman has amassed a solid 9-2 record while picking up wins over notable names like Jon Fitch, Aaron Simpson and Gerald Harris. Still, for all the weapons Burkman possesses, he's got a stiff test facing Lombard in his comeback fight.

Lombard is a power puncher with the emphasis on power. He throws hard and heavy from the opening bell until the final horn, although he's definitely more dangerous in the first round than he'll be at any other point in the fight. Lombard is also a former Olympian in Judo, so don't discount his takedowns, especially with the way he controls opponents with his hips and superior body placement at any point during the fight. Considering Lombard's 77 percent finishing rate and ability to hurt opponents anywhere this fight goes, there's a good chance he'll earn a bonus when the night is over.

PREDICTION: Hector Lombard by knockout, round 1

The odds aren't as lopsided in this matchup, but Marquardt should be a lock to pick up a win on Saturday night unless he just forgets to show up in his bout against Brad Tavares. Marquardt is superior in just about every facet of the game - from his hard-hitting strikes to his world class jiu-jitsu. Marquardt probably made a huge mistake dropping down to welterweight for a few fights, where the body draining effects of a massive weight cut also seemed to affect his ability to take a punch.

At middleweight, Marquardt was a perennial contender, who only decided to drop down after a hard-fought battle with Yushin Okami cost him a shot at the title a few years back. Now that he's returned to 185, Marquardt may not contend with the best of the best in the division right now, but he's still an ultra-dangerous opponent for anyone in the weight class, and that includes a fringe contender like Tavares. Marquardt might even be able to duplicate what Tim Boetsch did in his fight with Tavares, considering he hits like a mule and doesn't mind winging punches to get the job done.

PREDICTION: Nate Marquardt by TKO, round 3

It's actually shocking that Castillo is only a -210 favorite in this fight considering the level of competition he's faced throughout his career in the UFC and WEC. If the judging went another direction, Castillo could really be entering the night on a five-fight win streak, but he lost a close decision to Edson Barboza and another to Tony Ferguson. Even in his loss to Michael Johnson back in 2012, Castillo was pitching a shutout until he got caught and finished in the second round.

Castillo has a dangerous mix of boxing with a prolific wrestling game in his back pocket. He averages over three takedowns per fight with almost 42 percent accuracy. His striking has improved dramatically under the tutelage of Duane “Bang” Ludwig as well. Paul Felder is a good prospect coming out of the Gracie and Jackson camps, but this is simply too much, too soon for this newcomer. Unless he pulls off an incredible upset, he's going to add the first loss to his professional record this weekend.

PREDICTION: Danny Castillo by TKO, round 2

The final lock for UFC 182 comes by way of veteran UFC lightweight Evan Dunham who, despite three losses in a row, still has the potential to give anyone in the division problems. Dunham is extremely well-rounded, and when you really dig deep into the fighters he's faced, it's not hard to figure out why he's lost three in a row (Rafael dos Anjos, Donald Cerrone and Edson Barboza). Dunham will probably give Damm nightmares as long as he comes into this fight healthy in both mind and body, which remains a small question considering his current losing streak.

Still, unless Damm finds a way to create openings that he's rarely found in past UFC fights, this should be Dunham's chance to get back on track.

These are the matchups that are too close to call, but there might be an opportunity to steal one if you play your cards right with the picks 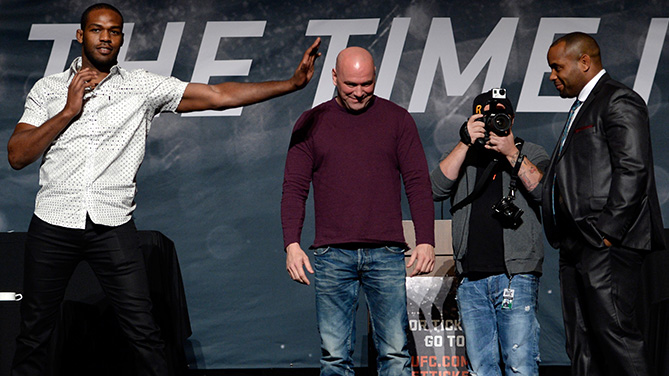 The top of the list is the main event bout between Jon Jones and Daniel Cormier because this fight is not only close according to the oddsmakers, but these are two of the very best fighters in the world, so it always makes it a tougher contest to make a pick. Jones has defended his UFC light heavyweight title a record seven times, but he did show his first signs of struggle when facing Alexander Gustafsson two fights ago. Jones came back with a big win over Glover Teixeira, but did look somewhat tentative in a few exchanges, maybe out of the fear that he might get cracked by the heavy hitter from Brazil.

Cormier will challenge Jones in ways he's never faced before in the Octagon. Cormier is a two-time Olympic wrestler who has manhandled heavyweights like Josh Barnett before, so despite Jones’ incredible reach and technique, it may not matter when it comes down to brute strength in the clinch and on the ground. Cormier is also a hard hitter on the inside and he knows how to barrel forward to get the fight into his domain. This fight really comes down to who controls the pace and which fighter can maintain it for longer stretches during each round. Jones is impossibly tough to pick against, but if there's one fighter with the confidence and ability to give him problems, it's Daniel Cormier 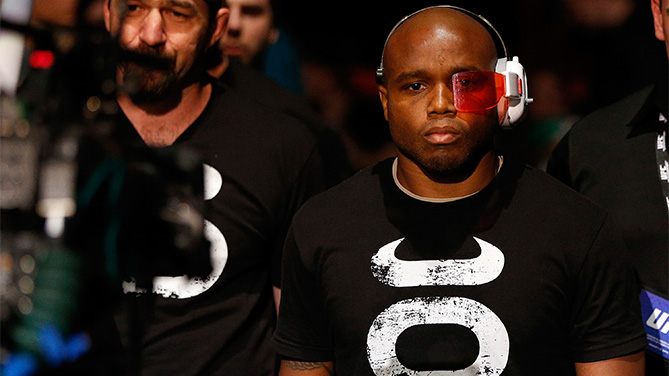 On paper this should be a win for Marcus Brimage considering the wealth of UFC experience he'll tout over newcomer Cody Garbrandt. Brimage is tough matchup for anyone at 135 pounds – he’s fast, hits hard and is impossibly tough to get to the ground. Garbrandt might be new, but he does have a lot of positives on his side. He trains with a fantastic group of fighters at Team Alpha Male and has a huge amateur boxing record on his side as well. Getting into a slugfest with Brimage might turn out to be bad for his health, but this could be an early pick for Fight of the Night. That also means it could be a really tough matchup to pick a winner in.

PREDICTION: Marcus Brimage by TKO, round 3 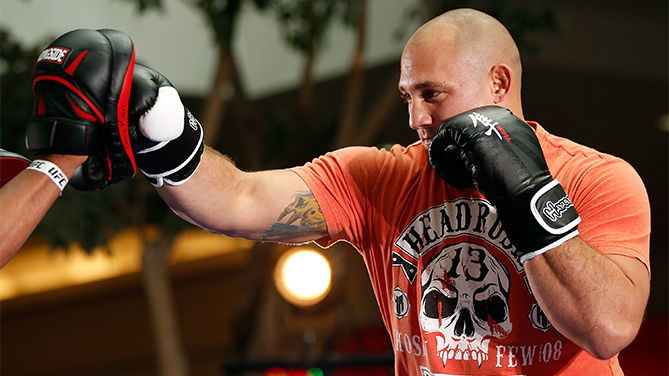 These guys are heavyweights, so that should be enough reason to consider this a toss-up. Both guys hit really hard and have big time knockout power. Where Shawn Jordan maintains a slight advantage is the fact that he's not giving up a huge reach advantage in this matchup like he does in so many fights at heavyweight in the UFC. Jared Cannonier is 5'11" so he won't have much size on Jordan, but he will maintain a good speed advantage if he can avoid getting caught in the pocket exchanging with the former LSU football player.

PREDICTION: Shawn Jordan by TKO, round 1 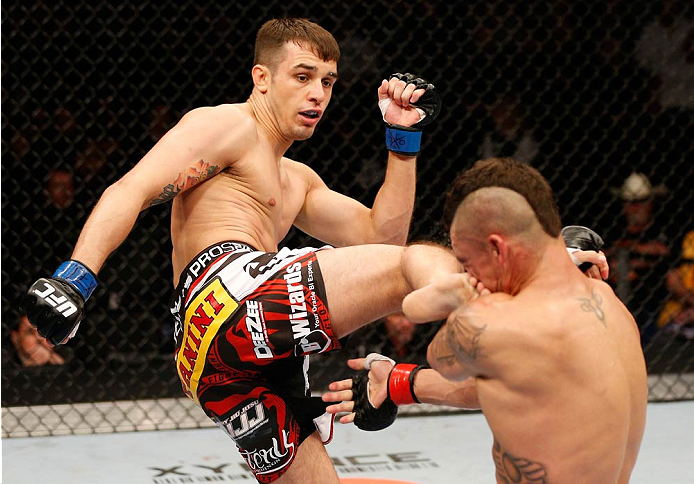 On the UFC 182 fight card there's one big upset to keep an eye on and that's the co-main event between Myles Jury and Donald “Cowboy” Cerrone. While Cerrone has been a terminator lately, Jury might be the perfect spoiler to stop his current run. Jury is a fast starter with an 80 percent finishing rate, and the fact that he comes out of the gates in a hurry could be the best weapon against Cerrone, who almost always has his worst moments in the opening stanza.

Combine Jury's fast hands and incredible defense (he boasts almost 77 percent defense, which is 20 points higher than his opponent) plus an underrated wrestling game where he's landing takedowns with almost 67 percent accuracy, and he could be the nightmare Cerrone just can't wake up from on fight night. This is by far Jury's biggest fight so there's always a chance nerves come into play, but if he looks like he's been fighting lately, he might just steal the show with a big win on Saturday night.