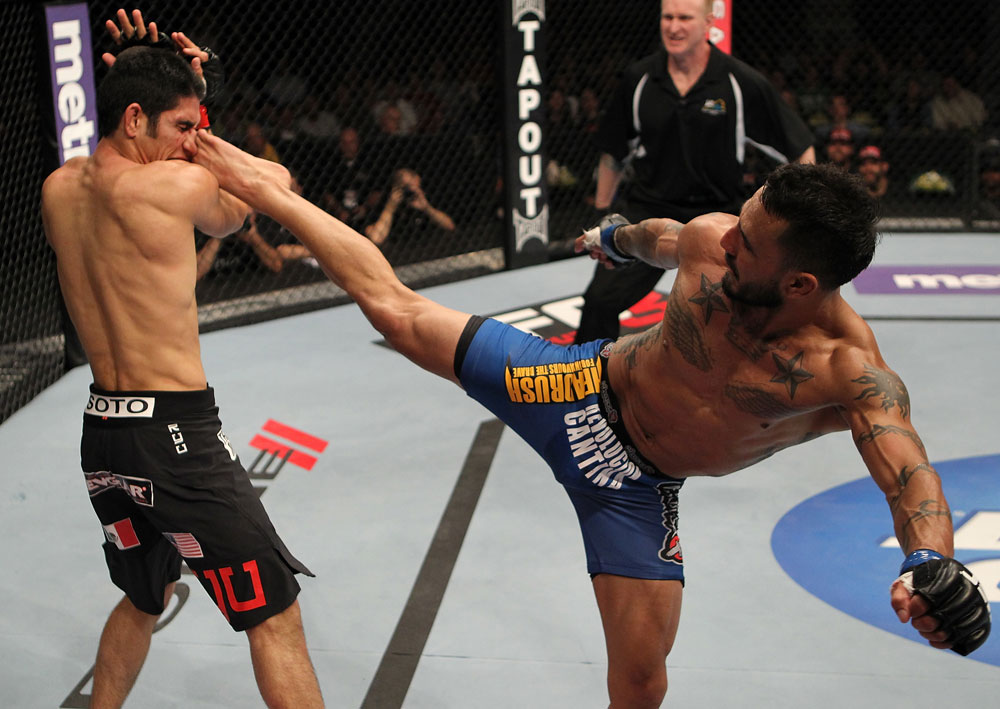 From top to bottom, UFC 181 might be the most stacked card of the year because not only does the main card feature two title fights, but the prelims are loaded, with former WEC champion Urijah Faber leading the charge against Francisco Rivera, as well as both recent winners from The Ultimate Fighter making their Octagon debuts on the same night.

Faber is one of the most consistent performers in the history of the lighter weight divisions, but for his upcoming fight against Rivera he'll have to deal with a heavy-handed striker with nothing to lose.

While The Ultimate Fighter 19 certainly had to deal with some criticism during the season, both Eddie Gordon and Corey Anderson proved that the talent on the show was for real. Both fighters had blistering debuts at the finale in July and now they try to make their mark at UFC 181.

As we gear up for a non-stop weekend of action from Las Vegas, today's fantasy preview will focus on the prelim card for UFC 181, focusing in on the key matchups taking place on FOX Sports 1 Saturday night.

Urijah Faber enjoys the most comfortable odds of anyone on the UFC 181 fight card, so he's probably going to be the safest pick of all 11 fights taking place on Saturday night. There's also the factor that through 38 professional bouts, Faber has never lost a non-title fight. Ever. In other words, Rivera is going to have to pull off the impossible to get the win.

It's an endeavor Rivera surely welcomes. He has the ability to give Faber problems if he can find a way to truly let his hands go. Rivera has a 70 percent finishing percentage by knockout or TKO and he lands over four strikes per minute. He might have the best knockout power of anyone at bantamweight and he's not just throwing haymakers. Rivera lands with nearly 44-percent accuracy, so he targets his opponents and puts them down with precision as well.

Unfortunately, Rivera's only hope against Faber is finding a home for his one punch that could potentially floor the former featherweight champion. Faber's boxing is fundamentally sound, and working with former coach Duane “Bang” Ludwig did wonders for his overall kickboxing game as well. Faber's wrestling and submission game are where he thrives and knowing that Rivera's best chance to win is with a Hail Mary punch or kick, “The California Kid” is well aware that his odds go astronomically high if this fight hits the ground.

Watch for Faber's transitions and scrambles, where he finds a way to attach himself to an opponent's neck either by rear naked choke or guillotine. Either way, when he latches on, Rivera isn't getting out.

It's a bit surprising going into this middleweight matchup that TUF 19 winner Eddie Gordon isn't a bigger favorite considering Samman - another Ultimate Fighter veteran - is coming off a near two-year layoff. Injuries have kept Samman on the sidelines and he's running into a brick wall for his return to the Octagon.

Gordon was still developing while he was on the reality show this past season, but he showed what kind of a buzzsaw he could be when he took on Dhiego Lima in the finals back in July. Gordon trains every day with UFC middleweight champion Chris Weidman and coaches Ray Longo and Matt Serra. Combine that with the tutelage he gained working with Frankie Edgar (who is also part of the same family of gyms as Longo and Serra), and Gordon is one of those bright prospects to watch in the next year.

Samman won't just roll over and die, and following a long time away from the sport he's definitely got something to prove. He's a very athletic fighter with good reach, active striking and excellent accuracy on the feet. Samman has pulled off submissions in the past, but he prefers to look for the TKO or knockout. It's there that he's playing with fire against a power puncher like Gordon.

Gordon has the ability to just overwhelm opponents with size and power. He's also a better than average wrestler with a nasty array of strikes from the clinch. Gordon likes to trap his opponents against the cage and then unload on them until they fall over or just can't handle the pressure any longer. Samman is a tough challenge, but if he shows any signs of ring rust whatsoever, this fight could be over in a hurry.

The other Ultimate Fighter winner on the card is former wrestling standout Corey Anderson, who might the most talented fighter to come off the reality show in recent years, along with top 10 ranked welterweight Kelvin Gastelum. Anderson is a new breed of wrestler, who has transformed himself in a hybrid fighter with powerful punches at his disposal mixed with an unbreakable grappling game.

Anderson moved his entire camp to New Jersey before July's finale to work with Frankie Edgar and his team and the work showed immediately with his last fight. Anderson stormed through Matt Van Buren in about a minute and he might do the same thing to late notice replacement Justin Jones.

Jones takes this fight on just over a week's notice with three professional fights and a lot of unknowns when it comes to his credentials. He trains under UFC veteran Chris Leben and has finished all of his previous fights, but none of his past opponents were at the level Anderson will occupy on Saturday night.

Anderson is a name to watch in the next two years because he has the game to mimic what Gastelum has done since he finished the reality show. Anderson has explosive wrestling that's nearly impossible to stop, he's a tall, rangy fighter for light heavyweight, similar to champion Jon Jones, and his growth is limitless. He says he wants to become a light heavyweight version of his mentor, Frankie Edgar. If he keeps developing at the pace he's set already, Anderson has a great chance of making that dream come true.

An early candidate for Fight of the Night could be this women's bantamweight matchup between newcomer Ashlee Evans-Smith and former Ultimate Fighter competitor Raquel Pennington.

Pennington is well-known for packing a serious punch and getting into some of the wildest exchanges in the women's division. She had the fight of the season against Jessamyn Duke back on the reality show and she put on a similar performance against Jessica Andrade in her last bout. Pennington is a volume striker, landing over five per minute with 54 percent accuracy.

Evans-Smith may be a newcomer to the UFC, but she's no novice when it comes to fighting. She had a plethora of amateur fights before turning pro and has gone 3-0 since making the move. Evans-Smith is a nasty ground striker who finds an opening and doesn’t let up until the job is done. She's finished her last two opponents in the third round, which shows she has good stamina and doesn't run out of gas until she puts a stamp on her performance. Evans-Smith has struggled with submissions in the past, but this isn't a matchup where that's likely to become a problem. Pennington loves to stand and trade as much as anyone at 135 pounds, so this has the recipe to be a crowd pleaser.

In the end, Evans-Smith should be able to out strike Pennington, and if she gets her hurt late she might even get a stoppage. Chances are, however, this will be a war of attrition won by the smallest of margins.