Taking a look back at Saturday night's UFC 181 event... 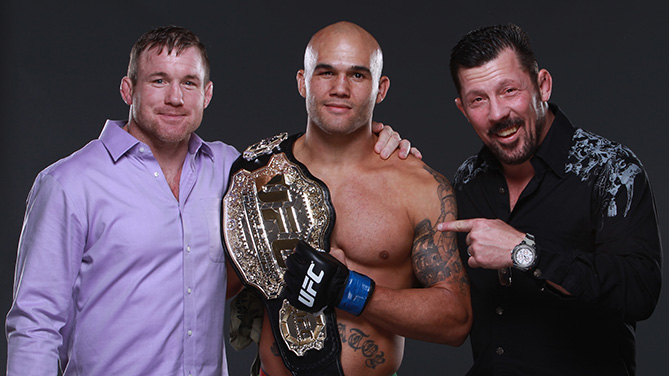 AND NEW…
From the time I started covering mixed martial arts in 2000, the interviews I always looked forward to the most were with members of the Miletich Fighting Systems team. From Miletich and Hughes to Pulver and Horn and everyone in between, no fighters explained the game and the culture better, and no one, I mean no one, had better gym stories. Of course, there’s always an exception to every rule, and the quiet man – at least during interviews – was the kid of the group, Robbie Lawler. Yet oddly enough, that didn’t dull his appeal in the slightest, because when he fought, he fought hard, he looked for the knockout, and he was always swinging with bad intentions. That appeal never waned, even when he was out of the UFC and plying his trade for a number of promotions. And though objectivity is key when you’re covering this sport, you had to root for him when he made his comeback to the UFC in 2013. That didn’t necessarily mean you thought he would do what he’s done since then, but seeing him rise to the top and take the UFC welterweight title from Johny Hendricks last night in Las Vegas was one of those times where you just had to smile. Seeing Hughes and Miletich in the Octagon with him when the verdict was announced only added to the moment. As for the interview stuff, yeah, Lawler’s getting better, but even if he wants to go back to the old Ruthless Robbie, that’s fine too. The champ makes the rules.

IT’S SHOWTIME
Robbie Lawler’s comeback for the ages will likely get the bulk of the Sunday morning attention, but how could you not be impressed with another comeback from the UFC 181 card, Anthony Pettis’ return from a long layoff to submit Gilbert Melendez in the second round? In completing the first successful defense of his UFC lightweight title, “Showtime” silenced the doubters he said have been all around ever since his title-winning effort against Benson Henderson in August of 2013. Honestly, I never saw how anyone could doubt a young man whose only sin was getting injured, but the internet has its way of getting its claws into anyone. Is Pettis the pound-for-pound best? I still hold light heavyweight boss Jon Jones in that top spot, but a year from now, who knows where the Milwaukee native will sit. He certainly has the talent, and he’s defeated top-level foes with relative ease. Now all that’s missing is the type of activity level that will keep him busy against the best and in the public eye. But as of now, I don’t think I’m alone in hoping he makes that walk to the Octagon three times in 2015.

GENTLEMAN GIL
Anyone who has dealt with Gilbert Melendez over the years will say without hesitation that he is one of the classiest competitors in the sport of mixed martial arts. So while it was no surprise to see “El Nino” gracious in defeat after his fight with Anthony Pettis, it was cool that the rest of the world – who may not get the chance to interact with Melendez – got to see the kind of gentleman he is. Yes, I know, it’s expected that an athlete at the elite level should act a certain way, but we all see that such behavior isn’t always a given. So hats off to Melendez, a class act not just for the cameras, but everywhere.

EL CUCUY
I’ve been ringing the bell for Tony Ferguson for a while now, and after a second consecutive Pay-Per-View main card victory, I think the rest of the world will catch on, especially since he showed resilience and adaptability in his win over Abel Trujillo. Rocked and bruised up by Trujillo in the opening round, Ferguson didn’t back down in the heat of battle, and by the second round, he was walking Trujillo down, eventually submitting him at the 4:19 mark. “El Cucuy” will be a handful for anyone at 155 pounds, and by the end of next year, I can see him being in the title picture.

SAMMAN
Josh Samman had more adversity to deal with than most leading up to his return to the Octagon against Eddie Gordon, most notably fighting on the birthday of his late-girlfriend, Hailey, who tragically died in a car accident in August of 2013. Most couldn’t function at an elite level with that on their mind, but Samman did, using the memory of Hailey as fuel to propel him to a victory over Gordon. The fact that he scored a highlight reel knockout that earned him a Performance of the Night bonus just put the cap on a night he will never forget for so many reasons.

ROCKY
Having the nickname “Rocky” puts an added weight on any fighter. You have to battle through adversity and fight through blood and bruises more than the average fighter, and though Raquel Pennington has always competed like that, last night’s win over Ashlee Evans-Smith is probably one for her personal time capsule. Controlled for much of the first round and bleeding from a cut on her forehead, Pennington made a late surge in which she showed that in MMA, every second counts. With one tick of the clock left in the opening frame, she put Evans-Smith to sleep and got the submission win that evened her pro record at 5-5. No one deserved it more than Pennington, who has faced killers for years without an ounce of hesitation. As for Evans-Smith, she showed that she belongs in the UFC, and her classy attitude in defeat makes her another fighter I can’t wait to see compete again.

THIS AND THAT
Travis Browne didn’t seem too happy with his win over Brendan Schaub at UFC 181, and that’s a good thing, because it shows that his desire isn’t just to win, but to do so in spectacular and aesthetically pleasing fashion. And though a first-round knockout of Brendan Schaub looks spectacular on his record, he knows he can do better, and I expect we’ll see better from him the next time out. As for that next time out, I’d love to see “Hapa” in with the winner of next week’s Junior Dos Santos vs. Stipe Miocic bout…Welcome back Todd Duffee. Now can we see you fight three-four times in 2014…It was tough luck for Francisco Rivera in his bout with Urijah Faber, as he took an eye poke before being submitted in the second round. This fight had upset written all over it before the end, and I don’t think anyone would mind seeing the two bantamweights get after it again…Yes, Clay Collard remains on my list of fighters I would pay to see…Sergio Pettis continues to mature in the Octagon, and 2015 is going to be a very interesting one for him…Corey Anderson did what he had to do in a difficult situation on Saturday, beating a gutsy late replacement in Justin Jones. We’ve got to remember that Anderson is still fairly new to the game, so getting opponents switched and dealing with a new stylistic puzzle can be stressful. Anderson handled it like a champ.