Check out some free fights from the stars of UFC 180! 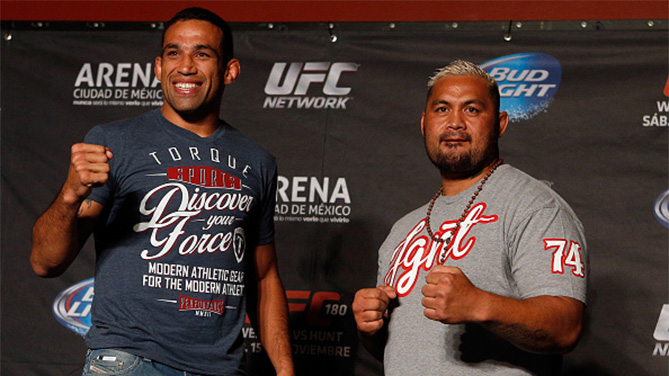 Fabricio Werdum
Since 2008, heavyweight Fabricio Werdum has lost just one fight – a three round decision against Alistair Overeem. Werdum outstruck Overeem 43-32 in that bout and landed the only takedown of the fight. The loss is the only blemish on an impressive eight-fight streak by the Brazilian, where he defeated the likes of Bigfoot Silva, Roy Nelson, Minotauro Nogueira, Travis Browne, and Mike Russow. The most significant win during that span came in 2010 when Werdum ended Fedor Emelianenko’s nine-year, 28-fight win streak, shocking the world and establishing himself as a threat to the heavyweight crown.

MORE: Countdown to UFC 180 | Werdum vs. Vera |Signature Moves | Werdum vs. Russow
Mark Hunt
When Mark Hunt become the first person in the UFC to knockout heavy-handed fighter Roy Nelson, he was immediately thrust into the heavyweight title picture, despite losses in his previous two bouts. So when Hunt was offered the chance to step in for an injured Cain Velasquez at UFC 180, the ‘Super Samoan’ had to capitalize on the golden opportunity. All but four of Hunt’s 19 professional fights have ended in submission or knockout, which gives him more than a puncher’s chance to take home the interim title at UFC 180.

More: Mark Hunt’s Golden Opportunity | Hunt vs. Tuchscherer | Hunt vs. Kongo | Mark Hunt – Why I Fight
Jake Ellenberger
Dangerous welterweight Jake Ellenberger touts a 29-8 career record, with 23 finishes, including 13 in the first round. Ellenberger’s defining moment had to have been his first round knockout of UFC veteran Jake Shields at Fight Night New Orleans in 2011. The win was the fifth in a six-fight win streak and his second straight knockout. Ellenberger suffered setbacks against title contenders Rory MacDonald and Robbie Lawler but knows that a win over undefeated welterweight Kelvin Gastelum in Mexico could propel him in the division’s top five.

MORE: 3 Things You Don’t Know | Ellenberger vs. Pierson | Ellenberger vs. Marquardt | UFC Breakthrough
Kelvin Gastelum
From under-sized underdog to Ultimate Fighter Champion, Kelvin Gastelum has done nothing but impress during his time in the Octagon. Gastelum defeated favorite Uriah Hall to secure the Ultimate Fighter crown, then went on to submit Brian Melancon, and earn decisions over Rick Story and Nico Musoke that thrusted him into the welterweight top 10. Next up is a bout against tough veteran Jake Ellenberger. If Gastelum can manage to stay undefeated, he’d warrant top-5 talent as his next opponent.

MORE: Countdown to UFC 180: Ellenberger vs. Gastelum | #AskAFighter | The Ultimate Fighter Trivia
Ricardo Lamas
Question: What UFC fighter gave Ricardo Lamas his only loss in the Octagon? Answer: Featherweight champion Jose Aldo.
Since Lamas’ transition from the WEC to the UFC, the featherweight contender has dispatched Matt Grice, Cub Swanson, Hatsu Hioki, Hacran Dias and Erik Koch, all in dominating fashion. A win against Bermudez in Mexico will put him one step closer to avenging his only loss under the UFC banner.