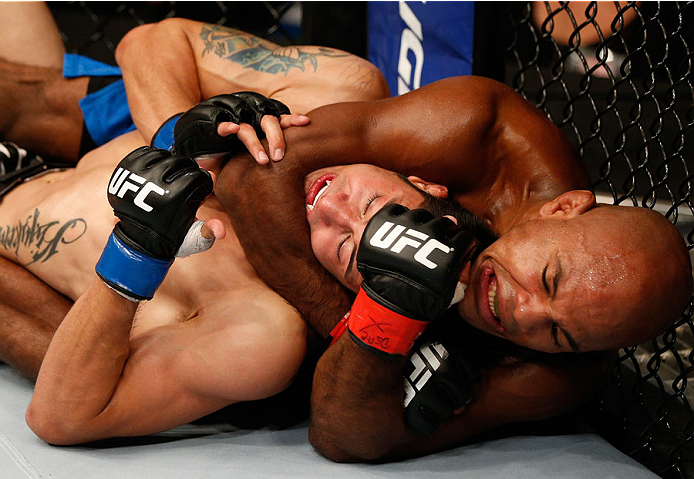 The UFC's return to Brazil this weekend will be met with several local favorites getting back in action, as well as a welterweight fighter looking for his fifth win in 2014.

Former Ultimate Fighter competitor Neil Magny has been on a tear this year, racking up four wins in a row and looking for No. 5 this weekend. He'll have has hands full against former TUF Brazil competitor William Macario, who has proven to be a tough test for anyone in the welterweight division.

Also on the preliminary card at UFC 179, top 15-ranked flyweight Scott Jorgensen will look to climb up the ladder at 125 pounds when he takes on submission specialist Wilson Reis, while Felipe Arantes takes on a member of Team Alpha Male as Andre Fili makes his third appearance in the UFC Octagon.

In today's fantasy preview, we will examine some of the fights on the preliminary card for UFC 179.  These bouts often times decide who wins and who loses in the UFC Pick Em game, so the right picks can be vital to an overall score by the end of Saturday night.

Neil Magny has really started to come into his own during the last year.  The former TUF 16 fighter has picked up four wins in a row in 2014 while looking for a record-tying fifth win as he competes on Saturday night at UFC 179.  Magny got here by rounding out his skill set and becoming more unpredictable in his fights.  He's striking at a higher rate, landing over three significant strikes per minute with 42.3 percent accuracy, and he mixes in a solid wrestling attack with almost three takedowns per fight with 50 percent accuracy.

He's facing a tough test, however, as Macario is less experienced but very dangerous.  The Brazilian has serious power in his hands, where he's landing nearly seven significant strikes per minute, which is an insane rate in the welterweight division.  He's also got pinpoint accuracy with almost 63 percent of his strikes finding their target.   Much like Magny, he's shown great takedowns with over three per fight, and his takedown defense is incredible, as he blocks almost 89 percent attempted against him.

Magny has momentum on his side, which can carry a fighter through to a victory and the way he's looked lately, his confidence is high.  He just has to continue to stick to his attacks with an onslaught of unpredictability, mixing in kickboxing with wrestling and never allowing Macario to get comfortable.  If Magny can't keep Macario guessing, this fight could shift in a hurry.  Macario is a hard puncher with knockout power in both hands and he's not afraid to stand in the pocket and throw down.  He's also very dangerous in the opening round because he's one of the fastest starters in the division.

The safe bet still lies with Magny based on his recent fights, but don't count Macario out to pull off the upset.

The biggest favorite on the entire UFC 179 fight card is submission specialist Yan Cabral, who drops down to 155 pounds for the first time in his upcoming bout against Japanese veteran Naoyuki Kotani.

The oddsmakers are right on the money with this pick considering Cabral's overall skill set and Kotani's lack of success against top fighters throughout his career.  Cabral struggled in his last fight out against a physically strong wrestler in Zak Cummings, which likely precipitated the move down to 155.  Prior to that fight, Cabral had shown tremendous striking, where he lands almost 55 percent of his punches and kicks before taking an opponent to the mat to implement his world-class jiu-jitsu game.  Cabral puts fighters down over three times per 15 minutes and then launches his submission attack, which is stifling and devastating.

Kotani has been in the cage with some of the best fighters in the world throughout his career, but he rarely does well against any of them.  He's a submission fighter as well, so he often looks for the takedown and ground attack, but that will backfire on him in a big way if he opts for that strategy against Cabral.  Kotani is a serviceable veteran, but he's outmatched on the feet and on the ground in this one.

Prediction: Yan Cabral by submission, Round 2

A very intriguing matchup at 125 pounds takes place this weekend between Wilson Reis and Scott Jorgensen.  Both fighters are coming off recent wins, with Reis making his debut at 125 pounds while Jorgensen just picked up his first win in the division after starting off with a rough 0-2 run.

Reis has often been considered one of the most underrated fighters in the world.  He's a tough fighter with good hands and slick submissions and a whole lot of power at his disposal. Reis' only loss in the UFC came by way of split decision to Iuri Alcantara, who has been nothing short of impressive in his run in the bantamweight division.  Reis could be a real contender now that he's at flyweight, and he'll have a chance to prove that on Saturday night.

Jorgensen's run at flyweight has been mostly forgettable up until his last fight, where he beat Danny Martinez by decision.  Jorgensen is a former college wrestler who has fallen in love with throwing his hands lately.  He's landing over three and a half strikes per minute with slightly higher than 40 percent accuracy.  Jorgensen's wrestling is still dangerous and his overall average still stands at over three takedowns per fight, although he hasn't seemed like a wrestling-heavy fighter much at flyweight.  He might be better served avoiding the ground in this one anyway, considering Reis is a serious threat for a submission whether he's on top or bottom.

At 29 years of age, this really seems like the time for Reis to make his run at the belt and it starts with a dominant win over Jorgensen in Brazil.  Reis got a lot of motivation when he finally made it to the UFC.  Now that he might have a serious shot at earning a title fight within the next year at flyweight, there's even more incentive to go out and win.  He should get the job done at UFC 179.

Possibly the hardest fight to predict on the undercard comes from this battle in the featherweight division between Andre Fili and Felipe Arantes.

Fili is returning from his first loss in the UFC while Arantes comes back after a victory over Maximo Blanco in his last fight.  Fili is a high-paced fighter with a good skill set in all facets of the game.  He lands over five significant strikes per minute as well as three takedowns per fight.  He's also very long for this division, standing 5'11" tall, so he'll have a height and reach advantage over Arantes.

During his UFC career, Arantes has shown flashes of brilliance like his TKO win over Godofredo Pepey, while also struggling to separate from his opponents as in his draw with Milton Vieira and his split decision loss to Kevin Souza.  With an accurate striking game where he's landing almost 50 percent of his shots thrown, Arantes has the ability to put a hurting on anyone he faces in the Octagon, but it's just a matter of pulling the trigger.  There are times were Arantes gets gun shy and it allows his opponents to pull back into a fight he might have otherwise won in a shutout.

The key in this fight is Fili's ability to attack and keep Arantes on the defensive.  He's a very offensive fighter so this shouldn't be much of an issue.  If Fili can back Arantes up and punish him with every exchange, by using his superior reach and power he should be able to get a win in this very close fight on the prelims.