"I’m not going to knock him out. He has to stay in there for 25 minutes and take his beating." - Daniel Cormier 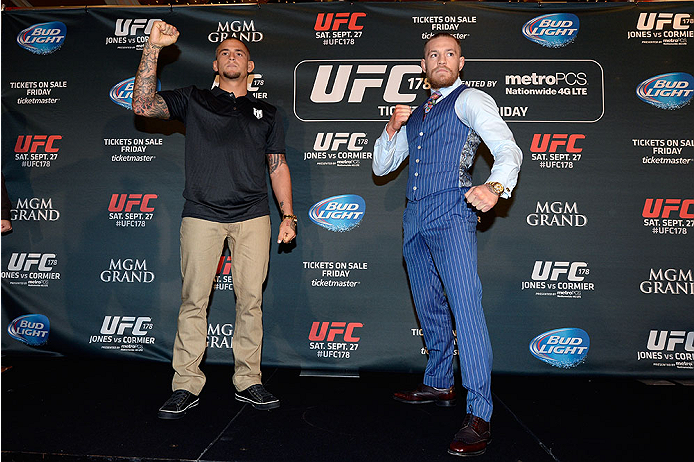 The two-city press tour for UFC 178 got off to an explosive start on Monday in Las Vegas as Jon Jones and Daniel Cormier turned a routine face-off into a scuffle that spilled offstage and made national headlines across the sports world. On Tuesday, the light heavyweight champion and undefeated challenger were reunited for a press stop at Club Nokia at LA Live in Los Angeles and cooler heads prevailed.

Instead of physical exchanges, Jones and Cormier were cordial to one another throughout, with the two light heavyweights keeping things on the lighter side as they focused on their upcoming tilt on September 27 at the MGM Grand Garden Arena in Las Vegas.

The pound-for-pound great apologized for the scuffle yesterday before moving on to how he sees the stylistic matchup with Cormier.

“I’m extremely motivated and inspired. I am confident I’m going to win this fight and I think a lot of people are going to be extremely surprised on how it happens.”

With the light heavyweight champion keeping things on a respectable keel, Cormier followed suit when the questions were aimed in his direction. He responded to the notion that Jones would be looking to take him down when they step into the Octagon at UFC 178, and it was an idea he welcomed.

“I do believe that’s what he wants to do because that’s what he does,” Cormier said. “Ryan Bader was an All-American and Jon took him down right away and finished him. Jon took Chael (Sonnen) down right away and dominated him. As he said, it’s a personal goal to show that had the opportunity presented itself, he would have been successful at that level. I don’t think for a second he wouldn’t have been.

“He would have been one of the very best guys in the NCAA if he had the opportunity. But you know what? I am so happy he’s going to try to take me down because I can defend takedowns. He’s going to get his ass taken down and he won’t be able to get up. He’s going to be stuck there.

“I’m not going to knock him out,” Cormier added. “He has to stay in there for 25 minutes and take his beating.”

While the two fighters in the main event traded jokes during the Q & A, the heat they lacked from their previous appearance was picked up by Conor McGregor and Dustin Poirier. The brash-talking Irishman wasted no time getting his blood pumping as he fielded the media’s questions and launched his answers sharply in the Louisiana native’s direction.

“I am just being myself,” McGregor blasted. “This is who I am. I like to look good and whoop ass. That is what I do best. I’m not trying to be anything but me. On September 27, I’m going to rip Dustin’s head clean off. He thinks it is all talk, but when he wakes up on September 28 with his nose plastered on the other side of his face he’s gonna know it’s not all talk.

“All you have to do is look at Dustin’s last couple of fights. In his last fight he fought a TUF reject, nobody gave a s**t about it, and he got wobbled about 40 times. His chin is deteriorating. Every single contest he gets in he hits one knee. A gust of wind and he does the chicken dance. I’m going to crack him with a jab and he’s going to wobble and I’m going to put him away early. It’s gonna be a first round KO. Mark my words.”

When the ball was dropped into Poirier’s court, the 25-year-old remained true to form. The former WEC prospect turned UFC featherweight contender has made no secret that he will not attempt to keep up with “Notorious” on the microphone, and he plans to let his fists do the talking when the cage door closes in Las Vegas. He reaffirmed that sentiment on Tuesday as he addressed his upcoming tilt with the scrappy Dublin native.

“I need a guy like Conor,” Poirier said. “I need somebody that hypes the fight, makes people want to see it, then I go out there and beat him. It’s the perfect time for me in my career. I’m really mentally focused and I’m coming along as a fighter right now. I feel I’m hitting my stride and it couldn’t be better.

“Conor is a good athlete. He’s quick and a good counterpuncher, but he has a lack of experience fighting good fighters like myself.  That’s going to be on display on September 27.  I am going to be cool, calm and collected and I’m going to take him out.”