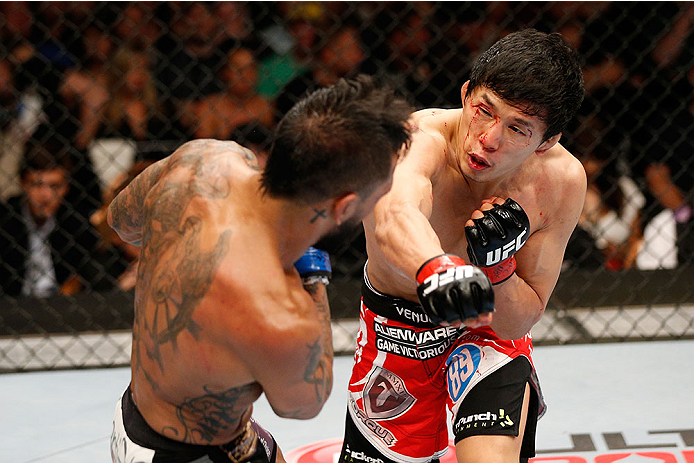 The UFC 178 preliminary card features one of the best headliners in recent memory, as former bantamweight champion Dominick Cruz returns to the Octagon for the first time in nearly three years after having two major knee surgeries that put him out of the sport and forced him to surrender his title.

At one time, Cruz was considered one of the top five pound-for-pound fighters on the planet, but in his absence Renan Barao became the new dominant force before T.J. Dillashaw erupted on the scene.  Now Cruz has to fight his way back to the title and it starts at UFC 178 against No. 5 ranked bantamweight Takeya Mizuaki.

Also fighting on the prelims, underrated lightweight contender Jorge Masvidal looks for his third win in a row and fifth overall since joining the UFC when he takes on James Krause.  Striking fans are in for a treat as well when prolific knockout artist Patrick Cote takes on karate's “Wonderboy,” Stephen Thompson.

In today's fantasy preview, we'll look at this unbelievable preliminary card to see who will walk away on Saturday night with a win and maybe even a finish to boot.

Despite his long absence from the sport, Dominick Cruz still demands respect, as witnessed by his favorite status going into the fight with Takeya Mizugaki on Saturday night.

The questions surrounding Cruz have nothing to do with skills - it's just a matter of his knee coming back 100 percent, especially with the former champion's favorite weapon being his tremendous footwork.  Cruz was so fast and elusive on the feet that he had just under 77 percent defense standing and every single fight he had in the UFC was a title bout.  That means he only faced the best of the best of the best.  And they still couldn't hit him.  Cruz counters with a fast-paced boxing attack and a well-timed wrestling game where he puts opponents down 3.79 times per fight.  Cruz is also nearly impossible to put down, much less keep down.

Mizugaki will certainly test Cruz in this fight.  He actually out strikes Cruz on the feet just slightly with his output per minute although his defense is woefully lower than that of the former bantamweight champion.  Mizugaki has ground statistics on his record, but chances are unless he slips into a desperate moment, he'll probably keep this fight standing for the most part.

On paper, Cruz should overwhelm Mizugaki with strikes on the feet while either tossing him to the ground occasionally or shrugging off whatever takedowns his opponent may attempt.  It's all predicated on Cruz coming back and looking the same as he did when he left three years ago.  It's risky to bet on that kind of a layoff for any athlete, but Cruz has a work ethic and determination few can match in the entire sport. It's doubtful he would return now without being fully prepared.  Look for Cruz to possibly come out of the gates a little slow, but once he gets his rhythm he'll pick Mizugaki apart and he should sweep the judges' scorecards for a decision win in the end.

The lightweight division is definitely a shark pit, but Jorge Masvidal knows how to navigate those waters better than most.  It seems almost criminal that he just can't seem to find a spot in the top 15, but there's little doubt Masvidal has the ability to go toe-to-toe with anybody in the division.

Lately, Masvidal has started to really come into his own with a dynamic striking attack mixed with an underrated wrestling game.  Masvidal is also one of the toughest fighters in the UFC although he actually doesn't take much damage in his fights with his 74.2 percent defense.  Masvidal feeds his opponents a steady diet of strikes (3.85 per minute) and takedowns (2.68 per fight).  Masvidal is the classic 'Jack of all trades,' meaning he's not great anywhere, but he's really good everywhere.

His opponent, James Krause, is still a bit of an anomaly in his UFC career.  He started out great with a surprise submission win over Sam Stout, but then his next fight ended in controversy as he lost to Bobby Green by body kick knockout although Krause claimed it was a low blow.  He came back and beat former WEC champion Jamie Varner, but it's no secret that Krause's opponent snapped his ankle early in the fight and fought on one leg until the end of the first round, when the bout was stopped.

Krause is primarily a striker with long reach and good pop in his punches and kicks.  He lands over four strikes per minute and hits with just under 45 percent accuracy.  Still, he's never faced a monster like Masvidal, and this will certainly be a big test for Krause.  The biggest test for Masvidal in this fight is getting inside on Krause, but that shouldn't create too many problems for this battle-tested veteran.

Masvidal will pursue Krause until he either starts putting together combinations to hurt him on the feet or he'll throw in a takedown to put his opponent on his back as he starts working for submissions.  Nobody beats up Masvidal, and even in his losses he gives just as much as he gets.  It's hard to anticipate Krause giving Masvidal anything he can't handle and dish back out three fold.  Masvidal should win this one going away, although Krause is tough enough to potentially drag it out to a decision.

There's a good chance a knockout will happen in the bout between Patrick Cote and Stephen “Wonderboy” Thompson given the kind of striking these two welterweights possess.

Cote is well-known for his boxing, and he was a title contender at middleweight before finally dropping down to 170 pounds.  He's been undefeated thus far in his new division, with his most recent win coming over fellow Ultimate Fighter coach Kyle Noke back in April.  Cote can deliver a big knockout punch, but can also absorb some serious damage, which could cost him in a decision but it also allows him time to fight back even in the worst of situations.  He may have to battle back a lot in this fight against Thompson unless he can figure out a way to keep this fight either in the clinch or on the mat.

Thompson is one of the most creative and dangerous strikers in the UFC.  His karate and kickboxing background made him a top prospect for years, but now that he's got a few fights under his belt in the UFC, Thompson is really starting to come into his own. He lands nearly five strikes per minute with over 50 percent accuracy, and he can come after an opponent from anywhere at any time from any angle.  Thompson is best known for his kicking game, but don't underestimate his hands because he's got plenty of power there as well.

Cote found a way to win in his last fight against Noke by putting the Australian down on the ground enough times where he became tentative on the feet just waiting for the takedown to come.  Cote will have to employ a similar strategy to throw Thompson off his game if he wants to win this fight.  Otherwise, Thompson at range and distance will absolutely pick Cote apart from the outside.  Thompson appears destined for a spot in the welterweight top 15 and this might be his last test before getting a matchup that will put him in the rankings.  If he can drop and finish Cote like he has his last two opponents, the welterweights will be on notice that “Wonderboy” has not only arrived, but that he's ready to tackle the best of the best in the division.

Following a long stint at 145 pounds, Manny Gamburyan makes the drop to bantamweight at UFC 178 against Cody Gibson, who is fresh off a knockout win over Johnny Bedford in his last fight.

Gamburyan was a contender at one time in the featherweight division, but he's struggled against the best fighters he's faced since competing for the belt.  Gamburyan's best showings have come when he's willing to slow the pace and grind on his opponents for 15 consecutive minutes.  It doesn't make for a crowd pleaser, but it usually gets him the win.  He averages over three takedowns per fight, and his clinch work against the cage is powerful and can be overwhelming if he stays in control.

Gibson has been a fun addition to the division since debut two fights ago.  He lost in his debut against Aljamain Sterling, but he took the fight on short notice and still gave the Team Serra-Longo fighter a tough go for three rounds.  Gibson not only possesses knockout power, but he also wields an underrated submission game and he's faced some very good competition throughout his career at bantamweight.

Based on history alone, Gamburyan should win the fight with his superior cage control and takedowns, but there remains a big question mark about how he'll deal with the weight cut, and lately, the former Ultimate Fighter runner-up just hasn't looked ultra confident in the Octagon.  If he shows an ounce of fear or intimidation, Gibson will take full advantage and crack him with the combinations to put him on the defensive for the majority of the fight.

If Gibson gets Gamburyan backing up and can avoid his clinch game, he'll win this fight by decision and pick up a big win on his resume.