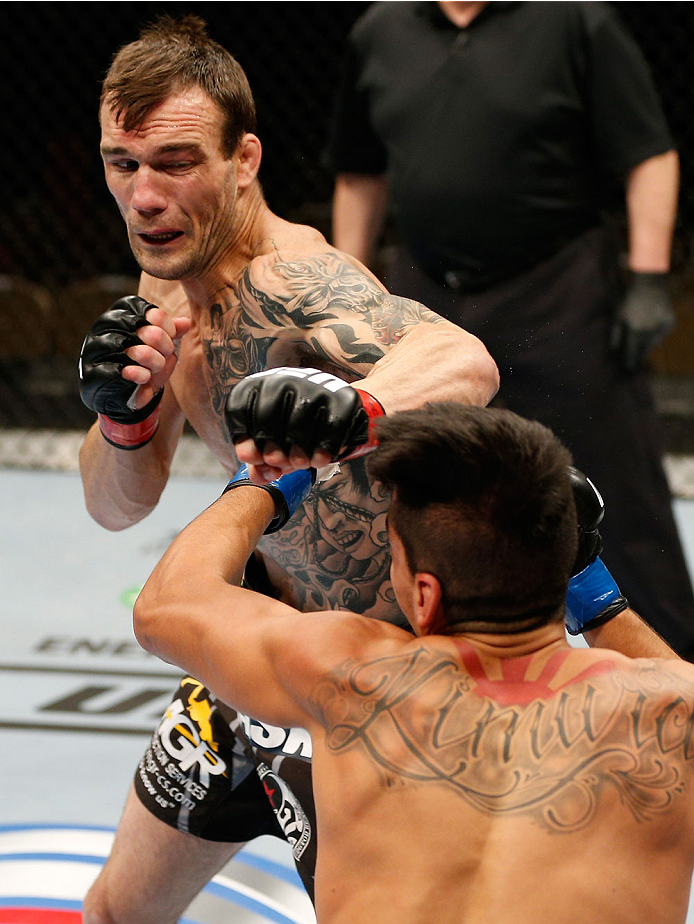 When UFC 175 lands in Las Vegas on Saturday night, the main card will get a lot of attention, but the preliminary portion of the show has a number of good fights as well, including former WEC champion Urijah Faber headlining the show against former Ultimate Fighter hopeful Alex “Bruce Leeroy” Caceres.

It's actually an Ultimate Fighter showcase in the prelims because four more TUF veterans will also compete on the card, including Chris Camozzi looking to take out Bruno Santos while George Roop hopes to give a rude welcome to newcomer Rob Font.

In today's fantasy preview, it's the preliminary card going under the microscope as we give some picks, predictions and breakdowns to hopefully up the point totals and move you one step closer to victory.

If there is a lock on the entire UFC 175 fight card a lot of pundits might point at Ronda Rousey in the co-main event given the fact that she's a -1500 favorite in her bout against Alexis Davis, not to mention that she's undefeated and basically a wrecking machine since coming to the UFC.  That said, statistically the fighter with the best chance at coming out on top this weekend is former WEC champion Urijah Faber, who takes on Alex Caceres in the featured bout of the prelims.

Why is Faber so much of a lock to win?

Well, first and foremost, in his 37 career fights, Faber has never, ever lost in a non-title fight. Considering the level of talent the California native has been facing ever since he entered the sport, that's no small feat.  While he's had a rough going in title fights over the last few years, Faber has mauled virtually every other fighter he's taken on and Caceres might just be the next victim on his hit list.  Faber's striking has continued to get better under former coach Duane “Bang” Ludwig, and now he's got former welterweight contender Martin Kampmann in his corner, which is just another element to add to his already dangerous chemistry.

Faber's boxing sets up his submission game, which is relentless and unbelievably effective.  He's finished three of his last four wins by submission, and Caceres might just be next.

Caceres is a long, rangy fighter for the bantamweight division and he'll have about a four-inch reach advantage in this bout.  He lands four strikes per minute with 53.38 percent accuracy and he's very active on the ground, working his submission game as well.

Unfortunately, this is a huge step up in competition for Caceres and Faber isn't planning on giving up his top spot in the division to him.  Look for Faber to put pressure on Caceres early and once he smells blood, this one could be over in a hurry.  Faber finishing by submission in round one would probably be a safe bet as the former champion gets back on track after a rough loss in his last fight to former bantamweight champ Renan Barao.

Chris Camozzi will look to turn around a recent two-fight losing streak when he takes on Bruno Santos, who experienced the first defeat of his career in his Octagon debut.

Camozzi will come into this fight with a few advantages that should play to his favor to help him get the win.  Right out of the gate, Camozzi will hold a whopping six-inch height and reach advantage over Santos, which, given his long striking style with jabs and kicks, plays right into his favor.  Camozzi lands nearly four strikes per minute and he mixes things up well with boxing and kickboxing to hurt his opponents.

The other factor that bodes well for Camozzi is Santos' lack of finishing power either on the ground or on the feet.  In his 13 career wins, Santos has only put away two opponents and both of those came in his first three pro fights.  Since that time, Santos has found a lot of success, but every win has come by decision, and as he faces a tough, durable striker like Camozzi, it could amount to a lot of punches taken over three rounds until the judges render a decision.

So as long as Camozzi can keep Santos on the end of his punches and kicks, he should cruise to a three-round decision victory.

UFC and Ultimate Fighter veteran George Roop will welcome Octagon rookie Rob Font to the cage this weekend in an interesting matchup in the bantamweight division.

Font may be a novice when it comes to UFC experience, but he's a veteran of the regional fight scene and trains out of Team Sityodtong in Boston under head trainer Mark Dellagrote.  Font is an aggressive kickboxer with solid, fundamental striking on the feet.  Font also possesses good defensive wrestling, but everything he does is to set up his striking attacks, so if he gets stuck on the ground in a bad spot, he's a bit untested in that area.

On the other side of the Octagon, Roop is a real veteran of this division with a nasty array of strikes and submissions.  At 6'1" while fighting at bantamweight, Roop already carries an advantage into almost every fight he has in the Octagon, and he's a fighter who knows how to use the reach he possesses to his advantage.  Roop's striking isn't off the charts statistically, where he lands 3.44 significant blows per minute with only 33.69 percent accuracy, but when he connects he makes it count.  Roop has finished off opponents like Chan Sung Jung and Brian Bowles with his strikes and Font has to be careful or he could be the latest knockout on his record.

Experience is also a key in this one because Roop has been there, done that when it comes to the Octagon, and Font will be dealing with the infamous first-time UFC jitters so many fighters struggle to overcome.  Roop only seems to lose to the absolute best fighters in the division, whether he's competing at featherweight or bantamweight, so chances are once he warms up, he's going to lay Font out before the final horn sounds. This fight shouldn't see the judges' scorecards if Roop can amp up the pressure and then turn the lights out on Font.

Former Ultimate Fighter Brazil fighter and Team Sonnen member Guilherme Vasconcelos will more than likely be called “Bomba” throughout his UFC career so get used to it now as he makes his debut against Ohio native Luke Zachrich, who will be making his second appearance inside the Octagon.

Bomba is a Brazilian Jiu-Jitsu black belt with a developing striking game as well.  While his record is only 3-1 thus far in his young career, Bomba has faced some fierce competition for a newcomer, and his experience on The Ultimate Fighter only helped in his evolution for a future in the Octagon.  Bomba lost by decision in his quarterfinal round matchup against Ricardo Abreu, but he was battling for every position and gave the early favorite in the competition everything he could handle.

Zachrich is a more well-rounded fighter than Bomba, especially if he can slow down the pace of this fight and work into his boxing rhythm.  While Zachrich is no slouch on the ground, he has to know Bomba wants this one on the mat, so stuffing takedowns and playing a smart defensive wrestling game is a much better strategy for this fight.  Zachrich needs to show patience and wear Bomba down round after round if he wants to walk out a winner.

That said, Bomba is a real prodigy and he's had the last few months to polish his craft as he approaches his UFC debut.  If nerves don't get the best of him, this young Brazilian product has the kickboxing game to give Zachrich headaches from the outside, which could, in turn, force him to look for the takedown, which is exactly what Bomba wants.  On the ground, Bomba won't have an easy time getting a submission on Zachrich, but an aggressive attack from the top should secure him the win and a solid introduction to the UFC's middleweight division.