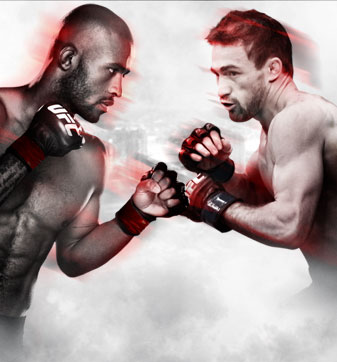 The UFC will make its long awaited return to Vancouver this weekend as flyweight champion Demetrious Johnson looks to continue his reign of terror over the 125-pound division when he takes on Dagestani fighter Ali Bagautinov in the main event, while hometown favorite Rory MacDonald will try to take another step in his quest to earn a welterweight title shot as he faces Tyron Woodley in the co-main event.

UFC 174 will also showcase the return of former heavyweight champion Andrei Arlovski as he fights inside the Octagon for the first time in over six years when he takes on Ultimate Fighter season 10 runner-up Brendan Schaub.

All told, UFC 174 has a stacked main card, and in today's fantasy preview we're going to preview four of the best fights, including the headline bout between Johnson and Bagautinov.

It's hard to pick against flyweight champion Demetrious Johnson given the current run he's on in the division.  He's the only person to hold the gold since the weight class was introduced two years ago, and he is only getting better with every performance. He finished John Moraga in the fifth round via submission and then knocked out Joseph Benavidez in just over two minutes of the first round in his last fight.

Johnson has the most takedowns in the UFC since 2011 with 40, while also landing 443 significant strikes, which accounts for the most in the history of the flyweight division.  He also just happens to be the fastest fighter that's ever stepped foot in the Octagon in both hand speed and footwork.  One of Johnson's most overlooked attributes might actually be his defense because he's not only fast when hitting an opponent, but he's usually out of there before they even have a chance to counter.

If Bagautinov wants to have a chance to win this fight he has to do one of two things - either find a way to slow Johnson down, and that means clinch work and pressing him against the cage, or find a way to get him on the mat and keep him there.  Both are extremely hard - just ask every other flyweight that's faced him thus far in the UFC.

Bagautinov does land 3.45 takedowns per 15 minutes, so he's capable of a strong wrestling attack, and coming from the same area that produced Sambo specialists like Khabib Nurmagomedov and Rustam Khabilov, he's also powerful and can throw an opponent like a sack of potatoes if they allow him the time and space.

Still, there's no doubt Bagautinov is climbing uphill in this fight.

Johnson is faster in his exchanges, quicker to get in for a takedown and his defensive footwork is out of this world.  That says nothing for the fact that Johnson has gone five rounds before and Bagautinov has never even seen the fourth since coming to the UFC.  Johnson is really hitting his stride right now, quietly building a winning streak and title defenses while the rest of the world pounds the desk talking about Jose Aldo and Jon Jones.  Johnson's variations on the feet and the ground will give Bagautinov nightmares by the time the third and fourth rounds come into play, and it should give the champion the opening necessary to go up on the scorecards and potentially land the fight-ending strikes to get the TKO victory.

It's as even as even can get in the co-main event when two top 10 welterweights battle it out with the winner taking a decided step forward towards an eventual title shot against champion Johny Hendricks.

Rory MacDonald has been one of the most efficient fighters in the division over the last couple of years as he continues to improve his striking while mixing in an effective ground attack when necessary.  Lately, MacDonald has preferred to use his long jab and range to stay on the outside of opponents and continuously pop them in the mush while putting together combinations to do maximum damage.  He has the fourth highest striking rate among welterweights, landing just over four significant strikes per minute, and he counters his opponent's offense with great takedown accuracy while also blocking 88.4 percent of the attempts against him.

On the other side of the cage, Woodley is a wrestler turned power puncher with dynamite stored in both hands.  What he lacks in technical proficiency on the feet he more than makes up for with the kind of knockouts that can alter reality.  As a former college wrestler from Missouri, Woodley won most of his early fights with takedowns and a dominant top game.  Since coming to the UFC, Woodley has adjusted to a more boxing-based attack while stuffing 94.1 percent of the takedowns attempted against him.  He's also nasty in the clinch, using his broad shoulders to hammer an opponent to the fence like he's got hammers in both arms and then nailing them with punches on the inside.

This fight really comes down to control, and if it stays standing can MacDonald stick to his outside boxing game while keeping away from Woodley's power?  That's what we're betting on considering MacDonald's footwork and quickness.  He just needs to avoid Woodley's takedowns and clinch game early, and then he can spend the next 15 minutes jabbing the former Strikeforce contender until welts start appearing on his face.

MacDonald has shown conditioning issues in the past, but so has Woodley, so they break even there, but if one of them has improved dramatically since preparing for this fight, that could make all the difference. Still, MacDonald should remain the favorite to eke this out by unanimous decision once he makes it through a dangerous first round.

Well, Feijao is a really deadly fighter, especially in the early going of his fights.  In Feijao's 12 career wins, all of them have come by knockout or TKO and it's usually in the first or second round.  Feijao throws heat with every strike he launches at an opponent, but he's not wild with his attacks.  He lands with 56.5 percent accuracy, which is a great number for any light heavyweight, and he also throws with volume, landing nearly four significant strikes per minute.  Because he fires his offense with such ferocity, Feijao has been known to fade in fights as well and that's where this first round becomes awfully interesting.

Bader isn't a stranger to knockouts either, with three KO finishes in the UFC, not to mention a three round bludgeoning of Anthony Perosh in his last fight.  Bader is also a great wrestler while averaging just over three takedowns per 15 minutes, and it would probably serve him well to drag this to the mat early to start zapping Feijao's energy before he can get any kind of momentum going.  It also has to be noted that outside of a surprise upset loss to Tito Ortiz at UFC 132, Bader's defeats in the UFC have only come to the best of the best - Jon Jones, Lyoto Machida and Glover Teixeira (and he was very close to winning the last fight).

While the idea of a vicious Feijao knockout always looms large, if Bader plays his cards right and mixes up his wrestling and boxing he should be able to wear out the Brazilian and by the end of the third round he should be up on the scorecards.  He has to be careful early, but assuming Bader is smart in his strategy, he'll find a way to get the win by decision.

Now those numbers are deceiving because while Schaub is technically the 'favorite', the odds makers have Arlovski rated as a -105, which means this is another painfully close fight heading into Saturday night.

Arlovski hasn't fought in the UFC in six years and there's no denying he's a different fighter than when he left.  His style remains the same - fast hands, counter wrestling and good kicks - but he's also a slight bit slower than he once was and his chin has taken a lot of hits over the years, including a broken jaw suffered in his fight against Anthony Johnson in 2013. Arlovski has won six out of his last eight fights, but the level of competition isn't exactly UFC caliber.

Meanwhile, Brendan Schaub has quietly become a heavyweight on the rise again after suffering back-to-back losses to Antonio Rodrigo Nogueira and Ben Rothwell.  The biggest change for Schaub has been his wrestling game honed under former NCAA champion Mark Munoz and his jiu-jitsu under the tutelage of Ryron and Rener Gracie.  In his last two fights, Schaub has been a takedown machine, with just under 56 percent accuracy, and he picked up his first submission win over Matt Mitrione via D'arce choke.  Now the confidence is brimming in Schaub, which is exactly what happened the last time he faced a legend of the Octagon and that night ended with him slumped over on his knees as Antonio Rodrigo Nogueira celebrated a knockout win.

Schaub has trained with Arlovski in the past so he knows the power, reach and quickness of the Belarus native, but they've obviously been facing much different fighters over the last few years with one in the UFC and one not.  The odds are close, but if Schaub is tactical with his attacks and doesn't get into any big exchanges with Arlovski, he should be able to punish the former champion with punches and kicks just like he did Mirko Cro Cop in their 2011 fight. Couple that with his rapidly improving wrestling game and this is Schaub's fight to lose.  Knowing how much respect he has for Arlovski, the safe bet is to assume this will go to decision just based on Schaub not over committing to anything out of fear of the counter strike, but overall he should control the pace and best the former champion on the feet and on the ground to get the win.