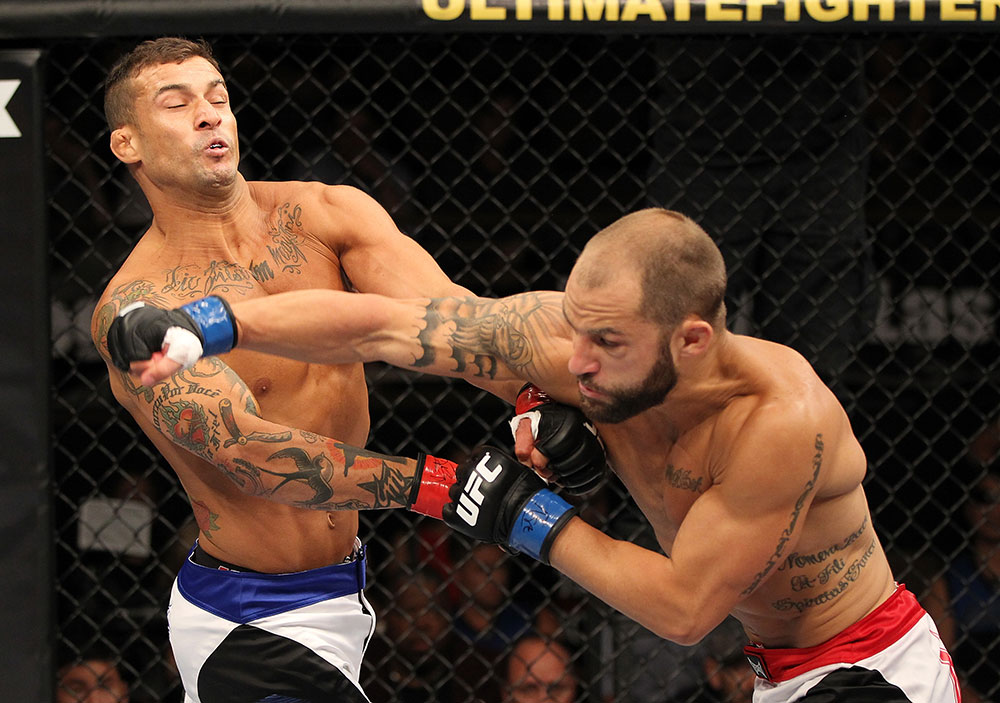 This weekend’s UFC 173 event not only showcases some of the best fighters in the world on the main card, but the preliminary bouts are stacked with top up and comers, including three Ultimate Fighter champions all looking for wins on Saturday night.

With a 3-1 record since exiting the reality show, Michael Chiesa has remained one of the sport’s best prospects in the lightweight division and he'll look to add another win to his record when he faces Brazilian Francisco Trinaldo.  Season 13 winner Tony Ferguson will look to pick up his second win in a row when he returns to action against Katsunori Kikuno while most recent Ultimate Fighter winner Chris Holdsworth tries to improve his already stellar finishing streak when he takes on Chico Camus.

All told, the UFC 173 preliminary card is stacked with talent, and in today's preview we're going to examine some of the top matchups to see who has the best shot of coming out on top in the upcoming UFC Pick ‘Em game.

Michael Chiesa faces Francisco Trinaldo in the featured bout on the preliminary card, and these two are both submission specialists so don't be surprised if this is a ground battle as both fighters fish for a finish.

Chiesa won't fool anybody with his striking, considering he lands a paltry 1.67 strikes per minute with just 32.85 percent accuracy, but when he's throwing anything, the purpose is usually to set up his takedown and mat work.  Chiesa lands nearly three takedowns per fight and almost the same exact average for his submission rate.  It's the reason why he's put away all of the opponents in his three wins via submission.

Trinaldo isn't going to be easy to put away considering his own jiu-jitsu background, including two wins in the UFC via arm triangle chokes.  If he gets on top and can lock on the right hold, Trinaldo is very dangerous with his own submission game.  Still, given Chiesa's grappling pedigree and wrestling talent, chances are he'll be forcing the takedown and looking for submissions as soon as they hit the mat.

Trinaldo is talented enough to stave off most attempts, so chances are Chiesa will have to work for a unanimous decision win, but he should get the victory.

Following a long layoff due to injury, Tony Ferguson returned to form in his last fight, where he submitted former Ultimate Fighter competitor Mike Rio in the first round of their matchup last October.  Ferguson continues to be a solid prospect since winning the reality show a few years back, and with a renewed vigor and healthy body, he's a threat to anyone at 155 pounds.

Ferguson is a wrestler at heart, and while in the UFC he's only averaging about one takedown per 15 minutes, he lands at 60 percent accuracy, so chances are if he wants this on the ground, he can get it there. Hitting his opponents four times per minute with significant strikes is where Ferguson has been most dangerous, but his ability to mix things up with an excellent ground base keeps other fighters guessing and that's to his advantage.

Katsunori Kikuno is no pushover, however, and with nearly 30 fights on his record this won't be his first rodeo.  Kikuno is well-rounded in all aspects of his game, but primarily he is known as a striker, with knockouts being his preferred method of finishing a fight.  Statistically speaking, Kikuno's one UFC fight isn't a good enough gauge to know what he's capable of doing, but looking at his past record, it's clear that he'll want to keep this fight standing for his best chance at victory.

Ferguson just needs to approach this fight smart and not get caught up in any wild exchanges where Kikuno could take advantage and he should slip by with a victory.  Ferguson has the ground skills to frustrate Kikuno on the mat if he chooses, and on the feet both fighters are fairly even with power and technique.  Ultimately, if Ferguson varies his attacks and makes Kikuno question where this fight is going, he'll take over with a dominant decision win.

Based on the performances we've seen of him thus far, Chris Holdsworth might just be the brightest prospect to come out of The Ultimate Fighter since Rashad Evans stormed his way to light heavyweight dominance following season two of the show.  Holdsworth is a rare breed of fighter with lightning fast hands and a submission game that's earned him an undefeated record where he's finished every single fight in his career.

Holdsworth won't have an easy test in front of him in his first post-TUF bout though, with veteran fighter Chico Camus standing in front of him this weekend in Las Vegas.  Camus is a tough, gritty bantamweight with a solid overall game, but it might not be enough to slow down Holdsworth, as he hopes to one day conquer the top 10 of the division.

Holdsworth explodes out of the gates with a long, lanky frame where he'll hold a whopping five-inch reach advantage over Camus, not to mention world-class submissions.  Training out of Team Alpha Male in Sacramento, Holdsworth has worked tirelessly on his wrestling, and with coach Duane Ludwig, he's added better striking as well.

Look for Holdsworth to use his reach to pop Camus early and force the fight to hit the ground.  Once there it's Holdsworth's world and Camus is just living in it.  Expect the last Ultimate Fighter winner to come out with a win via submission yet again, putting Camus away within the first two rounds.

The bout between Sam Sicilia and Aaron Phillips could be a sleeper Fight of the Night pick once it's all said and done.  Sicilia is an exciting brawler who loves a good knockout and Phillips, while a newcomer to the UFC, is well versed in Muay Thai and kickboxing.

Phillips is the more technical fighter in this matchup, as he puts together good kicks and punches throughout a three round bout, but with this being his first fight in the UFC on short notice, he's got a long road to walk facing someone like Sicilia.

While his record in the UFC doesn't speak volumes, former Ultimate Fighter competitor Sam Sicilia is as tough as they come and he carries two bricks in his hands when punching an opponent in the face.  Sicilia won't blow you away with how fancy he is with his stand-up.  He's a meat and potatoes fighter that can drop a left-right combination like a sledgehammer pounding away at an opponent's head.

It's here that Sicilia should win the fight.  He has a favorable matchup with Phillips coming into this bout as the novice and taking this bout on short notice.  In the long run, Phillips could still be a fighter to watch, but stylistically this is not the best matchup he could have gotten for his debut.  Sicilia comes out of the gate hard and he hits even harder.  If he connects in rounds one or two, Sicilia could get the knockout, but it's going to be an exciting few minutes as these two will throw everything and the kitchen sink at each other.