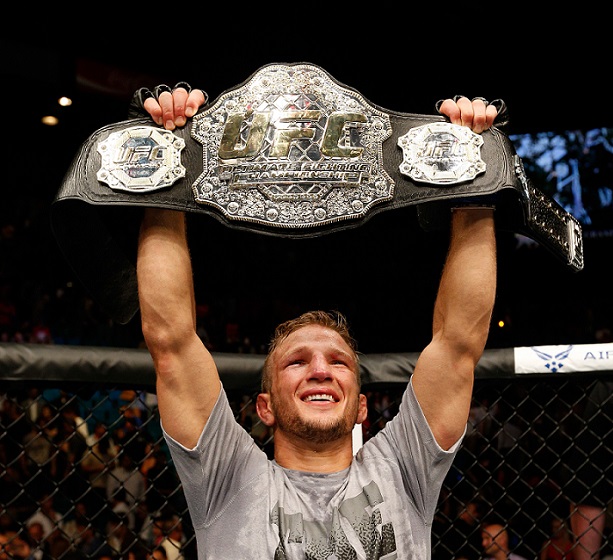 THE CHAMP IS HERE

It’s only the morning after TJ Dillashaw’s win over Renan Barao for the UFC bantamweight title, and I think we’ve already run out of superlatives for his performance. Perfect, amazing, remarkable, thrilling, masterful, etc, etc. And yes, this world is guilty of overdoing things, but in this case, anything positive you can say about the new champion’s effort is right on target.

It was a master class against a master of the sport, and if you’re looking for an example of a fighter who put it all together on the most important night of his life, this is it. From the time he walked from the locker room, Dillashaw looked like he was going out for a Memorial Day BBQ, and his ease under the lights never faltered.

He would raise his hands after a strong round, look out into the crowd to seemingly take it all in between rounds, and during those rounds, he showed no fear as he executed an airtight game plan. The funny thing is, you have to look at that effort and wonder who is going to beat him.

Yes, I know, it’s the same thing we’ve said about Anderson Silva, Jose Aldo, Cain Velasquez, Georges St-Pierre, Jon Jones, and so on and so on. But hey, isn’t that the fun of this game, that on one night, someone can simply look indestructible. Right now, TJ Dillashaw is that man. 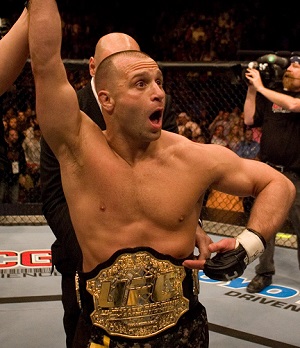 When he defeated Georges St-Pierre in their first fight, no one gave him a shot of winning. In Dillashaw-Barao, while few picked Dillashaw to win, almost everyone conceded that it was going to be a competitive fight. It turned into much more than that, and while it will own a spot on the greatest upsets list, I’ve got to stick with Serra-GSP I as THE greatest.

Raphael Assuncao seems to be the likely frontrunner for a shot at Dillashaw, and I can see that happening for two main reasons. A) He has a six fight winning streak, so he earned it. B) He’s the last man to beat Dillashaw (and in a Fight of the Night, no less), so there’s a great storyline there as well.

But if the fight doesn’t happen right away, I wouldn’t mind seeing Takeya Mizugaki tossed in the mix. The Japanese contender’s winning streak is impressive as well at five, and after his UFC 173 win over Francisco Rivera, momentum is his friend. 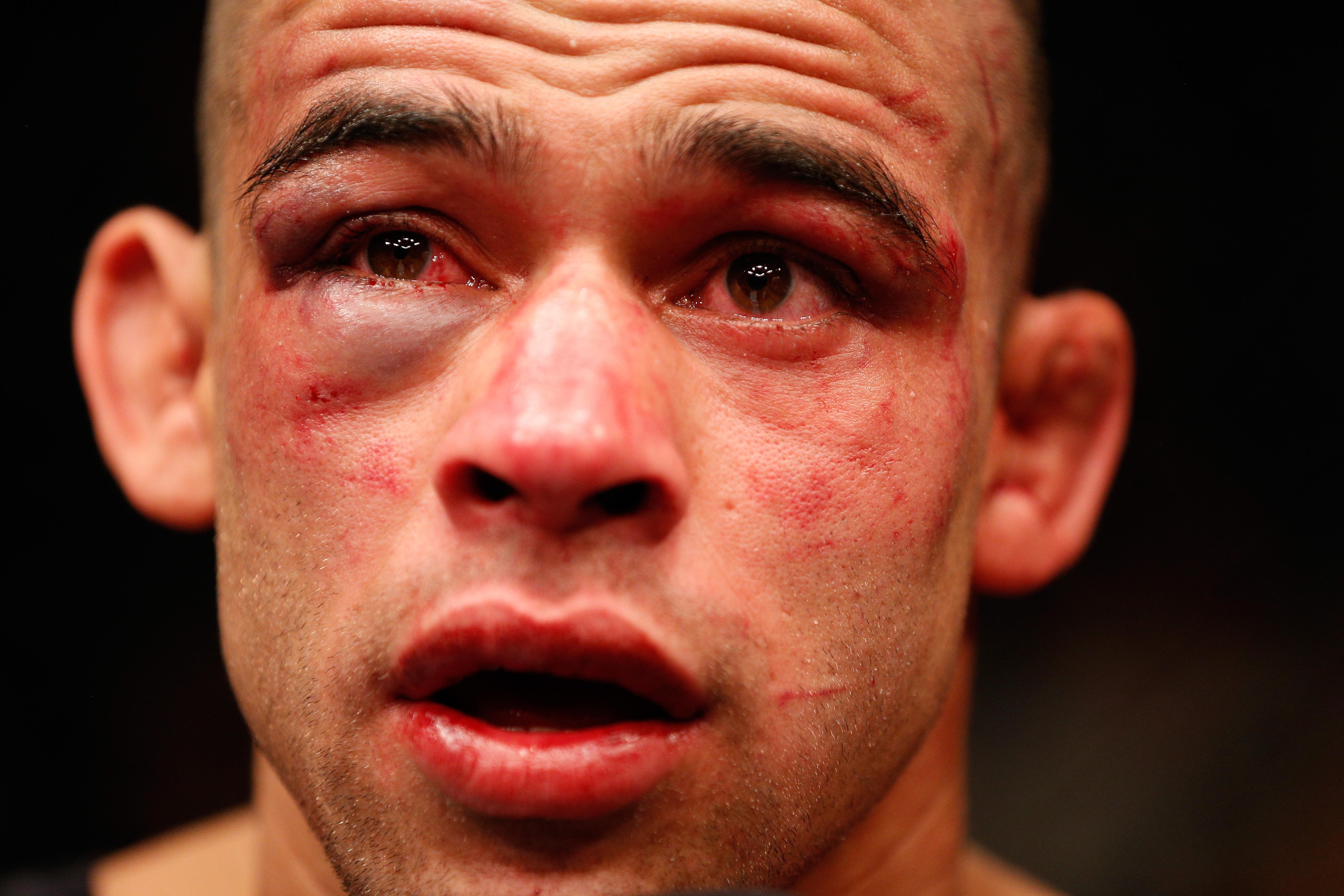 News flash – Renan Barao is human. News flash 2 – despite losing, he’s still as good as we all thought he was. Yes, everyone loses in this sport, and while few expected Barao to taste defeat for only the second time since 2005, it happens.

This doesn’t put a question mark over his 22-fight winning streak or 35-fight unbeaten streak, one of the great runs in mixed martial arts history. He just lost to the better man last night. It’s as simple as that. I do have a couple observations from Barao’s loss though.

After getting dropped hard in the first round, most thought Barao was done, so full props to him for getting up and making it into the fifth round. But I wonder if he even remembers anything after that first round because it looked like he was running on instinct from there.

He has a jiu-jitsu black belt, so why not shoot for a takedown and take your chances there, especially when getting lit up on the feet? And while his spinning back kick has paid off big for him in the past, it just wasn’t on last night, but he kept throwing it. So if this knockdown doesn’t occur in round one, is this a different fight?

Only a rematch will answer that question. For now, it’s a lot of what ifs for the Nova Uniao ace. 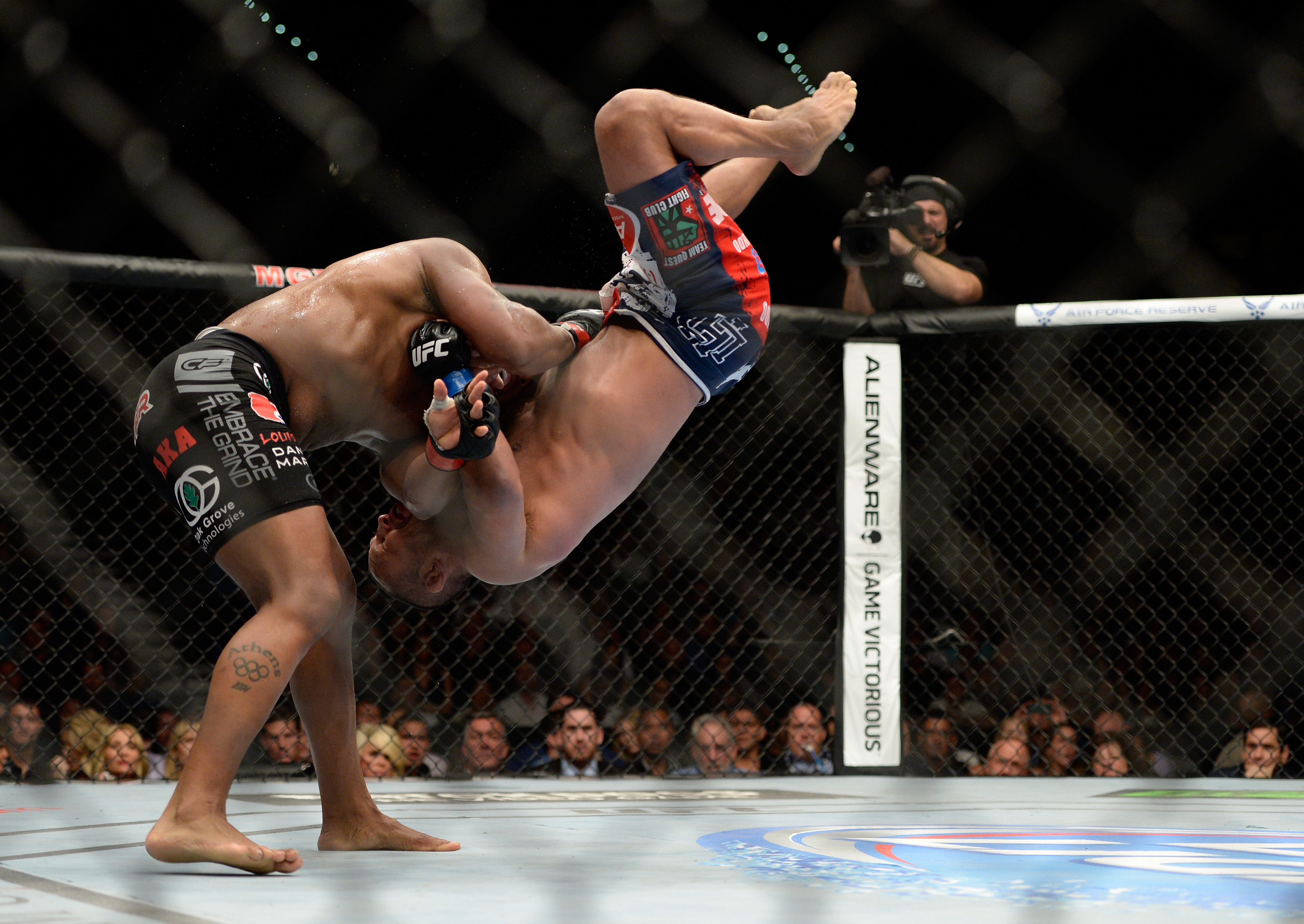 Daniel Cormier" alt="Daniel Cormier" style="width: 300px; height: 212px;">I know Dan Henderson was the sentimental favorite at the MGM Grand Garden Arena last night, and as a 45-year-old I can understand such feelings, but how could anyone outside of Hendo’s immediate circle possibly boo Daniel Cormier’s performance in the UFC 173 co-main event.

I’ve followed Cormier’s career from the start, and outside of his knockout of Bigfoot Silva, I think this was clearly his best performance. He told me before the fight that if he got the chance, he wanted to outwrestle Henderson, and he did just that. The funny thing is, 205-pound champ Jon Jones has always made it known to me that if he’s fighting a wrestler with more credentials than he has, he wants to prove that he’s the better matsman.

You see where I’m going here? Cormier vs. Jones, if it happens, could not just be a great fight, but a clash of egos with each fighter eager to prove that when it comes to wrestling, he’s the better man. Let’s hope this fight happens, because it’s going to be one to remember, and I believe DC is ready for it once Jones settles his business with Alexander Gustafsson.

STILL RUTHLESS AFTER ALL THESE YEARS 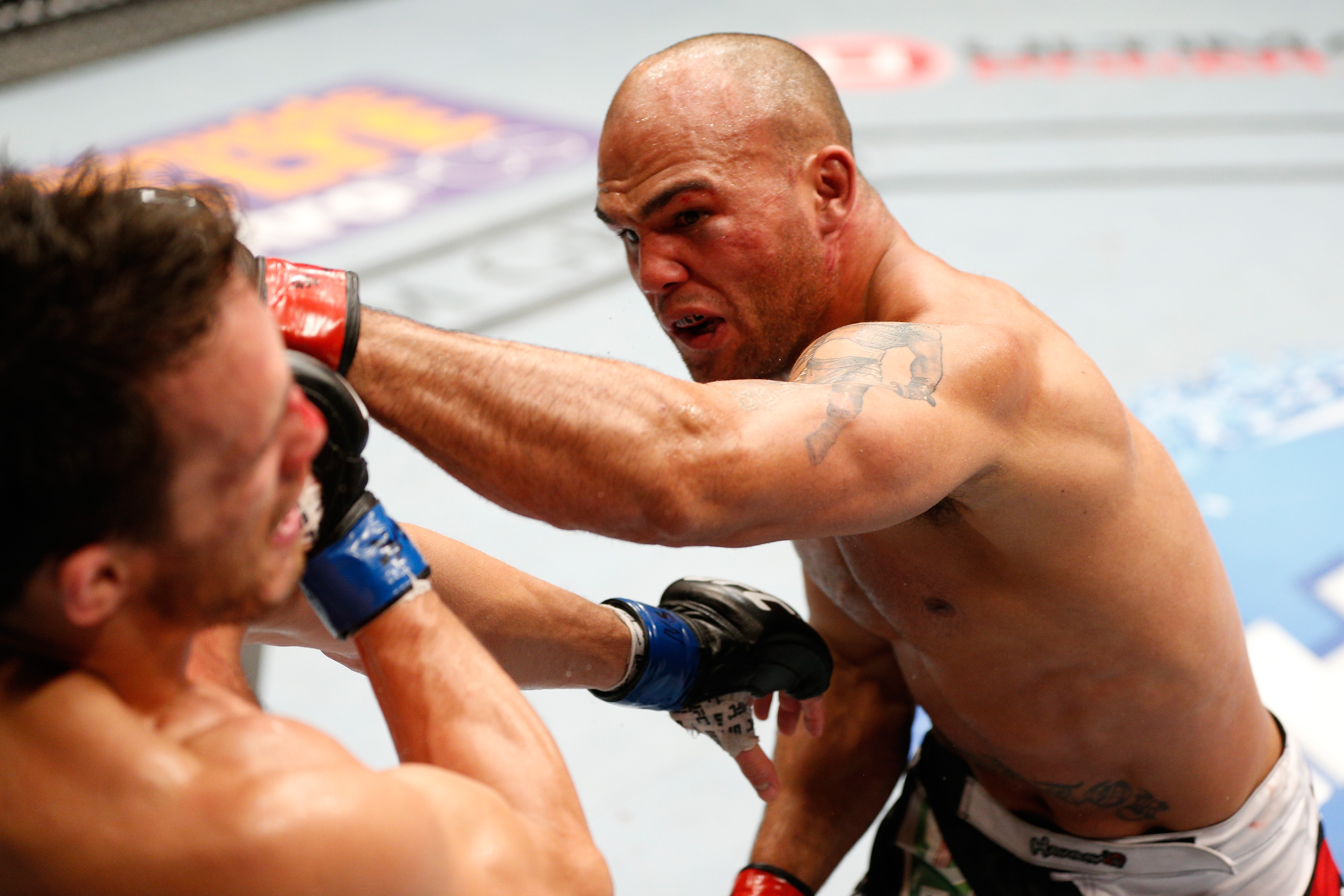 Robbie Lawler" alt="Robbie Lawler">Is there anything better than a Robbie Lawler fight these days? I know the career resurgence angle has been discussed to death over the last year, but it’s hard to avoid it when you watch him in the Octagon these days.

He looks like he’s legitimately having fun in there, and his form of fun is not fun for the guys participating in it with him (three funs in one sentence – now that’s a helluva lot of fun. And two more). Jake Ellenberger just couldn’t get his offense together Saturday night, even though he gamely went for broke at the start of the third round, and Lawler never seemed troubled by anything “The Juggernaut” had for him.

Plus, in a contrast to his fight with Johny Hendricks, Lawler was back to sitting down on his punches and avoiding the pitter-pat flurrying that marked a lot of his exchanges with “Bigg Rigg.” When Lawler swings for the finish with each shot, it’s not only fun to watch (there’s that fun thing again), it puts “Ruthless” on the short list of best 170-pounders in the world.

You’ve got to feel bad for James Krause. After a long wait to get to the UFC and a memorable double bonus-winning effort in his Octagon debut against Sam Stout, he’s had to go through a controversial loss to Bobby Green and a main card win over Jamie Varner that was shortened by an injury suffered by the former WEC champ.

Is Krause complaining about the win and the win bonus?

Not likely, but it just seemed that he was on top of his game and on his way to a career-defining victory when the plug was pulled. That means that there will still be skeptics who blame Varner’s loss on his injury and not on what Krause did in the fight. That’s unfortunate, because Krause is going to make some noise at 155 pounds

Speaking of noisemakers, the three TUF winners in action last night – Michael Chiesa, Tony Ferguson, and Chris Holdsworth – all made big impressions in victory, but in vastly different ways. Chiesa is clearly establishing himself as one of those guys that will find a way to win, no matter the circumstances.

He’s not flashy in there, but he gets the job done. In the process, he’s making himself someone top contenders may look at and think they can beat – at least until the fight starts. TUF 13 winner Ferguson may be the dark horse in the 155-pound weight class.

He’s got the right attitude, and he can either knock you out or submit you. His progress has been slowed by injuries, but if he stays busy, I can see him entering the title race by late next year. As for the third member of the trio, TUF 18’s Holdsworth got a solid win against a legitimate tough guy in Chico Camus, and the thing that impressed me about the Californian is that he was always looking for the finish, even when he had the fight wrapped up in the third round.

Add in a great back story and affable personality, and Holdsworth may have the right stuff to not just be a top fighter in this sport, but a star.

Calling yourself the next Bruce Lee is a bold statement, but when China’s Li Jingliang made it, I liked it. Too many fighters come to the UFC from countries outside of Europe and North America and we never really get a glimpse at their personalities.

Jingliang may break that mold with statements like the one he made after beating David Michaud, and the kid can fight a bit too – that never hurts, especially when you’re supplementing your work at home with training sessions in Las Vegas with the likes of Ricky Lundell and Jimmy Gifford…Vinc Pichel has taken a tough road to his two-fight winning streak in the UFC, and he may be finally erasing the memory of being suplexed repeatedly by Rustam Khabilov in his UFC debut in 2012. And what better way to do that than by taking a page out of Khabilov’s playbook in his win over Anthony Njokuani?

It was a good win for a fighter that worked hard for this moment…The same could be said for Mitch Clarke, who invests a lot, not just physically, but mentally and emotionally into this game, so to see him get a big win over Al Iaquinta was a positive shot in the arm for the Canadian. Clarke also won best entrance song of the night honors (unfortunately that’s just my opinion and there’s no bonus involved) for walking into the Octagon to the strains of Mountain’s “Mississippi Queen.”

Always wanted to hear Leslie West in an arena, and now I have…In the solid, yet unspectacular, category was Sam Sicilia, who won a hard-fought three rounder over Aaron Phillips. That’s not a knock on the TUF 15 alum either, it’s just that we’re used to him blasting people out standing.

So while showing off his ground attack was a good thing and a smart strategy, I admit that I want to see Sicilia throwing bombs. Sorry, I’m a Neanderthal…Good to see a few of my favorites in and around UFC 173, including Rumina Sato, TK Kohsaka, and Tim Credeur.