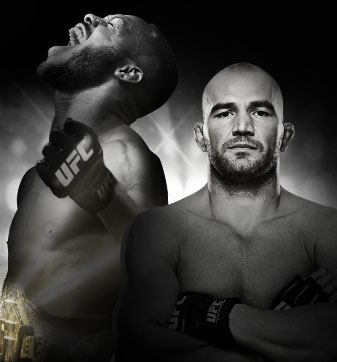 UFC light heavyweight champion Jon Jones will go into UFC 172 looking to extend his already record-setting run as the best 205-pound title holder of all-time when he faces Glover Teixeira in the main event of the UFC's first trip to Baltimore.

In addition to the main event, top five-ranked fighter Phil Davis will try to make a statement to the rest of the division when he faces the returning Anthony “Rumble” Johnson, who comes back to the UFC as a light heavyweight after stints at both welterweight and middleweight in his previous run in the Octagon.

Former Strikeforce champion Luke Rockhold also gets back in action when he goes for his second UFC win, as he faces Tim Boetsch in a middleweight contest on the card.

In today's fantasy preview, we'll take a look at the key matchups on the main card and see who has the advantages to land the most points come time for the final tally of the day.

Stylistically, this is going to be a tough fight for Glover Teixeira to win, given his tendencies in past fights.  Teixeira is known for his knockout power due to his ridiculous 6.91 significant strikes landed per minute with just under 48 percent accuracy.  But it can't be overlooked that Teixeira also likes to work in his wrestling during his fights as well, where he averages 4.78 takedowns per every 15 minutes he spends in the cage.

It's going to be tough work getting Jones to the mat, however, considering the champion has stuffed 23 out of 24 takedown attempts during his UFC career with the one exception coming during his fight with Alexander Gustafsson.  Even following the takedown, Jones suffered no real damage and worked back up to his feet, so that one moment didn't really have any kind of adverse effect on his overall performance.  On the other side of the coin, Jones is scary with his own wrestling and submission game.  Jones has 27 career takedowns with just over 50 percent accuracy, which accounts for the highest in the light heavyweight division.

Jones has also worked tirelessly on his striking game, where he lands at over 54 percent accuracy with four significant strikes landed per minute.  Couple that with his 65 percent striking defense, and Jones is not only good on his feet, he's also very solid at blocking his opponent's attacks.

Maybe the most telling sign of this title fight is Teixeira's inability to avoid damage in his recent UFC career.  While statistics tell us Teixeira blocks 68 percent of strikes attempted against him (a better average than Jones), the real story in the fights is much different.  Teixiera has been caught and wobbled on a few occasions in his UFC career, and has just been able to fire back at the other guy and land before they could take advantage.

Don't expect Teixeira to have as much luck in this one.  Jones is accurate on the feet, while also holding a two inch reach advantage in the fight.  Whether he wants to keep it standing and use his long kicks and rangy jab to force Teixeira into making a mistake, or if he just wants to get this to the ground and open up a barrage of elbows before slipping in a submission, Jones should win this fight within the first three rounds.  Teixeira is a game opponent, but Jones might be the best fighter on the planet right now and it's really hard to pick against him in this one.

The co-main event for UFC 172 pitting Phil Davis against Anthony Johnson might be one of the most intriguing matchups on the entire card.

Johnson hasn't been in the UFC for a couple years, but he's quietly built himself into a high-quality light heavyweight fighter. With big knockouts and quality wins over former heavyweight champion Andrei Arlovski and UFC veteran Mike Kyle, Johnson is just as dangerous now as he was when he patrolled the welterweight division for the better part of his career inside the Octagon.

His recent success might run into a brick wall come Saturday night, however, when he faces former NCAA champion Phil Davis.

Davis is a powerful wrestler with lightning quick takedowns who puts opponents down with just under 43 percent accuracy while averaging around three takedown attempts per fight. Davis has also worked on his striking, especially his kicks, which might be his most effective offensive weapon on the feet.  Davis also possess a very good submission game, and with the recent addition of coach Neal Melanson, who has worked with a who's who of top fighters in the past as a submission grappling coach, it's only going to serve to make him even better.

The key for Johnson to win this fight is to avoid takedowns and hurt Davis on the feet. The only problem is that Davis loves to use his kicks to set up boxing combinations, and considering the wrestling game his opponent possesses, that could negate that portion of his game altogether.  Throwing kicks means leaving himself open for a takedown and Davis would like nothing more than that.  It also can't be ignored that Johnson has slowed down a bit in fights that he doesn't finish early, so Davis needs to make sure to weather the storm in the first round or get him to the mat and grind things into the later rounds.

If Davis fights his game of wrestling mixed with a versatile kicking arsenal, he should get the win by decision. Don't discount Johnson's power either because he could stop Davis cold with one punch in the first round.

In one of the most lopsided fights according to the oddsmakers, former Strikeforce champion Luke Rockhold takes on Tim Boetsch in a matchup of top 15 middleweights.  While betting experts are often wrong when it comes to MMA due to the unpredictable nature of fighting, this seems to be one time where they are right on the money.

Rockhold is one of the most well-rounded fighters at 185 pounds, with an arsenal of strikes at his disposal, not to mention an underrated ground game where he picked up five submission victories while competing in Strikeforce.  The real power in Rockhold's game does come from his stand-up, however, where he lands nearly four significant strikes per minute with over 50 percent accuracy.  He's got a bevy of punches and kicks at his disposal, and when you couple that with better than average takedown defense, Rockhold is going to be a tough matchup for any fighter in the division.

Boetsch might have Rockhold matched in the toughness category, but his 57.7 percent striking defense, matched with a 35.3 percent accuracy in takedowns, make this an impossibly hard fight for him to win. Boetsch does very well when he can control the standup distance before closing in for a takedown of his own.  Given Rockhold's three-inch reach advantage, Boetsch is already going to have to work hard just to get inside, much less take this fight to the ground.

What's more likely to happen is Rockhold surviving any early onslaught from Boetsch and eventually picking him apart on the feet.  Watch out if Rockhold gets Boetsch trapped against the cage at any point because he's unrelenting when he smells blood in the water, and this could be his second TKO in a row if he plays smart and fights to his strengths.

An early pick for Fight of the Night could come from this featherweight matchup between Max Holloway and Andre Fili.

Holloway is a tall, rangy striker with devastating kicks and a solid, overall stand-up game that can give any fighter problems.  Fili is equally dangerous with his kickboxing, while also mixing in a solid wrestling game honed at Team Alpha Male in Sacramento alongside other UFC stalwarts like Urijah Faber and Chad Mendes.

Both of these fighters are capable of putting on an offensive onslaught like few in the division can.  Holloway lands strikes at nearly six per minute, while in Fili's one UFC fight he put together over nine significant strikes per minute.  Where Fili has to improve from his first fight is on the defensive side, where he blocked only 49 percent of his opponent's strikes. The good thing is that Fili has great takedowns to help him out in a jam if he gets in trouble.

Fili is a monster for this weight class, which could backfire if his ability to drop down to 145 pounds ever gets difficult, but for now it's a huge advantage. He's one of the few fighters in the division that won't give up reach to Holloway, who is 5'11" and has a 70-inch reach of his own.

The best part about this fight is both men are finishers.  Fili has only been to a decision three times in his 14 fight career, while Holloway has two knockouts thus far in his UFC career and he's very much a 'go big or go home' kind of fighter.

The pick here really is a toss-up, but given Fili's pedigree and better mat skills, he should still get the win to introduce him to more fans that will surely enjoy his exciting, no holds barred style inside the Octagon.  Fili adjusted well to the UFC during his debut, where he took the fight on short notice and still won by TKO. Now this is his chance to showcase what he can do with a full training camp and a featured spot on the main card of UFC 172.