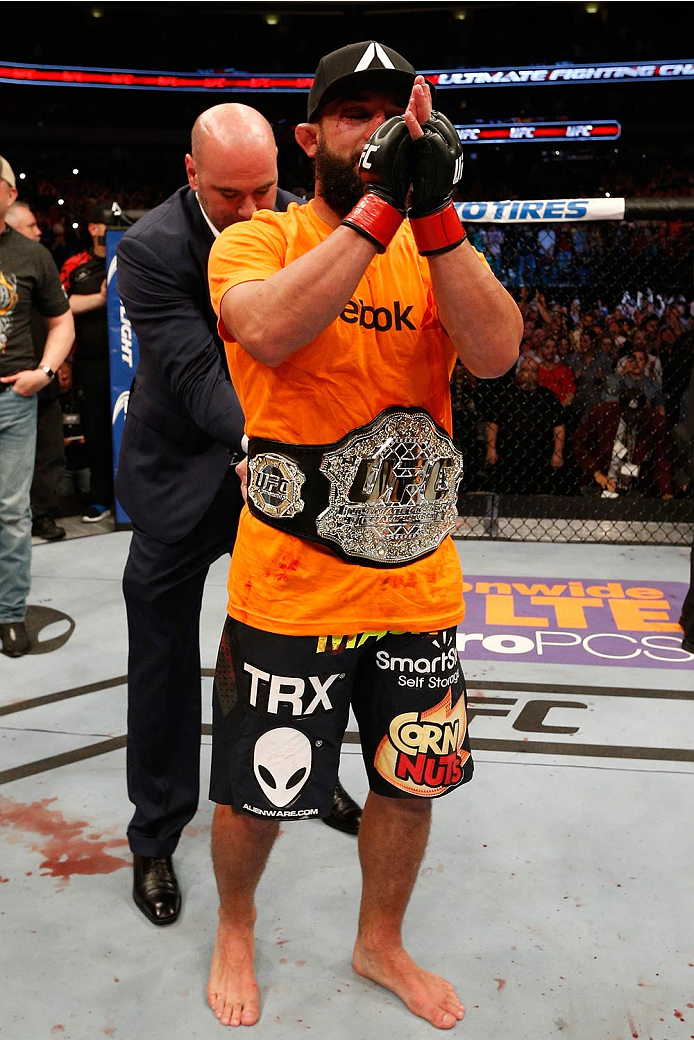 BIGG RIGG GETS HIS BELT

You might feel bad for Johny Hendricks right now. Sure, he just won the vacant UFC welterweight championship with an unforgettable five round win over Robbie Lawler, but his reward for such a feat is having a hungry division’s worth of killers all aiming for him.

Then again, that’s what Hendricks always wanted, telling UFC.com before last Saturday’s bout, “I want to be the number one guy and I want everybody to be shooting at me. I want the target on my back. And now I have the opportunity to be that guy, to be the person that everybody’s coming after, and that’s what I want.”

Well, “Bigg Rigg” got his wish, and he and Lawler fought tooth and nail for the honor Saturday night in a bout that wasn’t just an early Fight of the Year candidate, but maybe the second greatest welterweight title fight ever, right after Matt Hughes’ rematch win over Frank Trigg in 2005.

It was that good, and when you watch two fighters exhaust every option – both physically and mentally – in search of victory, it’s not simply entertainment; it’s an honor.

The sentimental favorite going into Saturday’s card was clearly Robbie Lawler, and rightfully so. Once a 20-year-old phenom with prodigious punching power and a Tyson-esque aura around him, Lawler had his ups and downs over the years, but once he returned to the UFC in 2013, he was not just winning fights in a big way, but he was seemingly enjoying the ride this time around.

When I asked him about this for a story in the latest issue of UFC 360 magazine, Lawler insisted that he always enjoyed what he was doing, something that may have come as a surprise to the media that covered him over the years. But as he explained, it wasn’t that he ran away from the attention; it simply wasn’t his style.

“I don’t think I’m necessarily running the other way,” he said. “I’m my worst critic, but sometimes, I don’t really like getting pats on the back. It’s awkward to me. I just want to be a normal person. It’s hard to explain, but I can’t complain.”

Lawler’s always been an honest fighter and an honest man. It was good to see him get his due and some well-deserved attention, even if he didn’t want it.

While I’ll go more in-depth on the welterweight title picture once this week’s updated UFC Fighter Rankings hit UFC.com, my early pick to get the first shot at Hendricks is Mr. Tyron Woodley. Yes, his fight with Carlos Condit (the number two ranked 170-pound contender behind Hendricks heading into UFC 171) ended prematurely due to injury, but up until “The Natural Born Killer” hurt his knee in the second round, it was Woodley in control and looking sharp. So when you look at his body of work thus far in the UFC, he’s got three finishes over Condit, Jay Hieron, and Josh Koscheck, and a controversial decision loss to Jake Shields that many believe he won. And if you want fireworks, Hendricks vs. Woodley would provide that and more. Sounds like a five rounder I’d want to see.

KUDOS TO THE KILLER

During Condit’s Saturday bout with Woodley, I turned to my buddy John Morgan of MMAJunkie.com and told him that I would pay to see “The Natural Born Killer” fight anyone over five rounds. And that’s coming from someone who gets into the fights for free. Win or lose, Condit has a style and attitude that guarantees compelling action, and it’s not that he’s a brawler, but an elite welterweight who can do it all in the Octagon. And after taking that first flush right to the chin from Woodley and continuing to fight on, there are few tougher. Bottom line, if Condit’s fighting, I’m watching.

If you doubted that Myles Jury was ready for prime time heading into his UFC 171 bout with Diego Sanchez, you’re probably a believer right about now. No, he doesn’t get the crowd erupting like “The Dream” does, but give him time. For now, he’s a real talent with poise beyond his years who’s ready to move even further up the lightweight rankings. And with a cast full of stalwarts ahead of him in the top 15, there should plenty of opportunities for him to make that move.

With four consecutive wins and victories in 12 of his last 13, Ovince Saint Preux’ days under the radar are done, and his quick submission of Nikita Krylov only added to the idea that he may very well be the leader of the next generation of light heavyweight contenders. No, he’s not ready for Jon Jones yet, but the former University of Tennessee football player has earned himself a top ten foe for his next fight, and with his striking power and ever-evolving ground game, the sky’s the limit for OSP.

While established stars did their thing on Saturday night, the UFC 171 card also served as a high-profile coming out party for several rising stars, including Kelvin Gastelum, Dennis Bermudez, Alex Garcia, Justin Scoggins, and Sean Strickland…Hector Lombard may have slowed down late in his win over Jake Shields, but his initial onslaught set the tone for the fight and put him in the running for a shot at Hendricks. The former Cuban Olympian is a dangerous matchup for anyone at 170 pounds, and he will be in some interesting fights over the coming months and years…Jessica Andrade vs. Raquel Pennington 2? Yeah, that sounds good to me…Solid victories for Rob Whiteford and Francisco Trevino put them in the UFC win column for the first time…