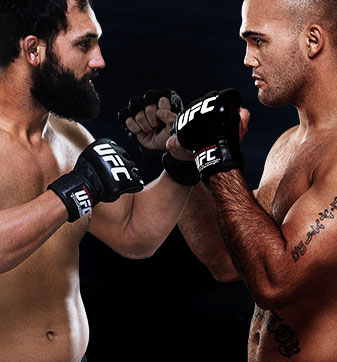 The welterweight landscape will forever change this Saturday night, as a new champion will be crowned when Johny Hendricks faces Robbie Lawler in the main event of UFC 171 in Dallas, while former interim titleholder Carlos Condit looks to regain the top spot when he takes on Tyron Woodley in a de facto No. 1 contender's bout.

The entire main card at UFC 171 is loaded with former champions and top contenders, with three outstanding welterweight matchups leading the way, and in today's fantasy preview we're going to break down those fights and see who might have the advantage or who is the underdog worth taking a risk on to earn extra points.

Who will walk out champion?  Who takes a leg up in the challenger's race?  Let's take a look at the main card and see who should be left standing when the night is over.

For the first time in nearly seven years, the UFC will have a new welterweight champion and it will be either Johny Hendricks or Robbie Lawler once Saturday night is over.  Hendricks comes into the fight following a close, controversial loss to former champion Georges St-Pierre, while Lawler trots into the matchup off a huge win over Rory MacDonald on the same card last November.

Hendricks has evolved into a well-rounded fighter over the last few years, especially since he discovered the thunderbolt he carries in his left arm.  He's also a former NCAA champion in wrestling so there's not much Hendricks can't do inside the Octagon when this fight starts.  Hendricks' power is a scary equalizer, and that says nothing for his elusiveness and ability to take a punch.  The former Oklahoma State wrestler has six knockdowns to his credit since coming to the UFC, and he has never been knocked down.  His wrestling pedigree is backed up by having the second highest takedown rate in welterweight history as well.

Robbie Lawler will test both areas, however, because not only does he have a nearly 87 percent finishing rate throughout his career, he also has the fifth shortest amount of time spent on his back in welterweight history.  His takedown defense shows at just over 57 percent, which isn't the best, but that says nothing of his ability to get up off his back in those moments when he does get taken down.  Lawler has more ways of finishing this fight as well, because while Hendricks has a deadly left hand, the former Strikeforce champion possesses a dangerous arsenal of punches, kicks, knees and elbows.  Since returning to the UFC as a welterweight, Lawler has a killer instinct like never before.

The X-factor comes down to Hendricks’ ability to implement his wrestling in this fight.  When he faced another dangerous striker in Carlos Condit last year, Hendricks was able to take him down at will and the takedowns ended up as a major factor in the judges' scoring.  Hendricks has to know Lawler wants the knockout, and while he may want the exact same thing, the smart strategy would be to wade inside very carefully and then take this fight to the mat over and over again.  This will still be a dog fight because Lawler isn't easy to keep down, and Hendricks has never been very threatening with submissions on the ground so this could be a scenario where he takes the fight down, gets up, and does it all over again.

When the fight is over, Hendricks should be standing as the new UFC welterweight champion, but he can't fade as the fourth and fifth rounds approach and he can't allow himself to become predictable or Lawler will find an opening and put his lights out in a hurry.

Carlos Condit can earn another crack at the title at UFC 171 when he faces former Strikeforce contender Tyron Woodley in the co-main event on the card.  Condit enters off a win over Martin Kampmann last September, while Woodley returns after starching Josh Koscheck by knockout in his last trip to the Octagon.

This fight really comes down to one key aspect - will Woodley try to out wrestle Condit or not?

Woodley is a former Division I wrestler out of Missouri, and during the early part of his MMA career, he was known mostly for his takedowns and ground control.  Those moves helped him best strikers like Tarec Saffiedine and Paul Daley, but lately Woodley's found power in his hands very much like main event fighter Johny Hendricks.  Like Hendricks, Woodley could employ the same strategy he did against Condit - take him down, wrestle, do it all over again.  The problem is that Condit still nearly won the fight against Hendricks and the New Mexico native has one of the most damaging guard games in the business.

Condit loves to throw elbows from the bottom and he's constantly moving and shifting his hips, while also possessing an underrated jiu-jitsu game.  If this fight stays standing, where Condit excels is from the distance with long range punches, a nasty variation of kicks, and an explosive jumping knee that opponents rarely see coming until it's already too late.  Condit's 35 percent takedown defense is troubling, and it's cost him wins in two out of his last three fights, so he has to be wary of Woodley going for the same kind of win.

Still, Condit has been here before and he knows what's at stake.  He just needs to stay away from the constant ground attacks if Woodley chooses to go that route, and if the fight is on the feet, Condit will eventually do the damage necessary to put this one away.  Condit has a ridiculous finishing rate, putting away 27 out of 29 opponents, and Woodley could very well be No. 28.

Lightweights Myles Jury and Diego Sanchez will scrap in a very interesting matchup on the main card at UFC 171, with both fighters looking to get a step ahead in a very deep 155-pound division.  Jury remains unbeaten in his professional career and lately he's looked better and better with each performance, while Sanchez is coming off a 2013 Fight of the Year candidate against Gilbert Melendez.

The key for Jury in this fight is to avoid the typical Sanchez brawl, which usually, but not always, ends up with “The Dream” drawing opponents into a messy web of haymaker punches and sloppy scrambles.  It's not an insult to Sanchez's style - if anything it's a compliment - because he has a way to always get fighters to throw down with him in a melee that usually results in some blood, sweat and a bonus check when the night is over.

Jury's advantage is that his wrestling - with near 65 percent accuracy - can nullify Sanchez's wild and crazy attacks.  It's not going to be easy and it certainly won't be pretty, but it gets the job done.  The last thing Jury can do is just stand on the outside and wing punches with Sanchez because that's like walking into the lion's den with a big juicy steak in each hand. Jury's striking defense - at almost 78 percent - also bodes well for him against Sanchez, who only lands at 36 percent accuracy.

Jury needs to pace himself and fight smart. If he does that while frustrating Sanchez with takedowns and avoiding the temptation to get into a slugfest with the former Ultimate Fighter winner, by the end of the third round Jury should come away with a victory.

If there's one underdog on the main card worth taking a risk on, it's Jake Shields in his fight against Hector Lombard.

If you watch the fight Lombard had against Yushin Okami, this could prove to be the blueprint to success for Shields to do the same exact thing against the Cuban fighter.  Shields just needs to use Lombard's aggressiveness against him, because as he rushes in looking for a blitzing combination of strikes it also leaves him exposed to the takedown.  Shields has been facing a litany of tough fighters to get to the ground lately, and while Lombard has exuded 75 percent takedown defense, it's his step forward first style that could land him on his back in this fight.

Shields absolutely cannot stand on the outside and allow Lombard to move in without the threat of a takedown.  Lombard can end this fight with one punch and the fact is that Shields cannot do the same thing back to him.  Lombard knows that Shields wants this fight on the ground, however, so this could play a role in how he chooses to dart in with punches.  Lombard didn't seem to fear the takedown much in his last fight against Nate Marquardt, but he certainly needs to keep that in the back of his mind against Shields.

Shields has to attack the legs and body of Lombard each and every time he tries to attack.  If Shields can get this fight to the ground early and show off his world-class jiu-jitsu skills, Lombard's style will be stifled until the final horn sounds.