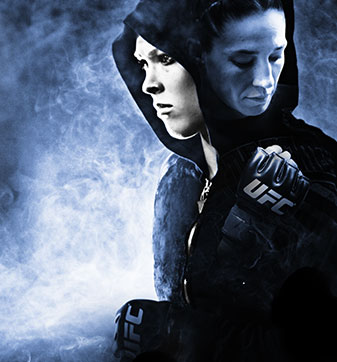 For the second time in two months, UFC women's bantamweight champion Ronda Rousey will put her title on the line, but on this go round she will face another Olympian, as Sara McMann steps up to the challenge in the main event of UFC 170 this weekend.

Tack on a welterweight battle pitting Rory MacDonald against Demian Maia as well as a striker's dream match with Stephen “Wonderboy” Thompson taking on Australian brawler Robert Whittaker and this card has all the makings of an instant classic.

In today's fantasy preview we will break down the main card and take a look at a few key aspects for the fights that may help you pick the winners from the losers and come away victorious once the event is over.

Ronda Rousey is the master of taking advantage of an opponent in an off balance situation that usually results in them going for a ride courtesy of the former Olympic bronze medalist in Judo.  Rousey's throws and takedowns from the clinch are a thing of beauty and her technique is flawless, but this might be the first time in her history that she has to alter an otherwise perfect game plan.

Sara McMann is a wrestler to the highest degree, having taken home an Olympic silver medal, and she has a lifetime spent on the mats. If there is a fighter in the UFC today that can take Rousey down and keep her on the ground it's McMann.  She's tenacious, and as a freestyle wrestler she can attack from the outside with a quick double leg takedown that's extremely hard to stop.

Where this fight separates in terms of talent and who comes away victorious is when looking at the submission game.  Rousey has one of the nastiest armbars in the business and she's finished every single one of her opponents with the move thus far in her career.  She's slick with the hold from any position, and while everyone likes to look at her throws and believe she's best set up to land the armbar from the top, you would be mistaken.  Rousey's hips are really the key.  She can swivel and attack with her hips from anywhere and because the hips are a major part of judo, Rousey is an expert at moving them around to get into position from anywhere and finishing the fight.

It's no secret that McMann is still somewhat green in her fight career, and in her biggest challenge to date she almost fell by submission to veteran fighter Shayna Baszler in her sixth professional fight.  McMann's takedowns are out of this world, but her submission defense is still suspect and that's where she gives up the gold in this fight.

Look for Rousey to press for the takedown, but whether she lands it or McMann puts her on the mat, watch the hips move and then explode as she captures yet another arm to place on her mantle and remain the UFC women's bantamweight champion.

The odds on this fight are correct - there's no typo in just how far apart Cormier and Cummins are when it comes to placing bets on who will come away victorious in this one.

Cormier makes his debut at light heavyweight, but that's after he was considered the second best heavyweight in the UFC who dropped down a division because he had no desire to face his teammate and good friend Cain Velasquez.  Cormier is a two-time Olympian in wrestling, and if not for a weight cutting disaster in his final year, there's a good chance we could be talking about him as a medalist right now.  Since coming to MMA, Cormier has developed a powerful striking game to compliment his wrestling and he's now a complete package making a beeline towards the title.

His opponent is former two-time All-American wrestler Patrick Cummins, who comes into this fight with a perfect 4-0 record, but only a few days to get ready to face Cormier in the cage.  Cummins is a physically gifted fighter who got better and better with each year he spent in the wrestling room while attending Penn State.  Cummins actually made the finals of the NCAA tournament in his senior year before falling to Ohio State champion Tommy Rowlands.  Cummins is still raw in his MMA game, although teammates like Mark Munoz and Brendan Schaub rave about his work ethic and how much he pushes them in the gym every day.

The gym isn't the Octagon, however, and Cormier has been calling the cage his home for a few years now.

Despite being a wrestler by trade, Cormier is actually very proficient on the feet as well, where he lands at nearly 55 percent accuracy in his striking while landing 4.43 strikes per minute, which is almost a full two strikes more per minute than the UFC average.  Let's not forget these statistics also come as a heavyweight, where fighters generally throw more for power instead of volume.  Cormier has also never been taken down in his MMA career and despite Cummins' claims of once making the former Olympian cry in the training room, he's not likely to get the former Oklahoma State standout down in this fight.

Cormier may come storming out of the gates to make an example out of Cummins following his harsh words after landing the fight last week. Cummins pressed all the right buttons and Cormier is not only one of the best fighters on the planet, now he's more determined than ever before to win this fight.  It's a dangerous matchup because Cummins has nothing to lose and everything to gain while the exact opposite stands true for Cormier.  Still, talent and preparation will win on Saturday night, with Cormier eventually having his way with Cummins on the feet, where he should eventually land the knockout blow.

Cummins could still have a very bright future ahead now that he's in the UFC, but it likely won't start with his debut fight.

Both Rory MacDonald and Demian Maia will look to erase recent setbacks when they face off on the main card at UFC 170 in a welterweight division thirsty for contenders.

MacDonald is going to be a very tough matchup for Maia based on one factor alone - the Canadian possesses incredible takedown defense, where he stops nearly 86 percent of his opponent's attempts to get him on the ground.  MacDonald is fast on his feet and elusive whenever an opponent engages him, and he has the second highest striking accuracy differential in the history of the welterweight division.  In other words, he hits his opponents a lot and they rarely sting him back.

Maia probably won't care much about the striking game, although he's not bad on his feet.  Where Maia excels is on the ground, where he is a wizard with submissions, and since dropping down to welterweight he's looked even stronger on the mat.  The problem he is going to experience in this fight is even getting MacDonald down, which will be no easy feat.

MacDonald has a stinging jab that he loves to put in an opponent's face over and over again, and that will keep him on the outside, far away from Maia's takedown attempts.  Where MacDonald has to be careful is with his cardio and conditioning, because in the two fights he's lost in the UFC the difference was the third round, where he was fading and his opponent took over.  Maia just has to keep things close, and if MacDonald fades in the latter part of the third round, he could be open for a takedown or a submission.

Still, where MacDonald has been overwhelmed previously was with dynamic and powerful strikers, who could still knock him out well into the 15th minute of a fight.  Maia is not that guy, so expect MacDonald to pepper him with punches from the outside and make the Brazilian miss whenever he does try to engage in the clinch.  MacDonald has the power to finish this fight on the feet, but chances are he plays it safe to avoid getting into any wild exchanges that could allow Maia time to grab him and drag the fight to the ground.  MacDonald should walk away with a decision victory as he out lands and out maneuvers Maia for three straight rounds.

You won't find any closer odds than this fight when Stephen “Wonderboy” Thompson takes on Robert Whittaker in a welterweight bout at UFC 170.

Wonderboy is a fighter that earned his nickname through a multitude of martial arts tournaments that he started competing in long before he could drive a car or even graduated grade school.  Thompson is a lifelong martial artist, but as he's developed his game over the years, he's become a dangerous striker with long limbs and a creative base that allows him to first confuse and then punish whoever is standing in front of him.  Thompson lands at nearly 52 percent accuracy with his strikes, and he comes from every angle with punches, knees, elbows and kicks.

Whittaker is no slouch in the standup game, where he matches Wonderboy statistically, but lacks the same technical prowess as the American.  Where Whittaker excels is getting an opponent to engage with him, and during an exchange there's few better than this former Ultimate Fighter winner, and when he can suck an opponent into a brawl, more times than not, he's coming away with a victory.

Whittaker has six career knockouts, and he's gunning for the finish whether it's the first minute of the fight or the very last.  Thompson has to be wary of that kind of power no matter how much he may outmatch Whittaker with his technique.  Thompson is the better striker on paper, but fights happen inside the Octagon and rarely do statistics mean much of anything once the cage door closes.

If Thompson fights smart, which means staying on the outside and swiping away at Whittaker with his kicks and darting punches, then he will come out the winner.  Thompson will give any striker at welterweight fits if they are reluctant to push forward and get in his face.  Whittaker will definitely do that, but it's Thompson's footwork and ability to get out of the way that will allow him to pot shot his opponent over and over again until the final horn sounds.