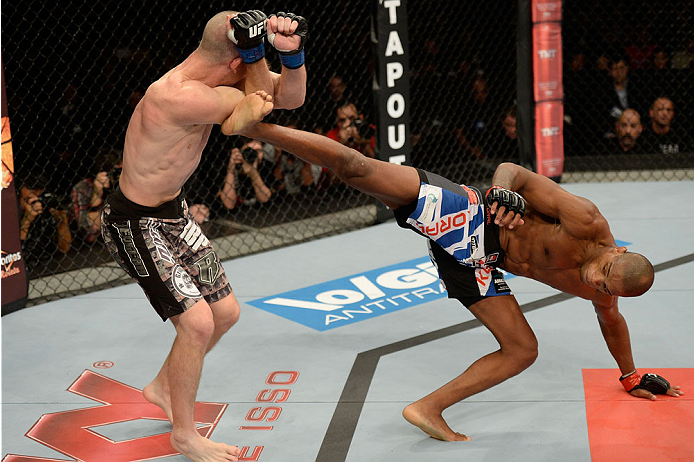 The UFC 169 preliminary card airing on FOX Sports 1 and UFC Fight Pass will showcase a slew of up and comers plus a few notable veterans, all vying for a shot at the main card with an impressive win on Saturday night.

Headlining the show are a pair of strikers as Canadian John Makdessi takes on undefeated Brazilian fighter Alan Patrick.  In a classic 'grappler vs. striker' matchup, Nick Catone fights in his home state of New Jersey as he takes on British banger Tom “Kong” Watson.

In today's fantasy preview we will break down a few of the key fights on the prelims to see who is most likely to come out on top and where there might be an upset worth picking.

Two tough lightweights will meet in the featured undercard bout at UFC 169 when Canadian John Makdessi takes on the very long and rangy Alan Patrick.

Makdessi, a student of the striking arts, comes into the fight with only two blemishes on his UFC record, and wins over several notable names, including Daron Cruickshank and Sam Stout.  Makdessi lands strikes at a very solid rate of 4.62 per minute while also exhibiting 86.24 percent takedown defense.  He's definitely not known for his own takedowns, so chances are he'll want to keep this fight standing for the duration.

Where Patrick gains an advantage is his willingness to fight on the feet or on the ground.  A multi-time Brazilian Jiu-Jitsu champion, Patrick has a great grappling background, and considering that he calls top middleweight contender Ronaldo “Jacare” Souza his idol, there's no doubt he's got the ground figured out.  Add on to that the fact that Patrick holds a three inch reach advantage over Makdessi and has no problem using his long arms to strike at an opponent, so he's tactically sound in all areas.

If Patrick can keep Makdessi at the end of his punches early and make the Canadian look for the inside game, then the Brazilian can look for trip takedowns or the clinch to work this fight to the mat.  Makdessi is as dangerous as they come with his striking, however, so Patrick can't trade punches with him for long if he wants to win this fight.  Still with the underdog value on Patrick he's a pick worth exploring for this card. He's a prospect, but Patrick has the goods to put together the right kind of strategy to frustrate Makdessi on the feet and then look for the submission on the ground.

The odds seem a bit off in this matchup, as 10-time UFC/WEC veteran Chris Cariaso takes on newcomer Danny Martinez.  Cariaso is fresh off a win in his last fight, while holding an overall record of 2-2 in the UFC's flyweight division.  Danny Martinez takes this fight on short notice after failing in his bid to win a spot on last season's edition of The Ultimate Fighter, where he was defeated by eventual finalist Davey Grant.

Cariaso is only slightly favored going into the matchup, but if he puts his game plan together correctly, he should coast to a victory on Saturday night.  Cariaso is a well-rounded fighter with an elusive striking game, mixed in with a wrestling pedigree where he typically lands almost one and a half takedowns per fight.  Cariaso also carries the experience edge, having competed in the UFC for several fights while holding wins over some solid names, including Takeya Mizugaki and Illiarde Santos.

Martinez won't be an easy out, but Cariaso should be able to control the pace with his striking and outwork the former college wrestler. Martinez could still be a solid addition to the flyweight division, but he needs a full training camp and a little more experience to get there.

Another surprising matchup based on the odds is British brawler Tom Watson against wrestler Nick Catone.

Catone is a very strong wrestler out of Rider College, plus he holds a black belt in Brazilian Jiu-Jitsu.  Catone's takedown accuracy only shows at 43.9 percent, but those numbers are a bit deceptive because he's constantly looking to take an opponent to the mat.  Catone throws nearly four takedowns per fight, and if he gets on top he's a beast.  While his UFC record has been a rollercoaster ride, it can't be discounted that he holds a win over top ten middleweight Costas Philippou and also took Mark Munoz to a split decision.

The unfortunate side of this fight is that Watson's book has been written for much of his UFC career.  The British fighter is a nasty knockout artist with dynamite in both hands and both feet, but he struggles mightily to stuff the takedown.  He blocks only 44 percent of takedowns attempted and that's coming against far less accomplished wrestlers than Catone. Watson does have a slick jiu-jitsu game off his back, so Catone has to be wary of that, but the fighter from England has to be thinking one thing and one thing only: knockout.

If Catone can drag this fight to the ground early, Watson's spirit may break.  He's already been the victim of a heavy wrestling attack in his last fight and if the ball starts rolling in that direction again, Watson could be in for a long night.  In Watson's favor is the fact that he did pick up training with Mark Munoz in the last year, so he may have found more wrestling to add to his game, but he has to stop the takedown early and go head hunting to finish Catone.

With an additional 120 points on the line due to this being a close matchup, the safe money falls in Catone's corner.

In a battle of former Ultimate Fighter competitors from season 17, Clint Hester takes on Andy Enz.  Hester was an early favorite on the show after being selected by coach Jon Jones, while Enz came up short in his bid to make the final cut, losing to eventual show finalist Uriah Hall in the opening round.  To his credit, Enz was the only fighter during the entire season to actually take Hall to a decision.

Hester is a very interesting prospect to keep an eye on in 2014 and this could be another showcase for the former boxer turned mixed martial artist.  Hester is a big middleweight with big time power in his hands.  He hits like a truck but moves like a welterweight inside the cage, and so far in his brief UFC career he's been virtually untouched.  Landing nearly four strikes per minute while defending almost 70 percent of his opponent's offensive output shows his boxing training coming into play.  He hasn't shown much wrestling yet, but that's mostly because he hasn't had to.

Enz is another solid prospect to keep an eye on, and thankfully he got another shot in the UFC after running into a brick wall for his first fight on the Ultimate Fighter.  Enz is a submission specialist with a stifling ground game, which is where he has to want this fight to end up.  He has four career submissions to his credit, so he's always looking for a choke or to grab an arm.  Enz can vary his attacks on the ground as well, as witnessed by his multitude of grappling wins during his career.

All that said, Hester is a tough out for anyone looking to make their way in the middleweight division right now, and unless Enz can get this fight to the ground, he's going to be avoiding bombs all day long.  Hester's boxing is top-notch, and if he can muscle Enz around the cage, this could be another knockout to add to his record or at worst a unanimous decision victory.