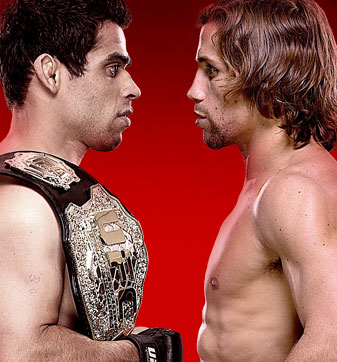 There's rarely a bigger moment in all of MMA than when a card features two title fights, and that's exactly what will happen at UFC 169, when both the bantamweight and featherweight titles are on the line.

Urijah Faber looks to follow up his incredible 2013, where he won four fights, by adding a UFC title to his resume when he faces bantamweight champion Renan Barao, while Ricardo Lamas looks to become the first UFC fighter to hand featherweight champ Jose Aldo a loss.

Add on some key matchups on the main card, including a crucial flyweight battle between John Lineker and Ali Bagautinov and a heavyweight showdown featuring Alistair Overeem against Frank Mir, and this card has all the makings of a tremendous kickoff for 2014.

Today's fantasy preview will feature the main card fights on the card - including the two title bouts - where can you score the most points, and what upsets are worth taking a shot on.

It's hard to bet against a champion like Renan Barao, who is currently in the midst of an incredible 34 fight unbeaten streak.  The best fighter in the world at 135 pounds got there by being a consistent competitor in all facets of the MMA game.  Barao lands strikes at 3.66 per minute, more than one strike higher than the UFC average, while also boasting the best takedown defense in bantamweight history.  When you tack on a dangerous submission game and the fact that Barao already has a win over Faber from UFC 149 in 2012, it gets awfully hard to pick against him.

That's exactly what's happening here, however, as Faber, despite being the underdog, comes in riding a wave of momentum that defies statistics.  Faber accepted the fight with Barao on three and a half weeks notice after finishing out an incredible 2013 campaign with four wins, three of which ended by way of submission.  There's something to be said about momentum, and what crushed Faber the last time he faced Barao may actually slam the champion this go round.

When Faber and Barao last met, it came at the expense of an injury to former champion Dominick Cruz, who blew out his knee just weeks before he was set to fight at UFC 148.  The fight between Faber and Cruz was set to go down after the rivals spent 13 weeks filming The Ultimate Fighter and as part of the card that also featured the highly anticipated rematch between Anderson Silva and Chael Sonnen, so both fighters looked to cash in by being a part of one of the biggest cards of all time.  Instead, Faber lost his chance to rematch Cruz, lost out on a huge payday and had to move his fight after already sitting out for the better part of nine months.  This time, the similar fate falls into Barao's lap.  He has been waiting for almost two years to finally settle the debate as to who is the true bantamweight champion by facing Cruz, but following another injury to Cruz, he's left holding the only 135-pound title, but now has to take on a raging buzzsaw in Faber, who he's already defeated once before.

With the role reversal in play and Faber's momentum at work, the underdog might just get the job done this time.  The stats will certainly fall into Barao's corner, but sometimes it comes down to a gut feeling and there's certainly a lot of energy falling into Faber's favor for this rematch.  It won't be easy and it won't be a blowout, but look for Faber to control the action with a mix of striking and takedowns while winning the scrambles and walking away with a decision victory and the title.

Jose Aldo has proven to be one of the best pound-for-pound fighters in the sport, and his reign atop the featherweight division has been nothing short of dominant.  He has the most wins and the most knockouts in featherweight history, coupled with the most significant strikes landed in the division.  Throw in an incredible 89.7 percent takedown defense and Aldo's not only been great - he's been unbeatable.

It's a puzzle Ricardo Lamas will have to solve, but it won't be easy.  Lamas is a dynamic wrestler with great submissions who has won every single one of his fights in the UFC/WEC when he lands a takedown.  The only problem is that Lamas lands his takedowns at just 31.3 percent accuracy and against a fighter with defense as good as Aldo, that spells disaster.  Lamas does show good striking defense at 66.7 percent, but fighting a standup fighter like Aldo, it's a ticking time bomb when the one punch or kick he needs lands and the fight is over.

If there is one hindrance possibly haunting Aldo, it's the fact that he is such a huge favorite in this fight and maybe he's overlooking a contender like Lamas.  Short of that, Aldo's combination of devastating Muay Thai with incredible takedown defense should lead him to another victory, another title defense and very likely another TKO or knockout before the final horn sounds.

Two former champions will look to stave off a possible exit from the UFC when Alistair Overeem meets Frank Mir at UFC 169 in an interesting heavyweight tilt.

Mir has been a consistent performer in the UFC for a decade already, as he's pulled off the most wins, most finishes and the fastest submissions in heavyweight history.  He also managed to pull off the most knockdowns in a heavyweight fight when he put Antonio Rodrigo Nogueira down three times in their fight at UFC 92 before getting the finish.

That said, Mir will be in a lot of danger if he can't get former kickboxing champion Alistair Overeem to the mat.  Despite losing two fights in a row, Overeem has been seconds away from winning both bouts, and if not for some fading cardio and a brilliant comeback, he could just as easily be on a win streak right now.  Overeem is a notoriously fast starter, blasting away at opponents early and looking for the finish. He's got an incredible 94.9 percent finishing rate, and when you add a 77 percent career takedown defense, chances are he's going to keep this fight standing.  While Overeem has been knocked out before, his aggressive, blitzing style is exactly the kind of fight Mir will dread come Saturday night.

If Overeem attacks with his usual ferocity, this could be a very short, very emphatic ending for Mir in the first round.  Overeem loves to get in close, which could help Mir with his takedowns, but if he clinches, look for the former Strikeforce champion to damage his opponent with knees to the body before going upstairs and punching repeatedly until the fight is stopped.

The winner of this flyweight fight could be in line for a title shot, so there's plenty riding on the matchup between Ali Bagautinov and John Lineker.

Lineker has been a terminator lately, finishing his last three opponents by knockout or TKO in the first or second round.  The Brazilian flyweight has been a destroyer with a nasty standup attack, where he lands an incredible 6.56 strikes per minute.  He also exhibits great wrestling and anti-wrestling, since he has taken down opponents with 72 percent accuracy, and in his UFC career he's never been taken to the mat.

On the other side of the cage is Russian prospect Ali Bagautinov, who might just be the kryptonite to Lineker's Superman.  The Dagestani fighter has been incredible thus far in his UFC career, winning both of his fights, but the last one against fellow top ten fighter Tim Elliott was a wakeup call to the division that a serious flyweight contender has arrived.  With a 63.41 percent striking defense, he's got the goods to block what Lineker will throw at him, and he could be the fighter to finally put the Brazilian on his back with a great mix of sambo and wrestling that is tough to counter.

Bagautinov has also been training alongside his close friend Rustam Khabilov at Jackson's MMA in New Mexico lately, so he's been working with a ton of top fighters, including fellow flyweight John Dodson.  The chemistry seems perfect for Bagautinov to counter Lineker's aggressive striking attack, put him on his back when needed, and then keep him off balance with a steady diet of punches and kicks from the outside.  If Bagautinov executes, he should pull off a unanimous decision victory and possibly earn a crack at the 125-pound title.