"The last fight is in the past and I'm really looking forward to this fight and everything is going to be different." - Anderson Silva 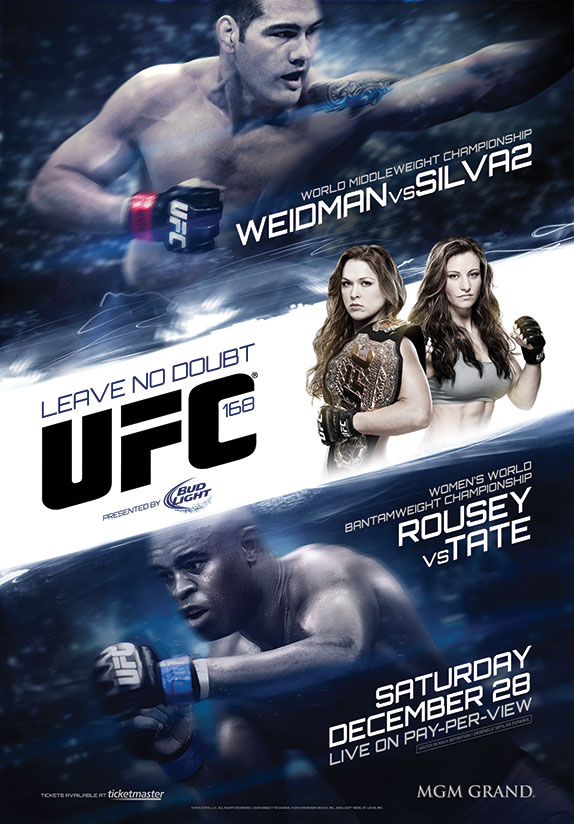 Before the clock strikes midnight on 2013, the Octagon has enlisted two of its brightest champions to put their glittery gold up for grabs against their greatest challengers for what will be easily one of the biggest events of this year.

On December 28th at the MGM Grand Garden Arena in sunny Las Vegas, Nevada, UFC middleweight champion Chris Weidman will make his first title defense against the man he took the belt from Anderson “The Spider” Silva, and in the UFC 168 co-main event, UFC women’s bantamweight champion “Rowdy” Ronda Rousey will exchange more than heated words with her focused foe Miesha Tate.

Tuesday afternoon, the always inquisitive MMA media got to ask the two current UFC champions, the former UFC champion, and the former Strikeforce champion only the most pertinent questions heading into their enormous title clashes.

Starting with the UFC women’s bantamweight collision, Tate and Rousey’s general dislike of one another has taken on many forms over the near two years they have been feuding, including spots as opposing coaches on this past season of The Ultimate Fighter. “We want to beat the hell out of each and we want to finish the fight; we don't want to go to decision,” states Tate, who is geared up to get some revenge for her March 2012 submission loss to Rousey. “I see a lot of holes in her game. I see a lot of holes that can be exploited. Just because it hasn't happened doesn't mean it can't happen.”

While 5-2 in Strikeforce and at one time the belt owner of the division, Tate is 0-1 inside the Octagon, suffering a late third round TKO loss to Cat Zingano after putting herself in the driver’s seat of the bout in the opening two rounds. “I think my maturity level and my skill set are on the same level finally - I'm just excited,” tells Tate, who, despite the loss, has had a record year as far as fame and recognition. Tate believes she is mentally in the right place for this rematch as opposed to allowing her emotions to get the best of her as in their first meeting. “I have always felt like this sport brings the most out of me.”

Across the cage with a steely-eyed stare and wearing the proverbial crown, the undefeated “Rowdy” one will be making her second UFC title defense, with the first being the gender-barrier breaking bout against Liz Carmouche in February. “Every single fight is the end of the world,” reports Rousey, clearly not taking Tate lightly. Besides the inherent world ending feeling, Rousey has made this fight camp especially taxing on herself by acting in two movies - “The Expendables III” and “Fast & Furious 7” - for two reasons: to give her something to do with all the time off between fights and because she eats pressure for breakfast.

“I think everything happened at the exact perfect time,” explains Rousey. “I think it was good for me to get away and change my mindset. I'm still training really, really hard. I flew out some of my teammates from TUF to Bulgaria to train. It broke up the long period between my last fight and now. It's kind of hard to keep the same old motivation going. The second I got back, it was go time. The more pressure there is the better I'm going to perform. It is really hard to get motivated for the same goal twice. I wanted to raise the stakes, so I was like, I’m going to make two movies, and I'm going to beat this chick again.”

In the main event rubber match, for the first time since 2006, Silva will walk to the Octagon first and not second. It’s been five months and it’s still mind-blowing that “The Spider” is not the UFC’s middleweight champion after being not only defeated, but knocked out at UFC 162 by the hands of the man he’s facing yet again and in the same arena. Besides rattling off what may have been a lost in translation proverb about having two ears and one mouth, the 38-year-old who has been called the best MMA fighter of all-time was clear that he’s moved on from the loss and simply looking to getting his belt back.

“I don't think I have anything to prove to anyone, but I'm very motivated for this fight,” asserts Silva. “The last fight is in the past and I'm really looking forward to this fight and everything is going to be different.”

Meanwhile, the new and happy UFC middleweight champion Weidman can respond without a shadow of a doubt that this training camp and his outside of the gym life is in a much better place than going into the original title bout in July. It’s not because the two-time NCAA Division I All-American wrestler has the belt around his waist as much as he’s not recovering from shoulder surgery, shaking off ring rust from a year of sitting on the sidelines, and not resurrecting his house from being destroyed by Hurricane Sandy. For Weidman, this rematch is a chance to solidify himself as better than the best, and to begin his next journey of crafting a career with an everlasting legacy.

“100% I know it's going to be a better version of me,” affirms Weidman. “Just like every fight, I want to go in there and get the finish. I went in there the last time looking to do it. I don't think I'm going to be happy if I don't go in there and get the finish. For this fight there are no excuses for me to lose. I still feel like I have everything to lose. I want to go along and achieve the long term goals I have for this sport.”

To close out the calendar year, the UFC has done it again with two title tangles with heated history as Weidman meets Silva for the second time in six months for the UFC middleweight strap, and, finally, Rousey and Tate will butt heads in the center of the Octagon for the UFC’s women’s bantamweight belt.

A victory for the champs could close out these rivalries for good or a challenger’s W will add more fuel to this unfriendly fire. Either way, fight fans win again.