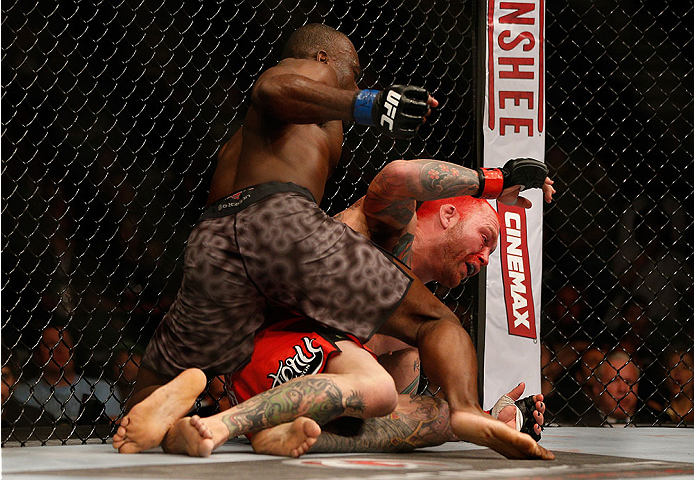 LAS VEGAS, December 28 – In his third try, The Ultimate Fighter 17 finalist Uriah Hall picked up his first UFC victory, perhaps putting an end to the career of Chris Leben in the process, as the veteran retired in the corner between rounds of their UFC 168 prelim fight at the MGM Grand Garden Arena Saturday Night.

The loss was the 33-year-old Leben’s fourth straight, and fifth in his last six bouts.

Hall opened the fight with a flying knee that dropped Leben to the seat of his pants, but “The Crippler” quickly rose and began chasing his foe, who calmly picked at him with precise counters. Yet while Leben stalked, Hall took his foot off the gas, letting his work rate drop as the TUF 1 veteran attempted to goad him into a fight. And while it didn’t work, Hall did finish the round like he started it, with a knockdown courtesy of a right hand. This time, Leben was hurt, and he took a series of hard shots before the bell. And while the bell intervened, that was all she wrote for the fight, as Leben didn’t come out of his corner for round two, saying he was done. 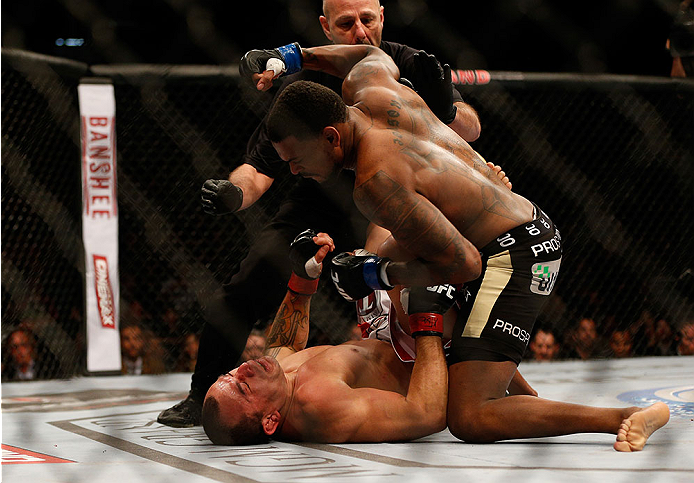 Following his big August win over Joe Lauzon, Michael Johnson one-upped it in his lightweight clash with Gleison Tibau, knocking the veteran out in the second round.

Johnson’s striking was sharp throughout the first round, as he was able to stick and move for much of the opening five minutes while avoiding Tibau’s takedown attempts. The Brazilian, loudly cheered on by his fans, was able to tag Johnson a few times though, keeping matters competitive and close.

In the second, the pattern remained unchanged, but when Johnson saw his opening, he pounced, with his southpaw jab setting up a left cross that sent Tibau sprawling to the canvas. Johnson followed-up with the finishing strikes, with referee Yves Lavigne stepping in at 1:32 of round two. 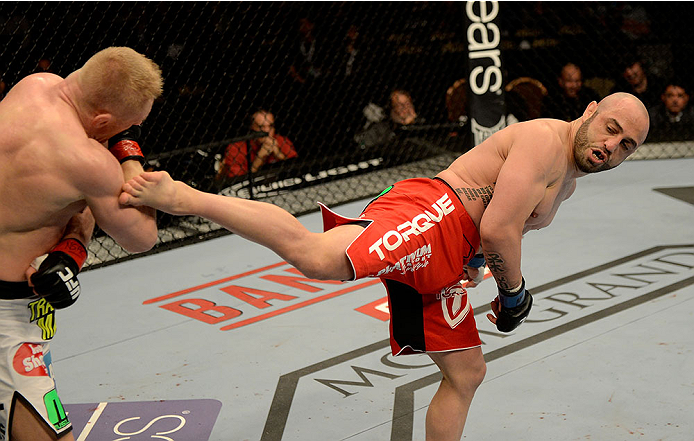 There was plenty of solid action both standing and on the mat in the opening round, with Siver controlling matters in both realms, but Gamburyan doing enough in terms of chasing submissions from the bottom to let the Germany resident know that he was in a fight.

Siver’s kicking game was sharp as the second round began, but Gamburyan (16-9) was able to nullify it with a takedown in the second minute, using his ground and pound to bloody his foe. Siver eventually found his way to his feet and tried to get his striking game back in gear, but another Gamburyan takedown ended the round in favor of “The Anvil.”

In the third, it was Siver (22-9) back in control on the canvas, as he kept Gamburyan grounded for much of the frame, yet he was unable to finish him. 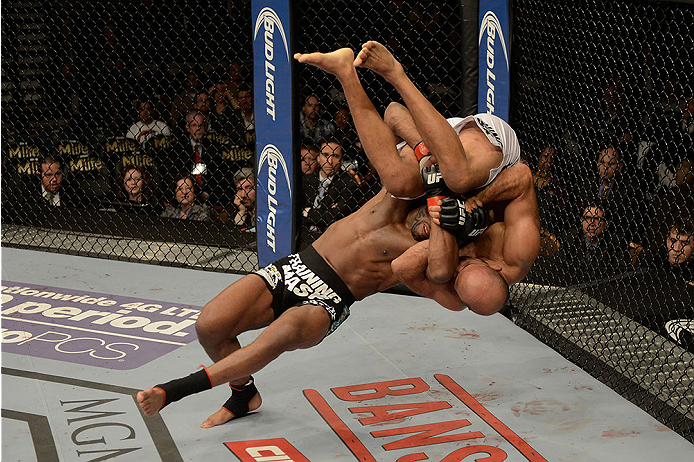 The resurgence of John Howard continued, as the Boston native won his fourth straight, returning to the welterweight division to win a clear-cut three round unanimous decision over Siyar Bahadurzada.

“His Muay Thai is very good but I train with some of the best Muay Thai fighters in the world in Boston and I was prepared for him," said Howard. "I think I showed the fans and the UFC how much I have improved. I know I still have a lot of work to do on my wrestling and my jiu-jitsu so I’ll get back in the gym right away and get better in those areas. I am going after the welterweight title and I’m willing to work harder than anyone to get there."

Bahadurzada’s more technical striking attack served him well in the first round, with Howard’s wilder rushes only occasionally finding the mark. “Doomsday” was able to score with a takedown in the final 90 seconds though, showing off some new wrinkles in his game.

Howard’s fast hooks found a home as the second began, but in the second minute it was Bahadurzada scoring with his own takedown. Like Howard a round earlier, Bahadurzada was unable to do anything with the takedown, and the two rose, Howard holding the striking edge over his tiring foe, and even picking him up and slamming him in the final minute, much to the delight of the crowd.

Bahadurzada’s gas tank continued to empty in the third round, as he only fought in spurts while Howard pressed the action and scored big on the feet and the ground, putting an exclamation mark on a big victory for the Bostonian.

Voelker (24-11) started fast, landing with his first few punches, but after Macario took them without flinching, it was time for “Patolino” to start teeing off, and tee off he did, bloodying Voelker’s nose and rocking him a couple times before the American got his bearings back in the final minute of the round.

After a slow start for Macario (8-1) in round two, the Brazilian began gunning again, busting Voelker’s face up with close range punches and elbows, prompting a visit from the Octagonside physician. And while Voelker went on the attack aggressively after being green lighted to continue, Macario was clearly in control of the fight at this point.

Charging out of his corner at the bell, Voelker tried to turn things around, but between the blood flowing down his face and Macario’s pinpoint strikes, it was a lost cause, and despite his game effort, Voelker wasn’t able to keep Macario from his first UFC win.

Featherweight prospect Robbie Peralta was told before the final round of his opening bout with Estevan Payan to go out and get a knockout. “Problems” did as instructed, finishing Payan in the third.

“I felt like I was a little behind on the scorecards because he was able to secure those takedowns and hold me down,” said Peralta. “I really didn’t think he did much with them though in terms of striking or submission attempts. My coaches told me in between the second and third rounds that I needed to go out there and finish him so that’s what I did. I let my hands go and landed to his body then I followed it up and stayed on him. I’m glad I was able to go in there tonight and get the come from behind win.”

What was expected to be a standup throwdown turned into a grappling match in the opening round, with Peralta (17-4, 1 NC) starting strong with two takedowns, but Payan turning the tables late with a reversal and some solid ground and pound work.

Payan (14-5, 1 NC) had another good round on the mat in the second frame, but in the third, Peralta apparently had enough of the ground game, as he came out and blitzed Payan with a series of strikes, with two hard left hands hurting and dropping the Arizonan. A follow-up barrage ended matters 12 seconds into the round. The referee was Yves Lavigne.