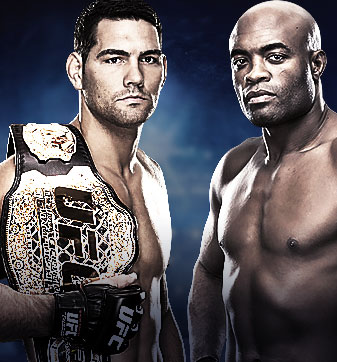 Prior to UFC 162 earlier this year, there were only a few certainties fans could always depend on: Death, taxes and Anderson Silva's reign atop the UFC middleweight division. But Chris Weidman destroyed that warm cozy feeling of comfort when his left hand slammed into the Brazilian's jaw, shattering everything you thought you knew about certainty inside the Octagon.

Now the pair of middleweights will do it all over again in the biggest rematch in UFC history as Weidman and Silva cap off the final fight card of the year while Ronda Rousey and Miesha Tate settle the nastiest rivalry this side of the Yankees and the Red Sox in the co-main event with the women's bantamweight title on the line.

UFC 168 will certainly be the biggest event of 2013, and in today's fantasy preview we will kick things off with the main card to see who has the biggest chance to walk out the victor and reign supreme when the last show of the year comes to a close.

It might seem a little crazy that the incumbent champion, in this case Chris Weidman, is actually the underdog to the fighter he knocked out to win the title in the first place six months ago.  But here we are folks, with Silva sitting comfortably as the favorite despite closer odds than he's faced in several years.  But it stands to reason that Silva has built up enough of a dangerous reputation to encourage that kind of betting line.

Silva is a terminator inside the Octagon.  He has the highest striking accuracy and most knockdowns in UFC history.  Oh yeah, and don't forget he has the longest title reign, most finishes and most post fight bonuses as well.  Silva isn't just the record holder - he's the record setter when it comes to the gold mark in the UFC. Unfortunately, there's one statistic that's lost amidst all those gaudy numbers: one loss to Chris Weidman.

Weidman was supremely confident the first time around facing Silva, saying time after time that he knew he could be the man to finally dethrone the legendary champion inside the Octagon.  The difference in the rematch?  Weidman now knows he can do it as well because he's already done it.

Add in the fact that Weidman has never been outstruck in a fight, he's got tremendous takedown acumen, and in all of his UFC fights combined he's been controlled for a whopping three seconds - so he poses a threat wherever he fights Silva in the rematch.  Weidman has had a healthy training camp and the crazy thing about the 29-year old former All-American wrestler?  He just keeps getting better.

Weidman should come out and look to set the pace early on Silva with an aggressive game of takedowns and ground and pound.  As the rounds wear on expect his confidence to grow and Silva's to fade.  Weidman can pull off the TKO again, it just might take him until the third or fourth round to do it, but this is his moment to shine, and as great as Anderson Silva has been for the past seven years, this might just be the matchup where an opponent has his number.

There will be an overload of seething hatred on display when Ronda Rousey meets Miesha Tate for the second time as they square off at UFC 168.  Rousey currently has bragging rights over Tate after defeating her in their first matchup in 2012.  Since that time, Rousey has won time after time, employing the same submission strategy, while Tate has had a rockier road to the championship, going 1-1 - including a TKO loss to Cat Zingano in her last fight.

What Tate has going for her this time around is knowing Rousey from the first fight and making the necessary adjustments to counter her offense.  She also may have a slight psychological advantage because of the anger and emotion Rousey showed for her all season long while coaching on The Ultimate Fighter.

But the fact is that when you boil away all the harsh feelings, bitterness and anger, it's still impossible to bet against Rousey in this fight.  She's been as dominant as any fighter over the last two years, and she's only improving as time goes forward.  Rousey's judo game is untouched when it comes to MMA and until she can face a fighter that can nullify her takedowns and submissions, she's going to be a tough out for anyone.  Tate will put up a battle and may draw this into the second or third round – a place Rousey has never been before – but ultimately the champion should lock up yet another submission and her second straight title defense in the UFC.

There's a deceptive statistic looming over the upcoming heavyweight battle between Josh Barnett and Travis Browne that bears a closer look.

Officially, Travis Browne has never been taken down in his UFC career and he's regarded as having 100 percent takedown defense.  Now the statistic is impressive and Browne deserves credit for stuffing every takedown an opponent has attempted on him, but the numbers are a little deceiving when digging deeper.  Through seven UFC fights, his opponents have attempted only seven total takedowns.  He's also only faced two fighters (Antonio “Bigfoot” Silva and Gabriel Gonzaga) routinely regarded as ground specialists known for submissions or ground and pound.

This time around, Browne is facing one of the best fighters to ever take a matchup to the ground and he's going to have to deal with that animal on Saturday night.

Josh Barnett is a relentless catch wrestler who takes down opponents with nearly 60 percent accuracy, but what's an even more eye popping statistic is his almost 85 percent finishing rate.  In his 28 career finishes, 18 are by submission and that's one area of Browne's game we've never seen tested. It's not to say he doesn't have tremendous submission defense, but what goes on in the practice room is much different than having a seasoned veteran like Barnett on top, constantly looking to trap an arm, a leg or a choke to end the fight in rapid order.

Barnett is just as powerful in the clinch, but expect him to shoot in early and take Browne to the ground.  If he gets the fight there in the opening minute or two, this fight may not make it to the end of the first round because Barnett is just that good once he gets an opponent in a bad position.  Barnett pulling off his 19th submission would be a good bet going into the fantasy competition this weekend.

Next to Ronda Rousey, Jim Miller will enjoy the biggest odds swing in his favor as he goes into his fight against Brazilian submission specialist Fabricio Camoes.  While Miller has certainly had his fair share of ups and downs lately, alternating between wins and losses over his last few fights, make no mistake about it, he's still a top ten lightweight who feasts on any competition not quite ready for ranked opponents.

Camoes is a threat on the ground, but Miller's tenacious offense should be overwhelming once the fight starts.  The New Jersey native is unrelenting inside the Octagon, mixing up his boxing game with a slick submission arsenal as well.  Following a tough performance in his last outing, Miller will be looking for a quick and dominant finish, but Camoes should be crafty enough to survive for all 15 minutes.  What will result, however, is a lopsided victory for Miller on the judges' scorecards.