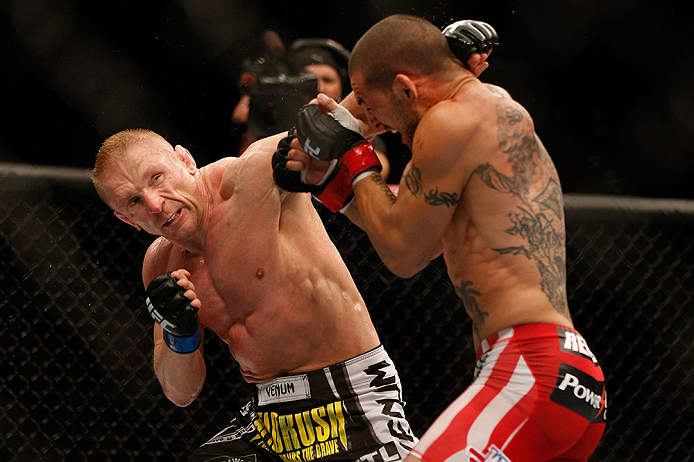 UFC 168 may be headlined by two of the biggest title fights in all of 2013, but the undercard features quite a few notable names, including a former Ultimate Fighter season 1 veteran taking on a season 17 competitor in the featured bout on the prelims.

Both Chris Leben and Uriah Hall have to know this is a must win situation for them on Saturday night, so expect them to throw everything at each other - plus the kitchen sink - to get a win.

Add in intriguing bouts such as Gleison Tibau vs. Michael Johnson and John Howard vs. Siyar Bahadurzada and UFC 168's undercard is looking pretty stacked.

The fantasy preview today will focus on a few key matchups on the preliminary card that could ultimately determine who wins and who loses once the final scores are tallied.

The odds in this fight might be a tad bit askew given the performances from both Leben and Hall lately.

Leben has looked sluggish and out of sync in his last few fights while Hall's flashes of brilliance while competing on The Ultimate Fighter have disappeared for a pair of bizarre and off balance showings since leaving the reality competition.  Statistics won't tell you much about this fight because neither Leben or Hall have really showed much in their last couple of bouts to tell what will happen in this matchup.

If the odds seem to fall in the favor of one fighter, it lands in Hall's corner based on pure talent.  Hall is a dynamic striker with creativity to boot, who does a great job of keeping his opponents at distance with quick movement and lightning fast punches and kicks.  His problem thus far in the UFC has been one of a mental block that has kept him from unleashing his true potential.  Hall sounds confident this time around that he's worked past the problems he's had lately, and if that's the case this could be the perfect showcase.

Leben is a brawler, so Hall has to keep his hands up and stay out of any big exchanges.  If he follows that strategy, Hall can pick Leben apart from the outside and have some fun with his high flying kicks to try and get the finish.  Either way, Hall needs a win and a dynamic performance to prove UFC president Dana White was right for bringing him back after a recent loss.  If Hall uncorks some of the moves we all witnessed on The Ultimate Fighter, he may pick up his first official UFC win by knockout.

German striker Dennis Siver suffered his first loss at featherweight when he fell by knockout to Cub Swanson at UFC 162 in a Fight of the Night performance.  Prior to that moment, Siver looked like a tank at 145 pounds and he'll get the chance to show off his power and skill against former Ultimate Fighter finalist Manny Gamburyan on Saturday night.

Siver hits like a truck, landing nearly four significant strikes per minute, almost double the output that Gamburyan musters.  Add into that, Gamburyan's striking defense only comes in at a shade over 57 percent and that's a recipe for trouble on the feet.  Gamburyan has a decided advantage in the grappling game, but that's only if he can get the fight to the ground, and it's not all that easy to get Siver to the mat.

Siver stops nearly 70 percent of his opponent's takedowns, and even when he hits the mat, he's slippery and able to avoid submissions with an adaptable ground game.  Look for Siver to open up the offense on the feet and keep Gamburyan frustrated throughout all 15 minutes as he will continuously search for the clinch and the takedown.  The bet is that Gamburyan won't get this fight to the mat, and on the feet Siver has a decided advantage to win a unanimous decision.

This is another case where the favorite going into UFC 168 has a great chance of winning when the night is over.  Bahadurzada is an overwhelming striker who welcomes a standup war with an opponent and Howard may give him the medicine he so richly desires after being suffocated on the mat in his last fight against Korean grappler Dong Hyun Kim.

Bahadurzada has a blitzing offense that can overwhelm an opponent in quick order, but don't expect that to happen this time around.  Howard may not win this fight, but he's going to give Bahadurzada everything he can handle.  Howard is as tough as leather and even harder to finish.  He'll be there every minute of every round, firing back at Bahadurzada during every exchange.

The problem lies in Bahadurzada's power and prowess on the feet.  He's got fight-altering power in his hands and while that may lead you to believe he'll land the knockout, it probably won't happen in this fight. Howard is savvy enough to know Bahadurzada is looking for the one punch knockout, so he'll likely play coy and stay away from his power shots.  The defensive game is great to avoid being finished, but not enough to win on the judges' scorecards, which is where Bahadurzada should come away with the points to pull out a victory.

Two featherweights in a need of a win will kick off UFC 168 on Saturday night as Robbie Peralta takes on Estevan Payan.

Peralta's UFC career started out well enough, going undefeated through his first three fights before falling to former Ultimate Fighter competitor Akira Corassani in April.  Meanwhile, Payan will probably be happy to see anyone across the cage from him not named Jeremy Stephens after the Iowa native bludgeoned him for three straight rounds en route to a one-sided decision.

Despite both fighters coming in off a loss, Peralta remains the decided favorite and the oddsmakers are once again right on the money.  Peralta was close to cracking the top ten or fifteen fighters in the featherweight division prior to his last loss.  He's got serious knockout power lurking in his hands, and if he can control this fight, Peralta has a definite advantage.

Payan likes to bully his opponents, and that's what backfired against Stephens and what could happen again facing Peralta.  If he can't set the pace and take the center of the Octagon when the opening of the fight happens, Payan could be in trouble.  Peralta throws nearly five significant strikes per minute, and if he can connect with one solid punch he could put Payan down for good.  Following his last loss, there's no doubt that Payan can take a licking and keep on ticking, but he may go into survival mode in a hurry if Peralta lands flush with punches early in the first two rounds.

Look for Peralta to get the win and he may do so with a decision or even a TKO in the first two rounds.