There was more to UFC 167 than GSP-Hendricks...here's a look at the rest of the card... 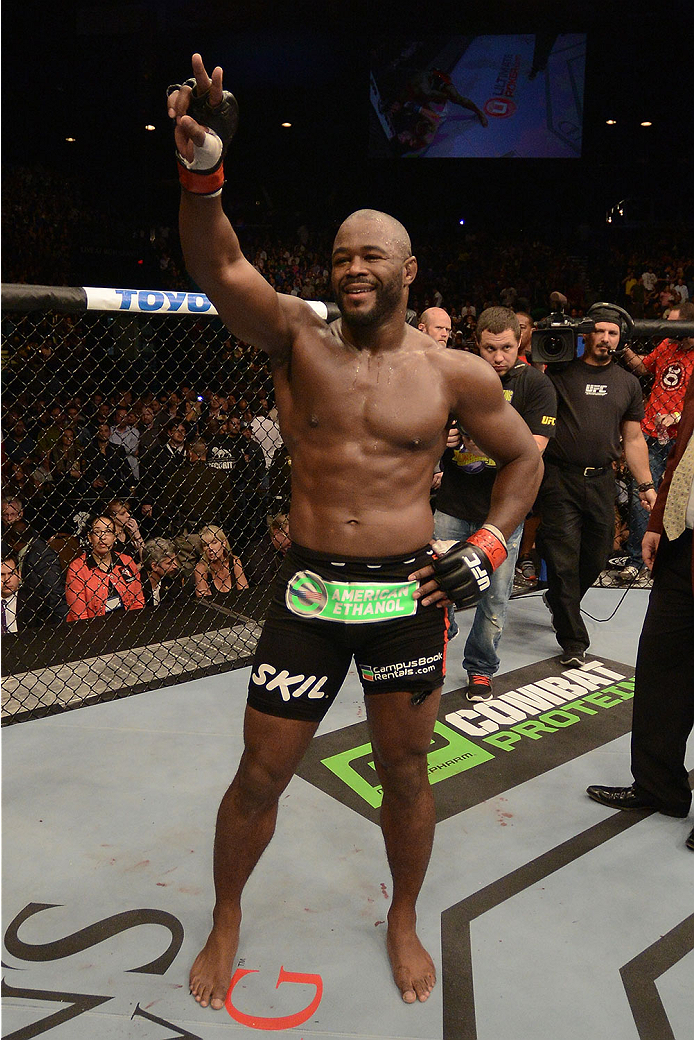 RUTHLESS RASHAD…
When Rashad Evans’ UFC 167 co-main event win over Chael Sonnen was over, it reminded me of something boxing legend Joe Louis did during his lengthy reign as heavyweight champion. Facing his friend, light heavyweight champion John Henry Lewis, in January of 1939, Louis dropped the challenger three times before the fight ended at 2:29 of the first round. You might say ‘what kind of friend is that?’ but the reality is that the most merciful thing Louis could have done was finish his buddy as quick as possible and not deliver a prolonged beating. This is how I saw Evans-Sonnen. Rashad was the superior fighter last Saturday night, and he went out there and finished the bout as soon as he got the chance. And if there were any doubts about Evans’ place in the light heavyweight pecking order, his wins over Dan Henderson and Sonnen should have erased them. “Suga” is most certainly back again.

…AND RUTHLESS ROBBIE
Speaking of remarkable career turnarounds, none has been as impressive as that of Robbie Lawler. Yeah, the 2013 knockouts of Josh Koscheck and Bobby Voelker were something to see, but when he upset the heir apparent to the welterweight crown, Rory MacDonald, on Saturday night, he went from ‘feel good’ story to legitimate title contender. If you would have told anyone that after back-to-back losses to Nick Diaz and Evan Tanner in 2004, Lawler was going to be in this position nine years later, there would have been some interesting looks sent in your direction. But he’s done it, and having dealt with him then, during the Strikeforce years, and now, there is a new maturity and focus to the 31-year-old, and an ease in the spotlight that wasn’t there before. If you want to point to someone who’s enjoying the ride, it’s “Ruthless” Robbie Lawler.

TWOOD IN THE STATEMENT MAKING BUSINESS
Take away his lackluster (and controversial) decision loss to Jake Shields in June, and Tyron Woodley has one of the most impressive 2013 resumes in the welterweight division, with two first round knockouts of Jay Hieron and Josh Koscheck both making the year’s highlight reel. And when you think about it, if he did get the nod against Shields, we might be talking about “TWood” being a solid member of the title contenders club. As it stands, I think another win over a top ten foe to kick off 2014 puts Woodley in good stead for a late-year run at the belt.

KOS’ FUTURE
As one of only four TUF 1 alumni (Mike Swick, Diego Sanchez, Chris Leben are the others) still competing in the Octagon, Josh Koscheck’s knockout loss to Tyron Woodley inevitably brought up the idea that maybe Kos had seen better days, especially with that being his third consecutive defeat and second by knockout. Yet despite Koscheck being 35 and on the other side of a long career, I’m not convinced that he’s done. Woodley and Robbie Lawler will knock out anyone they catch clean, and there are still those who believe the Lawler stoppage was a bit premature. And if you look at the first loss of the recent trio, Koscheck dropped a split decision to a guy – Johny Hendricks – that many believed should have left the MGM Grand Garden Arena with the welterweight title around his waist. Hey, if Koscheck feels the time is right for him to walk away, then he should. But if not, I say he should at least get one more shot to prove he can still swim with the sharks.

STORY’S TIME
I don’t know if anyone throws harder than Rick Story. Just listen to the shots he delivered to Brian Ebersole last Saturday night if you doubt me. It was as impressive a performance as Story has put together thus far, and he’s had more than his share. The question is, will he be able to regain the consistency he had during a six fight winning streak in 2009-11 that saw him defeat Hendricks and Thiago Alves, among others? If he does, 2014 may be the year of “The Horror.”

THE NEW PHENOM
I don’t think anyone envied Sergio Pettis as the 20-year-old made his UFC debut against Will Campuzano Saturday night, with him being the brother of lightweight boss Anthony Pettis, but the kid impressed, not just with his talent, but his poise. This isn’t someone who is going to get rattled easy, and when faced with a hungry veteran looking to prove that he belonged back in the UFC in Campuzano, he didn’t fade or show the UFC jitters. And if he had them, he hid them perfectly en route to a hard-fought but clear-cut victory. The future is going to be fun for the UFC’s latest “Phenom.”

THIS AND THAT
Donald Cerrone looked outstanding in his Submission of the Night win over Evan Dunham. Best he’s ever looked? Possibly, as he really put together all aspects of his game to beat an ultra-tough opponent in Dunham…Ali Bagautinov is the latest Russian prospect to make a positive impression in the Octagon, and this influx of quality fighters may be the most underreported but biggest news in MMA this year…Gian Villante finally got in the UFC win column with his TKO of Cody Donovan, adding to the lengthy list of victories put together by Long Islanders in 2013…Solid wins by Jason High, Thales Leites, and Erik Perez keep all three high on the fighters to watch list for 2014.