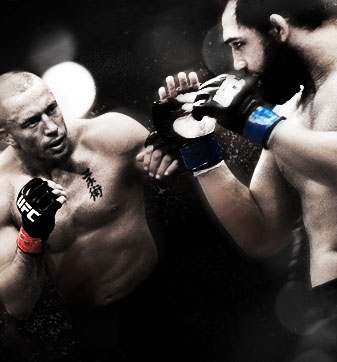 The UFC will celebrate its 20th anniversary on Saturday night as UFC 167 descends on Las Vegas for one of the biggest championship fights of the year, with welterweight king Georges St-Pierre looking to make his ninth consecutive title defense against possibly his toughest challenge yet in knockout artist Johny Hendricks.

Also on the card, former light heavyweight champion Rashad Evans looks to pick up his second win in a row while facing friend and broadcast colleague Chael Sonnen in a showdown at 205 pounds.

The rest of the main card is just as ridiculously stacked, as Rory MacDonald takes on Robbie Lawler, while Josh Koscheck faces off with Tyron Woodley in a battle of former collegiate wrestlers.

In today's fantasy preview we will break down some of the key fights on the main card, look at the odds, and see where the best picks will be as UFC 167 starts to unfold.

Georges St-Pierre is not only the greatest welterweight champion in UFC history, he's accomplished more statistically than just about any fighter on the roster.  St-Pierre is a machine inside the cage and he currently holds or is tied when it comes to the records for most wins, most strikes landed, and most takedowns landed in UFC history.  He also happens to have the best striking defense and takedown defense in the welterweight division.  The point? St-Pierre is really good and it's going to take an awful lot to beat him.

Johny Hendricks might be the kryptonite to St-Pierre's Superman, however, because the former NCAA champion boasts huge, one punch knockout power and to his credit he has six knockdowns in his UFC career while never having been knocked down by an opponent.  He also possesses the highest takedown average in welterweight history and has nearly 70-percent takedown defense as well.  Hendricks absolutely has the power to put St-Pierre's lights out in a hurry and his left hand could easily be categorized as a deadly weapon.  If this fight gets finished, chances are that it's Hendricks that's going to be swinging the hammer.

That said, St-Pierre is still an animal and a puzzle that few have figured out.  Outside of a head kick landed by Carlos Condit two fights ago, St-Pierre hasn't looked any worse for wear since having major knee surgery, and his ability to impose his will on an opponent hasn't changed one bit.  St-Pierre lands takedowns at 75-percent accuracy clip, and he's taken down some very good wrestlers in his career, so Hendricks wouldn't be the first.  Mix that in with his 54-percent striking accuracy and a crazy 75-percent striking defense, and St-Pierre is as hard to hit as anybody in the UFC.   St-Pierre can set the pace in this one with a mix of takedowns and by using his superior jab, which is his best striking weapon.  Hendricks will be gunning for a one punch knockout, but the odds are on St-Pierre to pull out the victory by decision.

Two of the best wrestlers in the UFC will face off in the co-main event at UFC 167 as Rashad Evans takes on Chael Sonnen.  The reason wrestling is mentioned right off the bat isn't just because that's the background for both fighters, but because it could be the key to who comes out victorious in this matchup.  Sonnen is a fighter who loves to be on the ground.  He has landed the most takedowns in middleweight history and averages 4.01 takedowns per 15 minutes in the cage. He's also very effective as a striker, with the second highest rate in UFC history, but the majority of those are landed when he's on the ground, and that's where the problem comes in with this fight.

Evans can match Sonnen in the wrestling game with his nearly 65-percent takedown defense, and he's allowed the third fewest takedowns per 15 minutes in light heavyweight history.  In other words, it's tough enough to get Evans down once, but don't count on doing it multiple times in a fight at all.  Evans also has some powerful punching in his back pocket with the second most knockouts in light heavyweight history, and a speed edge over Sonnen that should be noticeable if they exchange on the feet.

Should Evans negate Sonnen's takedowns, which he should be able to based on his history, he then can look to establish his jab and maybe take his opponent to the mat instead.  Evans can then unleash his ground and pound, which can be devastating to any fighter including Chael Sonnen.  Expect Evans to get the job done in this one and possibly pull of a TKO or stoppage before the final horn sounds.

The biggest difference in odds on the main card comes in this welterweight showdown between young upstart Rory MacDonald and veteran fighter Robbie Lawler.  On paper, MacDonald remains the heavy favorite to win based on his striking (second highest striking rate among welterweights, as well as second highest striking accuracy differential in welterweight history) plus a growing ground game that has seen him end up with the fifth highest takedown accuracy in the division.  Outside of his third round against Carlos Condit, which accounts for his only loss, MacDonald has been pretty much flawless thus far in his UFC career.

What Lawler has in his corner is veteran experience and two of the most dangerous hands in the history of MMA.  Lawler is a destroyer of men - he's got a sickening 90.5-percent finishing rate, plus he can work from the clinch, which may be where he's most dangerous.  Lawler has the fourth largest proportion of clinch strikes in welterweight history, which means he's not going to stand on the outside with MacDonald unless he chooses to employ that strategy.

The smart pick remains MacDonald - he's young, he's strong, and he may end up being the second coming of Georges St-Pierre when it's all said and done.  But if there was an underdog worth betting on this card, it's Robbie Lawler.  He's got flash knockout power and since moving back down to welterweight he's been demolishing opponents.  If Lawler can get MacDonald to engage on the feet with him for any significant amount of time, it will only take one punch to create a major shift in the welterweight divisional rankings.

Former Ultimate Fighter season 1 competitor Josh Koscheck hopes to get back to his winning ways at UFC 167 after losing two straight fights, the last of which ended in a knockout thanks to Robbie Lawler.  This time around he faces a fellow wrestler in former Strikeforce contender Tyron Woodley, who is looking to pick up his second UFC win after faltering in his last bout against Jake Shields.

This could be a passing of the guard because Koscheck isn't getting any younger and he's had more than his fair share of wars inside the Octagon, but it's not clear if Woodley is the man who will take the torch and run with it.  Woodley is next to impossible to take down – he's defended 94.1-percent of takedowns in his last 10 fights - and he's a strong wrestler himself, having won many fights by putting an opponent on their back and punishing them from the top position.

Odds are, however, that Koscheck is still too good of a wrestler to let Woodley take him down, and on the feet the two welterweights are much, much closer in skill sets.  Koscheck does possess a nasty jab, and big time knockout power.  Koscheck has the third most finishes in welterweight history, and his overhand right is one of the best in the business.  The former Ultimate Fighter alum may be getting a little longer in the tooth, but that doesn't mean this dog can't still hunt.

Look for Koscheck to establish his striking at a distance and force Woodley to engage.  If that happens, Koscheck could just ride out the full 15 minutes by out punching Woodley, or drive forward with one of his signature double leg takedowns and put the former Missouri wrestler on his back in unfamiliar territory.