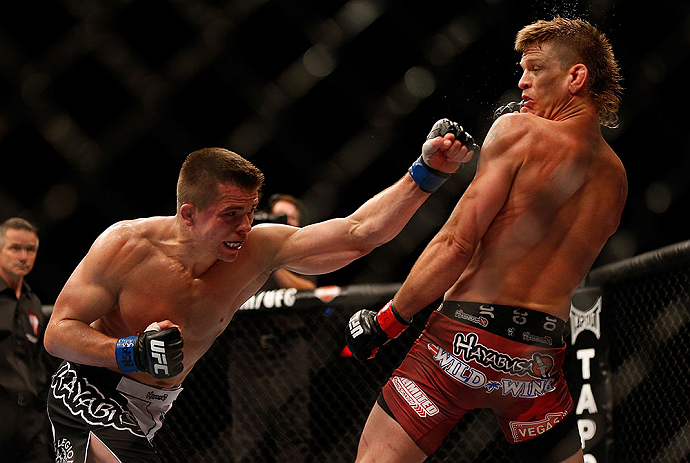 UFC 167 will feature some of the best fights of the year, and a bunch of them aren't even on the main card, proving that the preliminary bouts are stacked from top to bottom with talent.

From the showcase fight in the lightweight division between Evan Dunham and Donald “Cowboy” Cerrone to the debut of highly touted prospect Sergio Pettis, the preliminary card has something for everybody.

Today's fantasy preview will examine some of those pivotal fights on the undercard as we look to find out who will come away victorious while scoring some serious points versus those risky bets that are going to be tough to make.

Two fighters in desperate need of some consistency will face off at UFC 167 when Evan Dunham meets Donald “Cowboy” Cerrone in the featured bout on the preliminary card.  Both fighters recently fought and lost to top ten lightweight Rafael Dos Anjos, although Dunham had a very close fight with the Brazilian while Cerrone struggled to find any kind of consistency when they faced off.  Still, styles make matchups and this one seems to favor Cerrone, at least on paper.

Cerrone is a highly skilled kickboxer who had a ton of Muay Thai fights before turning his attention to MMA.  The Team Jackson fighter loves to plod forward and pick his opponents apart with potent punches and crushing kicks, and if he gets into a rhythm it's lights out for any top 155-pound fighter in the world.

Dunham has solid standup of his own, but he's largely abandoned a very slick ground game that paid dividends early in his career to instead focus on striking, and it hasn't yielded the best results just yet. Dunham has gone 3-4 over his last seven fights, and while he's definitely making it hard on every opponent he faces, inconsistency in his ability to put opponents away while taking a mountain of punishment have come back to haunt him.  Given Cerrone's tendency to throw a barrage of punches and kicks over the course of 15 minutes, Dunham could come out on the wrong end of another unanimous decision fight in this one as well.  Cerrone outlands Dunham with 47.18-percent accuracy on the feet, and if he can put a few combinations together each round, he should cruise to a win on the judges’ scorecards.

It's been well over a year since Brian Ebersole last competed in the UFC, and he returns as a welterweight after last proclaiming that he was on his way to lightweight following a loss to James Head at UFC 149 in 2012.  Welcoming Ebersole back is perennial welterweight tough guy Rick Story, who may not be at the top of the heap when it comes to rankings, but he's certainly got the credentials to get there.

Story shows flashes of brilliance in some of his fights that make just about everyone believe he could one day be champion.  As the only fighter in the UFC to currently hold a win over top rated welterweight contender Johny Hendricks, Story is well aware of how to get the biggest victories.  He's also bested heavy-handed striker Thiago Alves as well, so Story is always going to be a threat to the top ten if he can put the right combination of wins together.  He's starting this fight off a loss in a very close, controversial decision to Mike Pyle, but that shouldn't deter anyone from picking Story in this fight because it's his to lose. Let's also not forget that for the biggest part of his training camp, Story has been in Montreal training alongside welterweight champion Georges St-Pierre and Rory MacDonald and there's no better confidence booster than going against two of the best in the division as he gets ready for a fight.

Story is a monster in the wrestling game and the clinch, and packs a serious punch from that area as well. He lands 3.39 strikes per minute and lands takedowns at 52 percent accuracy.  Now Ebersole is great at countering takedowns (73 percent takedown defense) but he's not faced a wrestler with the kind of suffocating control that Story possesses.  Story will grind Ebersole against the cage and either look for the takedown or just try to beat him up in the clinch.  Either way results in Story getting the decision win.

The recurring theme at UFC 167 seems to be pitting wrestler against wrestler and it happens again in an intriguing undercard bout as Jason High takes on Anthony Lapsley in a welterweight contest.  High finally picked up his first UFC win in his last fight when he choked out James Head at UFC Fight Night: Condit vs. Kampmann back in August.  Meanwhile, Lapsley makes his UFC debut after four straight victories in regional promotions around the Midwest.

Where this fight splits apart comes down to High's superior wrestling and grappling ability, plus the fact that he's fought on this stage before, so there's no chance of nerves getting the best of him.  High is a great wrestler who can put anybody he faces on their back while also pulling off some very slick submissions.  On the other side, Lapsley has his own ground game, but when it comes to wrestling he doesn't match up with High.

The biggest key in this fight might come down to those notorious Octagon jitters, however, because Lapsley enters the UFC on his 30th professional fight.  That's a long career to fight before finally getting the call up to the big show and that also comes with a load of pressure.  Lapsley has also struggled at points in some of his biggest fights, losing to UFC veterans like Jay Hieron and Mike Guymon.  If he stutter steps against High at all in this fight, he's probably going to get caught in a submission and move his UFC record to 0-1.

High is very good at engaging and getting the fight to the mat, and that's where he should take over and look for a early or second round submission.

Sergio Pettis vs. Will Campuzano

20-year-old prospect Sergio Pettis, younger brother of UFC lightweight champion Anthony Pettis, will make his debut at UFC 167 to kick off what could be a very promising career in the Octagon.  Pettis is very similar to his brother in respects to his skill set in the cage – he’s a lightning quick striker as he spits venom with every punch and kick while also employing a solid ground game with good submissions as well.

Pettis is probably the most highly touted prospect to debut in the UFC since Ireland's own Conor McGregor arrived earlier this year.  Just like McGregor, Pettis has the weapons to back up the hype and he has the chance to showcase just how good he is at UFC 167.  Campuzano is no pushover, but stepping in as a late notice replacement, the odds are against him in this one.

Pettis is well-rounded but look for him to target Campuzano for the knockout early and often, possibly even finishing in the first round if he can put together the right combination of strikes.  It could be a Knockout of the Night when it's all over.