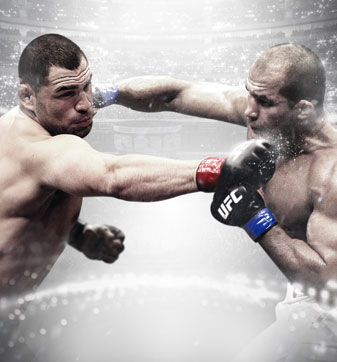 When UFC 166 goes down in Houston on October 19 it's going to be a special event on many levels, but maybe none bigger than the one that sees us all bear witness to what could possibly be the best heavyweight rivalry in MMA history.

Now that's a strong statement to make given the laundry list of great champions that have competed in the UFC over the years, but Cain Velasquez and Junior Dos Santos have separated themselves recently as the true upper echelon of the division.

At UFC 166, Velasquez and Dos Santos will meet for a third, and potentially final, fight in their epic trilogy with the heavyweight title on the line, while former Olympian Daniel Cormier tries to settle a long standing grudge with Roy Nelson on his way to the 205-pound division.

It's a stacked card that needs no further billing, so in today's fantasy preview we will focus on the main card from top to bottom to see what plays make the most sense, and who is favored to win in the upcoming card from Houston.

1) Cain Velasquez is a special athlete who probably doesn't get the recognition he deserves for just how good he truly is.  The UFC's reigning and defending champion has the most knockouts in the history of the heavyweight division (eight), has the highest striking rate in UFC history at 6.5 significant strikes per minute, and also has the most takedowns in heavyweight history as well (27).  The gaudy numbers are matched by his record, which currently stands at 12-1 overall - the one loss comes by way of knockout courtesy of his next opponent Junior Dos Santos.

In a Velasquez-free world, Dos Santos would undoubtedly stand alone as king. He has the most knockdowns in heavyweight history, third most significant strikes landed and the third highest takedown defense among heavyweights.  The only blemish on his UFC record was his 2012 loss to Velasquez.  It's easy to see now where this is going - these are the two best heavyweights in the world, by far, and they are about to collide again.  Heading into the third fight, Velasquez is slightly favored with -240 odds, with the underdog Dos Santos at +190, but this really is anybody's fight.  Dos Santos knows he has to avoid the clinch and the takedowns from Velasquez, and the strategy for the champion is the exact opposite. Stay out of Dos Santos' range and avoid his strikes from a distance.  Because it's a title fight and the main event, picking this one correctly in the UFC Fantasy game is key.

Right now, it's hard to bet against Velasquez. He's got the wrestling to nullify Dos Santos' striking, and he knows better than to stand on the outside and wing punches with the Brazilian after their first fight ended in just over a minute's time.  Velasquez's pace is unmatched in the heavyweight division, and each second that ticks away, the fight falls more and more into his corner.  While both fighters are known as finishers, it might be safer to assume this third bout looks a little bit more like their second showdown and, ultimately, Velasquez is favored to win a decision again.

2) Daniel Cormier's UFC heavyweight career will be short and over after he fights Roy Nelson at UFC 166.  The former Olympic captain has said he will drop to 205 pounds after this bout, and he's already shedding weight to make the cut easier. Recently, Cormier has been walking around at around 225 pounds, much lower than his UFC debut against Frank Mir in April, but will the weight loss affect him against Nelson?

Cormier is a massive favorite to the tune of -550 odds, while Nelson sits as a +400 betting underdog.  On paper this one seems prime for the upset, plus picking Nelson earns you another 400 points because he is such an overwhelming underdog. The problem is on paper, Cormier is a nightmare matchup for Nelson.  He's a wrestler that can take Nelson down or pin him against the cage at will. Cormier has outlanded every opponent he's faced between the UFC and Strikeforce, and also has the fourth best striking defense in Strikeforce history, which is where he would potentially be in the most danger from Nelson's powerful right hand.

If Cormier can avoid the Roy-bomb and use his ability to press the action against the cage and get the fight to the ground where he's comfortable, he should coast to a unanimous decision victory.  He's been on the mat with a veteran grappler like Josh Barnett already, so it's hard to imagine Cormier fearing Nelson's submission game.  Cormier just has to avoid being sucked into Nelson's striking, which can end the fight with just one punch.

3) Diego Sanchez is promising the best performance of his career at UFC 166, but he has to pull it off against one of the best lightweights in the world in Gilbert Melendez.  Sanchez is known for the ultra exciting style that has earned him five Fight of the Night bonuses, and he's only been finished once (via cut in his title fight against BJ Penn at UFC 107).  He's an active striker who has outworked his opponents in 12 of 13 career UFC wins.  Sanchez loves to wrestle as well, but his rate of landing takedowns at only 18.9 percent could be a telling factor in this fight.

Melendez already stuffed 76.7-percent of takedown attempts while in Strikeforce, and stymied four out of four takedowns from former UFC champion Benson Henderson in their fight back in April.  Melendez also strikes at an incredibly powerful rate, with 749 significant strikes and 1215 total strikes - both Strikeforce records.  Where Melendez has to be careful is not to get drawn into a classic Diego Sanchez slugfest where he wears an opponent out early and takes over with superior cardio late.  What Melendez has going for him is that Sanchez makes a big cut to get down to 155 pounds, and in a three round fight (the first three round fight he's had in over three years) he shouldn't have to worry too much about cardio.

Melendez is a whopping -600 favorite over Sanchez (+400), which gives him the biggest odds for victory on the card.  It's a smart pick to believe Melendez can stuff Sanchez's takedowns, and land the bigger, more effective punches on the feet.  He won't finish Sanchez, but he should be able to pull out the rounds to get the nod by unanimous decision.

4) John Dodson will return after his first UFC loss against Demetrious Johnson earlier this year to take on top flyweight prospect Darrell Montague.  Dodson is as good as they come in the 125-pound division, mixing a blistering array of strikes with his 80-percent takedown defense.  Dodson is a whirling dervish inside the Octagon, throwing sledgehammers for fists that can hurt anybody if they land.  Montague is a solid addition to the division, but he's getting an awfully tall order with this fight.

Expect Dodson to set the pace early and try to overwhelm Montague in his first UFC fight.  Montague has only lost twice in his career, but they both came to experienced UFC vets in Ian McCall and Robbie Peralta.  Unless he can pull out the upset as a +280 underdog to Dodson as the favorite at -340, Montague probably won't have the best memory of his first fight in the UFC.  Dodson can bomb away at will and should get the finish inside the distance by TKO.