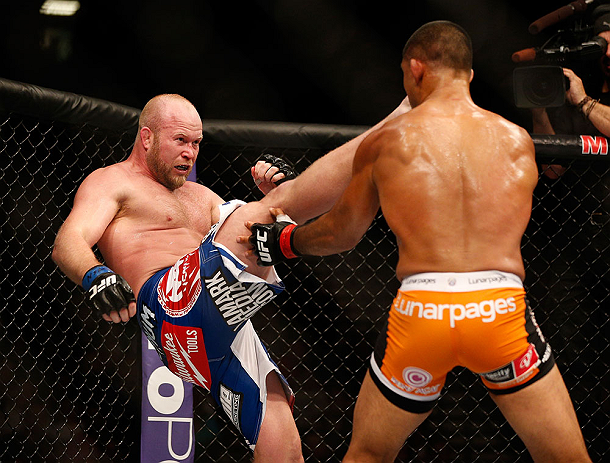 UFC 166 may go down as one of the most stacked cards of the year, in part because the preliminary bouts feature several former champions and top ten fighters, all battling for recognition.

Leading the way is an intriguing middleweight fight between No. 10 ranked Tim Boetsch, who looks to get back on track after recent setbacks when he takes on former Ultimate Fighter finalist CB Dollaway, while former Strikeforce welterweight champion Nate Marquardt takes on heavy-hitter Hector Lombard in his debut at 170 pounds.

Today's fantasy preview will break down the preliminary card with some of the key fights that will take place on Saturday night in Houston.

1) Tim Boetsch knows he needs to get a win at UFC 166 to stay in the thick of the middleweight division. He's lost his last two fights in a row after a blistering debut in the 185-pound weight class with back-to-back wins over Hector Lombard and Yushin Okami.  In his last fight, Boetsch struggled against the wrestling of Mark Munoz, and he's going to have to battle another grappler in CB Dollaway this time around.

Dollaway is a former NCAA All-American who has transitioned his wrestling game very well to MMA.  He lands takedowns at 56.1-percent accuracy and he's shown good conditioning in recent fights as well, something that Boetsch has struggled with throughout his career.  Dollaway has to be wary of Boetsch's power at all times though.  If he gets caught against the cage or naps on his feet for too long, he might be asleep courtesy of a Boetsch uppercut.

Still, for the upset-minded, Dollaway holds good value on this card. He's got the ability to take Boetsch to the ground, and those are typically the guys that have given him the most problems during his UFC career.  If Dollaway gets this one down early, he could repeat the process over all 15 minutes to get the win.

2) Nate Marquardt will welcome Hector Lombard to the welterweight division at UFC 166 in a very interesting matchup on the undercard.  Marquardt is a former UFC middleweight contender and Strikeforce welterweight champion who will try to put a stop to a recent two fight skid that saw him lose to Tarec Saffiedine and Jake Ellenberger.  Lombard will drop down to welterweight for the first time after living most of his life as a terror at 185 pounds, but after tough losses to Tim Boetsch and Yushin Okami, the judo expert decided to make the move down a division.  Lombard was a notoriously fast starter during his middleweight career, just bombarding opponents with strikes in the early part of fights.  That exact strategy is what stunned and surprised Marquardt in his last fight.

It's hard to imagine Marquardt being overwhelmed like that two times in a row, plus Lombard is making the cut to 170 pounds for the first time, but his ability to blitz an opponent on the feet, plus an underrated ground game, make him the pick.  As long as Lombard isn't drained by the weight cut, he's got the power and the technique to put Marquardt to sleep in this one.

3) The ladies have been on fire since coming to the UFC earlier this year, and the upcoming bout at UFC 166 is no exception.  Former Strikeforce champion Sarah Kaufman will make her debut against former top flyweight Jessica Eye.  Kaufman is a big, powerful striker with the kind of tenacity that has defined her career. She's tough as nails, and packs a serious punch, as evidenced by her 10 career knockouts.  Kaufman holds impressive wins over names like Alexis Davis and Miesha Tate as well.

As for Eye, she's regarded as one of the top prospects in the women's division, with a 10-1 record overall.  Eye has a great overall MMA game, mixing submissions with a solid striking game she hones at her home gym in Cleveland alongside names like UFC heavyweight Stipe Miocic.  Kaufman seems like the favorite here based on track record and reputation alone, but Eye is an underdog worth keeping an eye on this time around.  She's fast and elusive, and while she's fought for a big part of her career at 125 pounds, the move up to bantamweight has allowed her to hit the weight room more and add some more power to her game.  Eye is a good upset pick to win by decision, but Kaufman remains the safe selection given her history.

4) There is a classic striker vs. grappler matchup on the UFC 166 undercard that could be very exciting.  TJ Waldburger takes on Adlan Amagov with an additional 120 points up for grabs in the close matchup.  Waldburger is a submission specialist who averages 6.36 submission attempts, a very high percentage in the UFC, while also landing 63.16-percent accuracy clip with his takedowns.  Amagov is a powerful puncher who can end the night with one punch, but he's got to stay off the mat to make that happen.

Waldburger's ability to drag this one to the ground, plus his ultra-aggressive jiu-jitsu game, could spell doom for Amagov.   Waldburger has picked up two Submission of the Night bonuses already, and this could be his third come Saturday night.