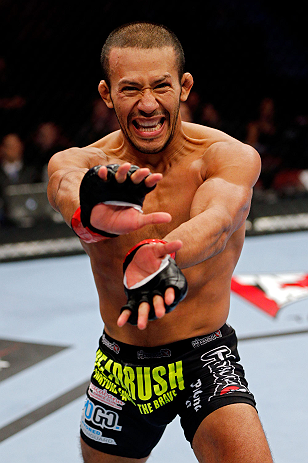 The preliminary portion of UFC 165 is going to offer up some of the closest matchups on the entire card, while giving you a glimpse into a list of future contenders and potential top ten talent.

Also on the undercard, the always flashy Stephen "Wonderboy" Thompson looks to notch another victory on his record as he faces Chris Clements, while Alex Caceres and Roland Delorme duel in a battle between two exciting grapplers.

In today's fantasy preview, we break down the preliminary card and take a look at who are the best picks and locks to walk out victorious when UFC 165 is over.

1) Myles Jury is a name you might want to know over the next 12 months. This former Ultimate Fighter alum had two shots on the reality show (one ended in injury, in the other he was eliminated) but he might be one of the talented cast members of the past few seasons. Jury is a powerful wrestler with his own style of ground fighting he calls "Jury Jiu-Jitsu" and whatever the formula is, it's working. Jury is undefeated since coming to the UFC, with a perfect 3-0 record that includes a stifling performance over Michael Johnson and a knockout victory where he finished Ramsey Nijem on the feet. Jury also has a great team around him working at the Alliance Training Center alongside notable names like Alexander Gustafsson, Phil Davis, and UFC bantamweight champion Dominick Cruz.

He won't have an easy time with Mike Ricci because he's an improving fighter, who also works with some of the best training partners in the game, including welterweight king Georges St-Pierre and Rory MacDonald. Ricci is also a southpaw, which can give orthodox fighters nightmares if they aren't ready for the left-handed attack. Where Ricci struggled in his loss in the UFC was against a physically powerful wrestler in Colton Smith who could put him on his back and keep him there. Jury can employ a similar strategy, except he's got much more technique and strength on his feet. Jury will keep Ricci guessing and will probably put him down on the mat repeatedly over the course of 15 minutes.

2) Expect fireworks when Stephen "Wonderboy" Thompson meets Chris Clements at UFC 165. Both fighters love to create an exciting standup fight, and there is always the possibility for something crazy and flashy to happen when these two are in the Octagon. Thompson wrote the book for creative striking in the UFC's welterweight division. He's a fighter with a karate background who has done kickboxing since he was just about old enough to walk. Striking comes natural to Thompson, and just like another karate fighter all UFC fans should know named Lyoto Machida, this welterweight is elusive and comes in at more angles than a scalene triangle. Clements is proficient on his feet, but only defends 49 percent of his opponent's strikes. That's probably about 51 percent less than what he'll need against Thompson. They don't call him "Wonderboy" for nothing, and with him now entering his fourth fight in the UFC, the comfort level will be there, and without much worry for the takedown, he should be able to light it up on the feet and may contend for Knockout of the Night.

3) It's crazy to think just how many top fighters that Ivan Menjivar has faced in his career, but his resume is basically a who's who of names. Menjivar is a veteran of more than 30 professional fights, and while he's certainly had some losses along the way, he's not a fighter that falls to just anybody. The names that hold wins over Menjivar include Georges St-Pierre, Urijah Faber and Matt Serra. This time around he'll take on late replacement Wilson Reis, who is a slick jiu-jitsu practitioner with eight of his 16 career wins coming by submission. He also comes into this show on a four fight win streak, and Reis isn't exactly coming in on short notice because his last fight that was set for UFC Fight Night in Brazil got canceled last minute, so he's been training and preparing for weeks now.

Reis is a great ground fighter, but Menjivar is scrappy, can scramble out of problems, and his experience factor is second to none. Menjivar's losses over the last few years in the UFC and the WEC have only come to top ten level opponents, and otherwise he's pitching a shutout. Menjivar might have to defend a lot of takedown attempts from Reis early, but once he's done, than it's his fight to win on the feet. Look for a decision victory from Menjivar who will be controlling the distance and stuffing Reis' attempts to get this one to the ground over 15 minutes.

4) Roland Delorme meets Alex Caceres in a fight that might just be the exact opposite of what we will see in the bout between Thompson and Clements. While both bantamweights are working on their striking, the ground game is what suits them best. Delorme is a brown belt in Brazilian Jiu-Jitsu and a black belt in Judo, while Caceres is an exciting grappler with four submission victories to his credit. Caceres is also a bit of a wild card in this one because he's pretty much grown up as a fighter while competing between The Ultimate Fighter and the UFC. Caceres is tough to figure out, and hard to put away.

The difference in this one is Delorme's ability to get this fight to the ground and keep it there. He's got suffocating jiu-jitsu that can confound an opponent, and he's averaging 2.6 submission attempts for every 15 minutes he's in the cage. Delorme also averages 3.89 takedowns per fight, and that's where he's going to want to shine in this one. If he can get Caceres to the mat, Delorme's quick reactions on the ground, where he's constantly looking to set up the position for a finish, should give him the edge. Caceres is not going to go away, however, so this may be a fun fight with three rounds of scrambles, submission attempts and near escapes.