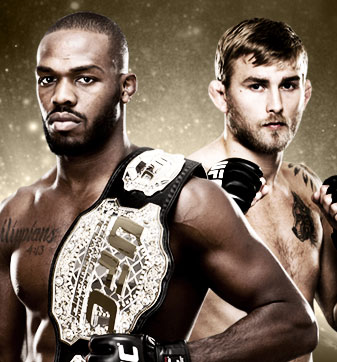 In the final four months of 2013, six out of the nine UFC titles will be up for grabs and it all kicks off with UFC 165, where both the light heavyweight and bantamweight championships will be decided.

In the main event, Jon "Bones" Jones will attempt to successfully defend his 205-pound title for a sixth consecutive time, which would break the record currently held by former champion Tito Ortiz. Jones has long talked about owning the title outright, and he has a chance at UFC 165 to solidify his place as the greatest light heavyweight in UFC history.

Doing his best to stop the Jones train from rolling on any further will be Swedish fighter Alexander Gustafsson, who will look to win his first UFC title and pick up his seventh win in a row inside the Octagon.

The other title on the line at UFC 165 is the 135-pound belt, as Renan Barao looks to make his second successful defense when he faces the first ever WEC bantamweight champion, Eddie Wineland.

The main card is littered with notable names, and in today's fantasy preview we are going to break down those fights, including the two title bouts, and see who is most likely to walk out with their hands held high on Saturday night in Toronto.

1) Jon Jones might just be the toughest matchup for any fighter in the UFC. The reigning and defending light heavyweight champion is a stylistic nightmare for virtually every opponent he will face. He's taller than pretty much every other contender at 205 pounds, has a seemingly insurmountable reach, rapidly improving standup, and wrestling that is second to none in the entire sport. Jones is a finisher as well, putting away nine of his UFC opponents, which ties the record for the most in the history of the UFC's light heavyweight division alongside Hall of Famer Chuck Liddell. Jones lands his takedowns at 61.9 percent accuracy, and he has the most submission wins in light heavyweight history.

Now, his opponent Alexander Gustafsson is no pushover. He's kind of the anti-Jon Jones in terms of his style. He's a striker with the fourth highest rate among active light heavyweights, and he stuffs 84.2 percent of his opponent's takedowns. He's also got the range, height and reach to contend with Jones' size. As good as his takedown defense has been, however, Gustafsson hasn't faced a wrestler as multi-dimensional as Jones.

Jones' takedowns are some of the most dynamic in the sport. He's not a strict wrestler that will just shoot in for double leg takedowns. He will come from unorthodox angles, land crazy throws, and he has some of the best trips in the sport today. The point is that if Jones wants this fight on the ground, he can get it there. The oddsmakers tend to agree, because Jones enters the fight as a massive -700 favorite, with the return on Gustafsson at +500. Jones just looks unstoppable right now, and as good as Gustafsson might be against the rest of the division, it's just hard to pick him against a fighter on a run like the champion right now. There might be a feeling out process early, pushing this one into the second or third round, but expect Jones to eventually get this one to the mat and unleash a blistering attack of strikes before looking for the finish by submission.

2) Like Jones, UFC bantamweight champion Renan Barao will enter UFC 165 as a comfortable favorite in his fight against Eddie Wineland. Barao sits as a -600 favorite to Wineland as the underdog at +425. Barao has looked pretty much flawless thus far in his UFC career, and beyond that, the Brazilian fighter is on a 33-fight unbeaten streak overall in his career. Barao is a master of mixing up his attacks, landing 3.94 significant strikes per minute, but he also has a great ground game, finishing four opponents between the UFC and WEC by submission. Barao does have a tendency to go into longer fights, however, against some of his toughest opponents, which means he has great cardio, but that could play into Wineland's hands in the opening of the fight.

Wineland loves a good knockout. He's got more knockdowns and knockouts than any fighter in bantamweight history between the UFC and WEC, and the fifth most significant strikes overall in the division. Wineland needs to take advantage of his power early and not let Barao get comfortable, or it could be a long five rounds for him. As an upset pick, Wineland might be worth a wager. He's certainly going up against long odds, but he has the kind of power to put Barao's lights out, especially during the first two rounds.

Still, the safe pick is Barao if he can withstand Wineland's attacks early or play the smart route and get this fight to the ground. Barao lands at 55.6 percent accuracy with his takedowns, and his best bet may be to weather the early storm from Wineland, and then drag him into deep waters by rounds four and five.

3) A battle of two middleweights looking to extend recent win streaks will happen at UFC 165 when Costa Philippou takes on Francis Carmont. This is really a clash of styles, as Philippou is a fighter who loves to stand and box with his opponents, versus Carmont, who absorbs fewer strikes than anyone in the division while looking for submissions and takedowns in the process.

Philippou might just be one of the best boxers in the UFC, with a whopping 90.3 percent of his strikes landing to the head while he looks to keep his opponents at arm's length, where he hits nearly 70 percent of his strikes at distance. Both fighters have tremendous takedown defense - strangely enough Philippou and Carmont are ranked No. 1 and No. 2, respectively, for the best in the middleweight division currently. So this fight is probably going to stay standing, and that favors Philippou. He's coming in as a favorite with -190 odds in his favor, while the underdog Carmont sits at +155. With both fighters averaging over 10 minutes per bout, it's also a good chance that if Philippou gets the job done it will be by decision.

4) One of the top prospects in the lightweight division returns at UFC 165, as Khabib Nurmagomedov takes on Pat Healy. Heading into the fight, Nurmagomedov comes in as the favorite at -225 odds, with the come back on Healy at +185. This is one underdog worth taking. As good as Nurmagomedov has been, Healy might just be one of the toughest matchups in the entire division. Healy doesn't do pretty at all in his fights, but he gets the job done. He's a huge lightweight after spending most of his career as a welterweight. Healy is a grinding wrestler that can use his takedowns to burn his opponent's cardio, while just being an impossibly hard fighter to finish. Lightweight veteran Jim Miller found that out the hard way when he faced Healy back in March, almost putting him away in the first round only to have the former Strikeforce competitor come back and finish the fight in the final minutes.

Nurmagomedov is a world-class sambo fighter with some of the best throws you'll ever see in MMA. Healy has to know that's coming in this fight, and his wrestling can act as a great counter. Healy may get down early because he can be a slow starter, but as the time ticks away he can take over. If you're looking for one underdog that's worth picking, Healy is the guy. He might get a little bloody, and things might be ugly, but he just finds a way to win.