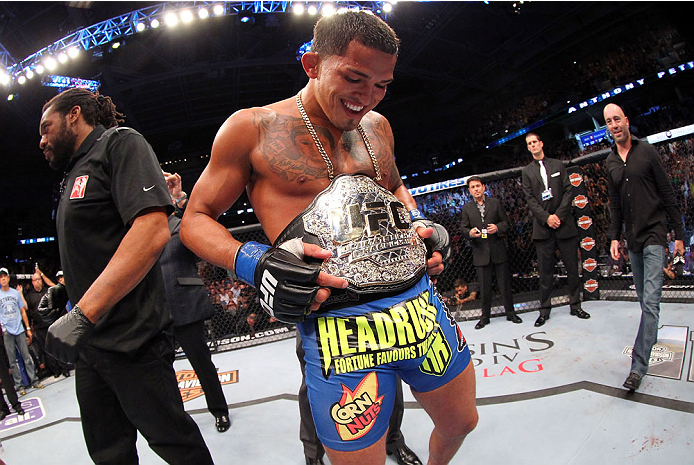 SHOWTIME INDEED
It was a long wait for Anthony Pettis to get his shot at the UFC lightweight title, yet in talking to him before the fight, I got the impression that he was waiting for someone to pull the rug out from under him. It was a mix of eagerness and trepidation, eagerness that the fight was finally here, and trepidation that bad luck would intervene again. Bad luck stayed out of Milwaukee though, as Pettis put on yet another brilliant performance in defeating Benson Henderson for the 155-pound crown. It was one of those efforts that make you say ‘oh, this guy won’t lose for a long time,’ but that usually happens after watching a fight like that. So what will keep him on top? It may have everything to do with his body. He admitted before the fight that with the way he fights, he has to train that way, and that’s made staying healthy an issue. He even injured his knee in the Henderson fight, with the prognosis waiting for a future MRI. That’s the price you pay sometimes for putting on shows like he does, but don’t expect him to change anytime soon.

A SUPERFIGHT OR UNFINISHED BUSINESS?
With Pettis taking the UFC lightweight title and immediately calling for a Superfight with featherweight boss Jose Aldo, fight fans are already salivating for a bout that might have taken place last month if not for a Pettis knee injury. And yes, this would be a super Superfight. But what about the unfinished business for both champions with their top contenders? This isn’t a case where both have cleared out their divisions and have no other option but to face each other. At 155 and 145 there is more top talent waiting for opportunities that each champion could spend a couple years taking on challenger after challenger. But I’ve got a quick solution. It’s a risky one, but hey, that’s the fight game. One card with two main events: Pettis vs. TJ Grant and Aldo vs. Ricardo Lamas. If Pettis and Aldo win, they not only have their Superfight, but they’ve built the fight up even more with the public. If either or both lose, well, that’s what happens in the UFC when the best fight the best.

WHAT’S NEXT FOR SMOOTH?
I’ve got a feeling that Benson Henderson will rule the lightweight division again. It may not be anytime soon, but anyone this good, this determined, and this gritty won’t likely be denied, even if Pettis may be his Waterloo, the guy who just has his number. Hey, it happens. And with two losses to “Showtime,” a third fight likely won’t happen anytime soon. That doesn’t mean there aren’t intriguing bouts out there for Henderson. Here’s just a few: Henderson vs. Cerrone III, vs. Gray Maynard, vs. Pat Healy, and vs. Melendez II. Nah, “Smooth” isn’t going away, not by a longshot.

THE WARMASTER’S RETURN
Some may feel Frank Mir got victimized by a quick hook in his co-main event against Josh Barnett, but given the performance of “The Warmaster” in the 1:56 the bout lasted, I don’t think things were going to get much better for the two-time heavyweight champ from Las Vegas. Barnett was on top of his game in Milwaukee, and if he remains focused and in shape and fights with a chip on his shoulder, he’s going to make things very interesting for the division in the future. Now that’s a comeback performance.

MONEY CASHES IN AGAIN
When Chad Mendes knocked out Clay Guida, all I could think of was the flush kick “The Carpenter” took from Diego Sanchez in 2009 and still kept going. In short, you don’t knock out Clay Guida. But Mendes did it, picking up his fourth straight KO in the process. I don’t think I’ve ever seen someone bounce back from a title fight loss quite like Mendes has, and once the Lamas / Swanson logjam at the top of the 145-pound weight class clears up, no one would (or should) bat an eye at seeing “Money” in a rematch with Jose Aldo. And I wouldn’t count him out of that rematch either.

LIM INJECTS MORE EXCITEMENT INTO THE WELTERWEIGHT DIVISION
I was sort of on board the first time Hyun Gyu Lim appeared in the Octagon in March, knocking out Marcelo Guimaraes in two rounds, but I may be driving the “Ace” bandwagon after his Fight of the Night knockout of Pascal Krauss. Germany’s Krauss is a top talent with a bright future, but Lim wasn’t going to get denied last night. And what I like about Lim is that he is a punishing striker, one of those guys that could tap you on the arm and leave a bruise. And if he begins tagging you, he just won’t stop until you can’t take anymore. After last night’s bout, I wanted to see more of “The Ace.” There’s no better endorsement for a fighter than that, right?

THIS AND THAT
Ben Rothwell has been a Jekyll and Hyde in his UFC career thus far. He’s looked like a world beater in knocking out Brandon Vera and Brandon Schaub, but that wasn’t the case in losses to Gabriel Gonzaga and Cain Velasquez. So what Rothwell shows up the next time? I don’t know, but if it’s against Travis Browne, I know I’ll be watching…I’m glad I’m not the only one who saw featherweights Dustin Poirier and Erik Koch as virtual mirror images of each other. But that’s not necessarily a bad thing, as Saturday night’s bout proved. I’ve wanted to see this fight since it was originally scheduled for UFC 143, I enjoyed watching it last night, and I’d love to see it again. Of course, that won’t be happening right away, and while Poirier would like a rematch with Cub Swanson, I think a Swanson-Chad Mendes fight for a number one contender’s spot after Ricardo Lamas makes sense while a Poirier scrap with Frankie Edgar sounds good to me. Man, I love the featherweight division…Winner of three of his last four, Gleison Tibau really can’t be ignored any longer after beating Jamie Varner. Now all he needs to do is win the big one, and should he get by a top ten contender in his next one, the long wait for the Brazilian to enter the title picture may be over…Tim Elliott continues to impress, and he’s got to be on the short list for a future shot at the flyweight title held by Demetrious Johnson. This kid is a scrapper and he’s willing to do whatever it takes to get the W. His dismantling of Louis Gaudinot was something to see…Australian veteran finally got his first UFC win, stopping Octagon rookie Nikita Krylov in the third round of a fight more memorable for depleted gas tanks than for the occasionally impressive attacks from both men. I get the idea of adrenalin dumps and all that stuff, but at this level, you have to be able to have more than five minutes of cardio to compete with the big boys…Al Iaquinta kept the Long Island winning streak going, returning from a long layoff to beat a game Ryan Couture over three rounds. Does anyone doubt the quality of Ray Longo / Matt Serra produced fighters anymore? Anyone??? Thought Kyung Ho Kang did enough to beat Chico Camus in their bantamweight bout, but a late upkick from the Milwaukee native probably allowed him to steal the third round and the fight. And speaking of the judging in that fight, 30-27 Camus? Come on now…Magnus Cedenblad didn’t get the Submission of the Night bonus he was looking for, but in defeating Jared Hamman, he did get his first UFC win and another shot to prove that he belongs in a division that looks a lot different than it did a year ago.