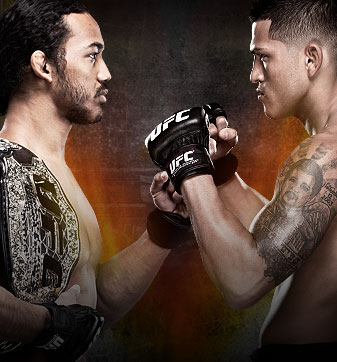 There is a lot on the line when the UFC comes roaring back into Milwaukee this weekend for UFC 164, including the lightweight championship match that will headline the card, as Benson Henderson looks to make his fourth successful title defense while searching for redemption against the last man to hand him a defeat, former WEC champion Anthony Pettis.

Also on the card, former UFC heavyweight champion Josh Barnett returns to the Octagon for the first time in more than a decade to face another heavyweight icon in Frank Mir. Barnett and Mir are regarded as possibly the two greatest grapplers in the history of the heavyweight division, so the showdown between these two legends should be quite interesting.

The undercard is also filled to the brim with talent, including two pivotal bouts in the featherweight division with Chad Mendes taking on Clay Guida, and Erik Koch facing Dustin Poirier.

In today's fantasy preview, we turn the spotlight on the main card to see the areas for potential success and possible downfall.

1. UFC lightweight champion Benson Henderson is used to going into fights with close odds. Since winning the title from Frankie Edgar in 2012, Henderson has fought to razor thin decisions in three out of his last four fights, but the key factor on his side is that he knows how to pull out the victory in the closest of moments. Henderson has the longest fight average in UFC history, so he does go to a lot of decisions, but that also means his conditioning is top notch and almost always better than the other guy. On the flipside, Anthony Pettis is a finisher who loves a good knockout. He has the most one kick knockouts in UFC history, and he absorbs the fewest strikes of anyone currently active in the UFC lightweight division. It also can't be forgotten that Pettis has a win over Henderson in their first fight in the WEC in 2011.

That's where this story takes a turn…

As much as everyone can tout Pettis' win, as well as the spectacular "Showtime kick" that capped off the night, the fight was tied at two rounds a piece going into that fifth and final round. Henderson kept it close, and while the fight is defined by that one kick, he held his own against Pettis for all 25 minutes. Henderson and Pettis have both improved since their first meeting, but the champion has the edge when it comes to activity in terms of staying busy in major fights, while the challenger has been hampered with injuries for a big part of his UFC career. The odds on this one are as close as you can imagine, with Henderson coming in at a -125 and the come back on Pettis at -105. While Pettis knows what it's like to beat Benson Henderson, he doesn't know what it's like to face this version of the champion. Henderson may fight close, but he's been fighting nothing but the best lightweights in the world for the past year and a half, and that mentality could give him a slight edge. Don't expect anyone to run away with this fight, so it's literally a coin toss, but with the improvements he's made in his striking, and going five full rounds for each of his last four fights, the edge falls to the champion for the win.

2. It's been more than 10 years since Josh Barnett stepped foot in the Octagon. It's been so long that the man once known as "The Baby Faced Assassin" got a little older, a little wiser, and admittedly a litter grayer in the beard, so the nickname had to change to "The Warmaster" instead. What's also changed is that Barnett is a much better and craftier fighter since his first days in the UFC, but he's just as dangerous. Barnett has an 84.4 percent finishing rate, and he has attempted 20 submissions during his UFC and PRIDE Fighting Championships career, tied for the second most ever. Care to guess who he is tied with? If you guessed Frank Mir, you'd be correct.

These two fighters love the ground game, but in this fight expect a lot of that to be negated given the fact that they are so prolific in that one area. Where Barnett excels is in his takedown game. His wrestling lands at 59 percent accuracy, which is 18 percent higher than the UFC average. Also a very telling statistic - when Barnett lands a takedown he's been 12-2 in his career, but when he's been taken down at least one or more times he's only 5-4. In this fight, however, Barnett is the better wrestler and he has the tricky trips and takedowns to put Mir on his back far more often than the other way around. Barnett will use his power on the outside to keep Mir guessing, and then shoot in for the takedowns to put him on the mat. Barnett is a slight favorite coming in at -180 to Mir's +155, so the oddsmakers know this is a tough fight to pick. If any major grappling exchanges take place, this could end up being the best fight on the card, but ultimately Barnett should be able to weave together enough wrestling combined with a crafty top game to keep Mir off balance for all 15 minutes.

3. Chad Mendes has earned the right lately to tout the fact that he will walk into UFC 164 as one of the biggest favorites on the entire card with -425 odds in his favor over UFC veteran Clay Guida, who comes back as the underdog at +325. Mendes has been blistering in his last three fights, winning all of them by knockout or TKO, and the total time he's been in the cage equals less than one total round. Mendes also possesses possibly the best wrestling in the featherweight division, where he's landed 19 takedowns and hits at 51.4-percent accuracy. That bodes well for him against Guida, who is a wrestler as well, but one who has struggled against grapplers with a higher pedigree. Guida's losses have never been short on excitement (outside of his fight against Gray Maynard), but his wrestling usually plays a key factor when he wins. It's hard to imagine Guida outwrestling Mendes this time around, and the Team Alpha Male fighter has found dynamite in both hands lately. Mendes wants to make a statement here to let champion Jose Aldo know he's knocking on the door for a featherweight title shot, and stomping Guida is a good way to kick it open and demand a shot at the gold. Mendes will have to deal with Guida's elusive footwork and constant movement, so he may see the second round for the first time in a while, but he should still find the right combination to put his opponent away and get the victory.

4. Heavyweights Ben Rothwell and Brandon Vera could both be best described by a line from the 1994 film Forrest Gump: "life is like a box of chocolates, you never know what you're going to get." Both Rothwell and Vera have had flashes of brilliance during their careers, but for every high there's also been a bottomless pit of low moments. Vera returns to heavyweight for the first time in five years, but he returns as a favorite, carrying -135 odds in his favor with Rothwell at +105. Vera is a good striker with crippling leg kicks, and that might be his best weapon in this one to chop the bigger Rothwell down. Both fighters can be extremely hit and miss, but if Vera can avoid Rothwell in the clinch and use his power from the outside, he's got the weapons necessary to hurt the big man early and make him feel very tired late. Vera for the win, but he has to keep Rothwell guessing for at least the first five minutes. After that, Vera's leg kicks and cardio should keep him on pace for the decision win.