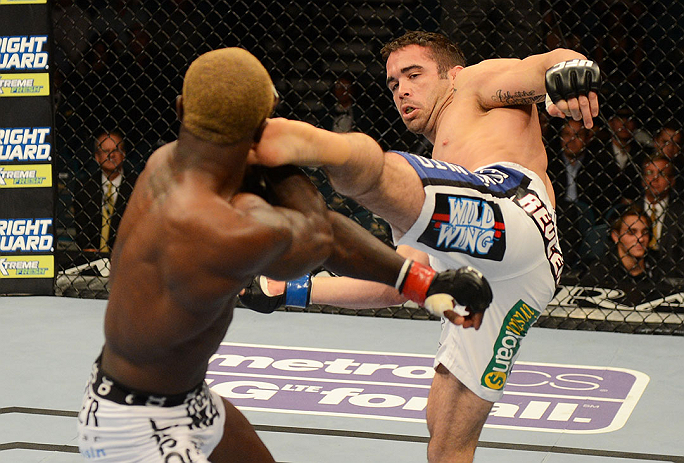 UFC 164 will offer up a tremendous main card, capped off by lightweight champion Benson Henderson and challenger Anthony Pettis in a rematch of their epic first fight, which took place in 2010 while the two were competing in the WEC.

The preliminary fights at UFC 164 also offer up some very compelling storylines, including Henderson's teammate and former opponent Jamie Varner looking for his second win in a row when he faces Octagon veteran Gleison Tibau.

Louis Gaudinot will hope to put his name into title contention in the flyweight division as well when he takes on Tim Elliott in an exciting matchup at 125 pounds, while the big boys swing heavy leather when Soa "The Hulk" Palelei steps in the Octagon against Ukrainian prospect Nikita "Al Capone" Krylov (you have to love those nicknames).

Today's fantasy preview will focus on those preliminary fights, where the points racked up really could mean as much or even more than the five main card fights taking place later in the evening.

1) It wasn't that long ago that Jamie Varner was a top ten lightweight, when he served as WEC champion and could go toe-to-toe with any 155-pound fighter on the planet.  Varner had to suffer through a down period in his life shortly after that, but he's returned to top form lately, winning two out of his three fights since returning to the UFC, and he's looked better than ever. Varner is a well-rounded fighter who has top notch boxing and a solid wrestling game behind him as well.  He's matched up with a guy on paper who is almost exactly his equal in every statistical category in Gleison Tibau. Both land takedowns at over 50-percent accuracy, both have striking accuracy at about 33-percent accuracy, but where the difference lies is in the technicality of it all.  Varner is a polished boxer when he lets his hands go, he’s very controlled, keeps his chin tucked and throws with power behind each shot.  Tibau isn't as gifted in that area, and with both fighters having a great wrestling base, it's on the feet where this fight will be decided.  Varner's quick movement and footwork should make him outland Tibau and pull of a decision victory.  Varner has had a tendency to hurt his hands in fights, so he has to be careful not to do that again here, but overall he's a solid pick and a great way to kick off the card.

2) Louis Gaudinot has a tall order on his hands at UFC 164, facing one of the biggest flyweights on the roster in Tim Elliott.  Gaudinot has a tendency to have exciting fights, and Elliott is known for the same, so don't expect this one to be boring. Gaudinot is a high volume striker on the feet, throwing over eight strikes per minute in his UFC career.  His ability to stay busy and keep Elliott on his toes could be the difference in this one.  Elliott is no slouch on the feet, but it's Gaudinot's pace that he could struggle with as the fight wears on.  Elliott is as tough as leather, so he's not going to fade and give Gaudinot an easy win, but the man with the green hair has the edge when it comes to throwing and landing strikes, and he should outwork Elliott for a decision victory.

3) There's a compelling matchup at 170 pounds on the undercard at UFC 164 when German Pascal Krauss takes on Hyun Gyu Lim on the preliminary portion of the show.  Krauss fought back in January, picking up his second win in the UFC, and lately he's been spending all his time training alongside UFC lightweight contender Anthony Pettis under the watchful eye of couch Duke Roufus.   Krauss is a carefully tactical fighter on the feet, where he throws less strikes than his opponent Lim, but he lands with better accuracy while getting hit less in the exchanges.  Both Krauss and Lim could be names to keep an eye on as they grow over the next year, but the German has a slight advantage in this one thanks to a bit more Octagon experience and the training he's had in the last few months helping his teammates get ready for championship bouts.  Krauss should be able to pull off the decision here with a smart, strategic performance over Lim.

4) Don't expect the judges to get used much in the heavyweight bout on the undercard pitting Soa Palelei against Nikita Krylov.  These guys are both fans of the knockout - combined they've finished their last 11 opponents by KO or TKO.  Neither has faced the best competition as they come into this fight, so the determining factor could be one major thing -weight. See, Palelei is a monster of a man, 6'4" walking around at nearly 300 pounds.  The problem is the weight limit at heavyweight is 265 pounds, so to get down for this fight Palelei will have to cut some serious weight, and that's always tough, especially for a heavyweight who isn't used to cutting much of anything out of their diet.  He's still going to be ultra-dangerous because he hits like a Mack truck with both fists, but if Krylov can avoid those cans of ham being thrown at him during the first two or three minutes, he should be able to fire back with some of his own.  The deeper this fight goes, the more it should favor Krylov to get the final blow and pick up the TKO victory.