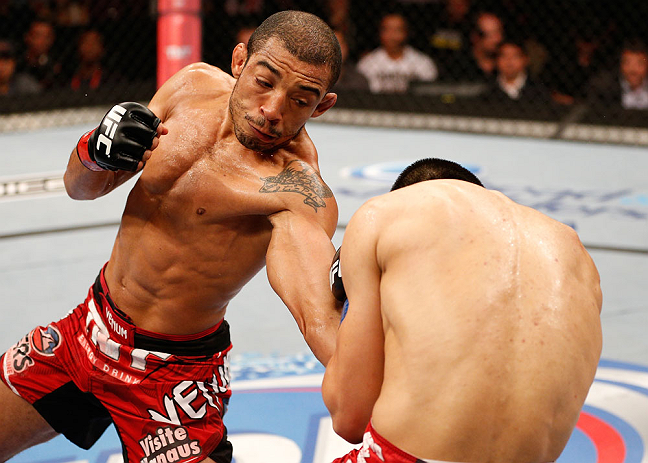 SHOULD ALDO STAY OR SHOULD HE GO?
It was another fight and another win for Jose Aldo Saturday night in Rio de Janeiro, and while his fourth round stoppage of Chan Sung Jung didn’t prompt a celebratory run into the crowd like his 2012 knockout of Chad Mendes did, it was another notch in the dominant champion’s belt to defend his UFC title for the fifth time. If you include his WEC defenses, that’s seven straight, and usually at this point you wonder who could possibly challenge him. I don’t see that being the case though, and while he would be the favorite in any upcoming title fight, I would love to see Aldo in rematches with Cub Swanson, Frankie Edgar and Chad Mendes, or in scraps with Ricardo Lamas or the winner of the upcoming Dustin Poirier-Erik Koch match. So while there’s been chatter about him moving to 155 pounds, there’s still plenty of action for him at 145.

NOTE TO THE ZOMBIE: HOLD YOUR HEAD HIGH
If you’re nicknamed “The Korean Zombie,” there’s a lot of pressure on you to fight a certain way, and Chan Sung Jung has more than lived up to his colorful moniker over the years, so there was never any questioning of his heart. But when he dislocated his shoulder in the fourth round of his title fight with Jose Aldo, he took things to a new level, continuing to fight with one arm before getting stopped by the champion moments later. If Jung would have stepped back, held his shoulder and looked to the referee to point out the injury, no one would have batted an eye or said a negative word. But Jung kept fighting, living up to his pre-fight claims that he would go to whatever lengths necessary to win the belt. He came up short this time, but it wouldn’t be a surprise to see him back in a title fight eventually.

DECISIONS, DECISIONS, DECISIONS
“Never leave it in the hands of the judges.” It’s the mantra heard throughout the MMA world, and one Lyoto Machida is likely repeating to himself this morning after losing a controversial three round nod to Phil Davis in the UFC 163 main event. For the record, I thought Machida earned the decision, but at least when the scores were read, all three judges were in agreement with their 29-28 scores. That will not make Machida feel any better, but the Octagonside officials must have all seen the same thing over the 15 minute fight, so there were no off the wall disparities with the scoring. That’s the good news. The bad news is that they must have seen something we didn’t, which may come down to the scoring system of the unified rules of MMA, and that’s a long debate for another time. Bottom line is that now Machida is out of the title picture for the near future, and that really shouldn’t be the case.

AS FOR MR. WONDERFUL
Phil Davis will certainly not get the credit he deserves for his win over Machida because of the controversial nature of his decision victory. That’s unfortunate because Davis has continued to show marked improvement in his fight game since his loss to Rashad Evans in 2012. His standup and footwork is evolving, his chin took some hard shots from Machida and didn’t dent, and his wrestling remains a dangerous part of his game. My only question is why he didn’t try to use it more. Yes, Machida’s takedown defense was strong, especially late in the fight, but an early implementation of what turned out to be an effective ground and pound attack could have paid off, not just in the fight, but in the public perception of his victory. Regardless, with each fight, Davis is proving himself to be an eventual threat to the man at the top of the division, Mr. Jon Jones.

A WELCOME RETURN FOR LEITES
When speaking to Thales Leites before his return to the UFC last Saturday, he knew what people were saying about his previous two Octagon performances against Anderson Silva and Alessio Sakara, and he vowed that things would be different the second time around. All he wanted was a chance. He got it, and he made the most of it, winning a clear cut three round decision over Tom Watson in a bout that many figured going in would be either hit or miss in terms of action. Well, it was a hit, and Leites not only showed his stellar ground attack, but improved striking and a gritty determination to win against a tough as nails opponent. Comebacks don’t often work out, but this one is going to be interesting to watch.

ONE FOR THE “OLD” GUYS
You have to feel for a fighter coming off a seven second knockout loss. When you get caught cold like that and become part of an opponent’s permanent highlight reel, it has to be tough to swallow. So when Anthony Perosh came back from his seven second defeat to Ryan Jimmo, a broken toe, and a year long layoff, to face Vinny Magalhaes at UFC 163, you just wanted to see him get a chance to perform. He did better than that, knocking Magalhaes out in 14 seconds. That makes it four wins in five UFC outings for Perosh at light heavyweight, and if seeing the 40-year-old Aussie do that at this level doesn’t make the rest of you 40-somethings smile, turn in your AARP card.